NYDN - A Bronx man who plummeted 15 feet after a sinkhole opened underneath him had to deal with a swarm of scurrying rats as he waited for help, his brother told the Daily News. Leonard Shoulders, 33, was waiting for a bus on Third Ave. near E. 183rd St. in Belmont Saturday afternoon when the concrete sidewalk suddenly cracked open and swallowed him.  “As he was falling, he scraped his face, broke his arm and broke his leg," his brother, Greg White, 22, told The News on Monday. “He couldn’t move, and the rats were crawling all over him. He didn’t scream, because he didn’t want the rats going into his mouth.” Shoulders was stuck for about a half-hour until help arrived, his brother said.

Now you're in NEWWWW YORRRK! Concrete jungle where you fall through random sinkholes in the sidewalk into deep dark pits infested with verminnnnnn, theres nothing you cant doooooo!

Something tells me this guy didnt just have a bone soaked in petroleum filled waters to create a homemade torch to disperse these rats. No. Highly unlikely. More likely this man fell into an underground pit of rats and they swarmed him. Plague infested rodents that have grown larger than the average rat because they've been feeding on slices of pizza for decades now. Larger than their cousins in the country because they have been trained and conditioned to fight for survival. Evading the footsteps of millions of humans walking through their tunnels and streets. Fighting pigeons and other members of the animal kingdom for street supremacy. They are oversized, with a thirst for blood, and no fear of humans, vehicles, or any of the other things that should ordinarily deter them. So when a human falls from the sky above they probably considered it a gift from the Rat Gods. Like the Rat Bible one day will read of the parable where the good rats who stayed together as one rat community during the Great Pandemic Famine were rewarded with 200 pounds of flesh to feast on. The Gospel According to Splinter - to the brothers and sisters who patiently wait in the darkness of the tunnels of God during the great famine, from above He shall reward your persistent pestilence with a bounty of human meat."

Anywho. Now that we're discussing this fictional rat religion I concocted in my head thriving under the streets of New York City, lets talk about reality. This right here is now added to my list of Irrational New York City Fears. The list is as follows, in no particular order:

Getting pushed in front of the subway - This one is not really irrational as it is highly unlikely. Not TOO Crazy though. One person was pushed in 2012, 2013 and 2014. So using a little smattering of data from the mid 2010's, it was a once-a-year occurrence. During that same time period, there was approximately 1.71 billion people who rode the subway. So if you rode the subway once that year, thats a 1 in 1.71 billion chance. For comparison, the chances of winning the New York Mega Millions is 1 in 300,000,000. So, way less likely than that. BUT, nobody just rides the subway once a year. We all ride the subway ALOT. So, if you take the subway to and from work every day, thats roughly 500 trips per year. Divide that 1.71 billion by 500 rides….thats 3.42 million. Theres a 1 in 3.42 million chance you get pushed off the tracks and splattered by an oncoming train. PROBABLY not worth fretting over, but also high enough to not ignore altogether. Like I ALWAYS walk on the yellow line because theres never any traffic there. Its like the express lane. I can get from one end of the track to the other real fast in that yellow stripe. So I'd imagine walking like a cocky asshole dangerously close to the edge is simply inviting a madman to push me to my death. Thats gotta increase me be like another 500. So divide yet again by 500…I'm at a 1 in 6840 chance. That means once I hit my 6,840th subway ride I'm probably getting pushed to my death. I probably have like 1000 rides left in me before I'm dead.

Terrorist Attack on the subway - Every time I'm on the platform or subsequently in a packed train, I think just how fucking easy it is to wipe out several hundred people in one shot. A bomb on someone's chest. A bomb in a bag. Some of the typical "if you see something, say something" type of shit. If you blew up a bomb at the 59th street 4,5,6 platform thats like 5 stories underground? There would be SO MUCH death and chaos its not even funny. I think about it every damn time.

Air Conditioner falling on your head - Listen I've lived in a 12th floor apartment with a window unit. I put it in myself. And you know what I dont really know how to do very well? Put air conditioners in windows. I rigged that bitch up like it was a Jenga tower. Just placed it in gently and closed a window down on it and hoped that physics would be in my favor. And I think about that every time I walk the streets in the summer. I look above and I see hundreds of A/C units, hundreds of feet in the air. Directly over the sidewalk. Just cubes of potential death, delicately hanging over all of our heads. Could you IMAGINE if one of those after smushed an innocent person below???

25 years ago someone actually died from it. In 2010 a Vietnam vet got hit by one and didnt die. Only sustained injuries and won a 21 million dollar lawsuit.

One time I was walking on St. Marks Place after a trip to McSorleys and a BRICK fell from the sky. Missed my by legit like 2 feet. Scared the FUCK out of me and ever since I've always looked up thinking "todays the day something hits me and I die."

Catching some HORRENDOUS disease from Air Conditioner Water dripping on you - This summer I got a droplet of fucking A/C water in my FUCKING MOUTH. Landed right on my goddam bottom lip. I would be lucky if I just caught Legionnaires disease. That water is disgusting. .

Falling down a grate in the sidewalk - These fuckin things? 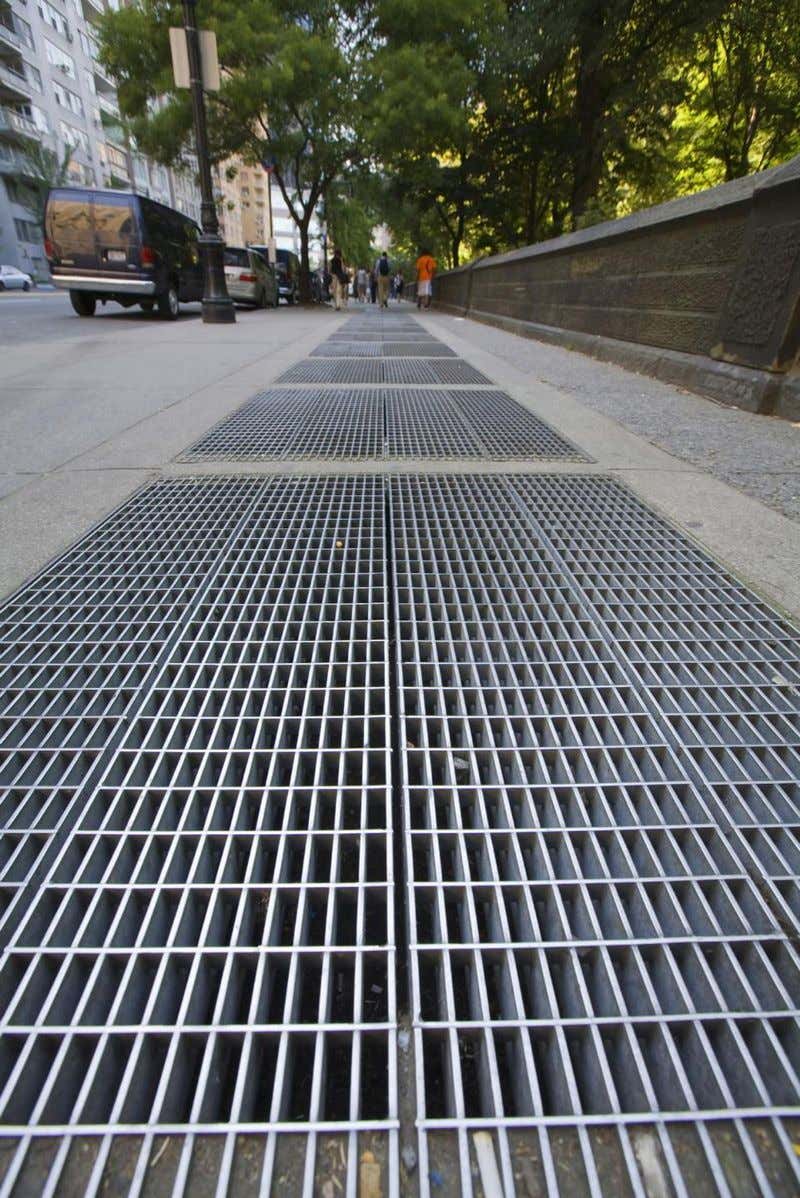 I mean, straight up, eventually you're going to fall through them. Women avoid them with high heels. OCD, scaredy cats avoid them because they think they are gonna collapse. Me? I walk right on those motherfuckers. I pray I fall through those. Right into some tunnel or sewer thats not TOO bad, and then I sue the FUCK out of the city. Those dont scare me. What scares me is:

Falling through a cellar door 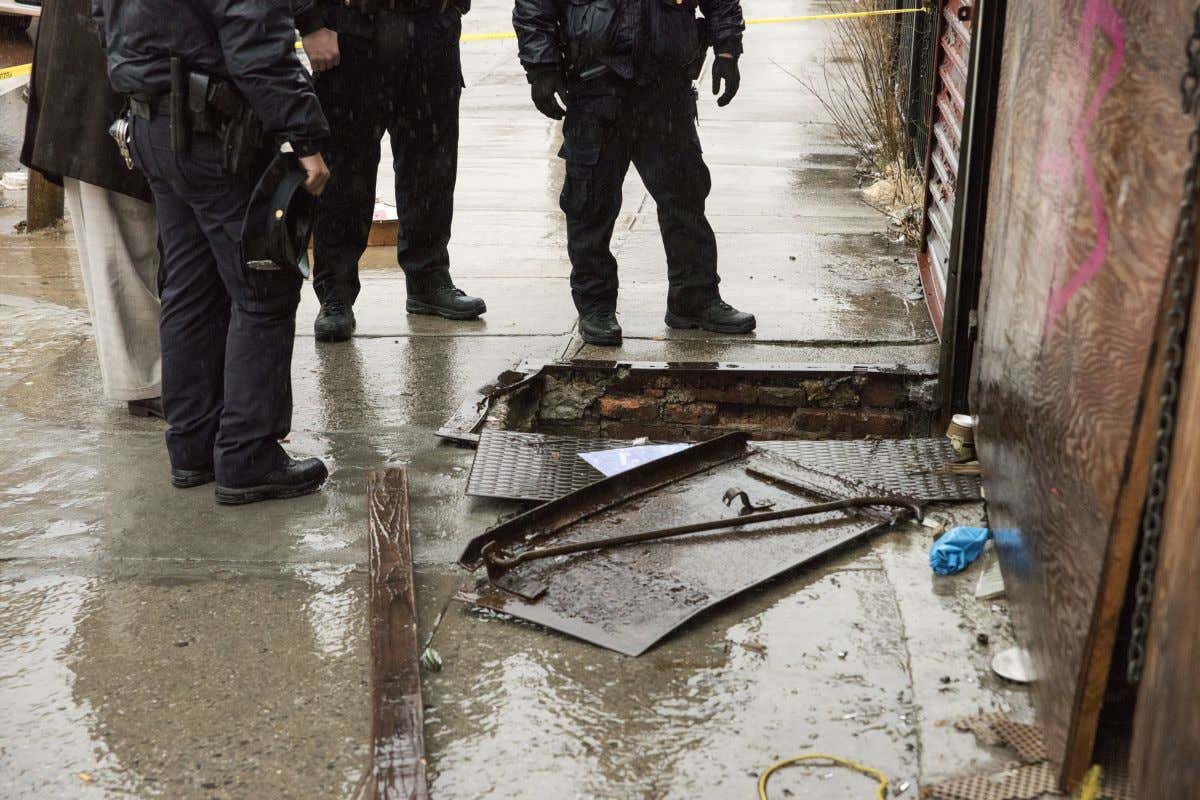 You see these things always swung open outside of delis or bodegas. They keep all their shit stored underground. Unload the trucks right into those basements. And in this era, where my head is buried in my cellphone while I walk? I'm literally typing this blog on my phone while I walk the streets of Manhattan. Its only a matter of time before I fall down one of these. And do you know what always runs through my mind?? THIS CHICK

I've seen this video a zillion times in my life and I always gasp. She just…disappears. I know its just a basement but in my mind that woman falls right to the core of the earth. Maybe right to the depths of hell. Right to the gates of Hades. Falls into Lucifer's lap. I am willing to guarantee that woman died from injuries sustained during that fall. At the very least I'll be this guy

But those scenarios are both the result of you just being a bone head, you know? Like you kinda deserve it. In the Irrational Fear highlighted in todays blog…that dude was just standing on the concrete sidewalk and it caved in. You must be SO disoriented. One minute you're on solid ground, the next you're underground and swarmed by rats. Your ankles are broken…SURELY THEY ARE BROKEN. Rats are feasting on your face. Nobody above ground is helping because they are afraid they are falling through next. Unable to even call for help or even ask for assistance because you're afraid if you OPEN YOUR MOUTH RATS WILL CRAWL IN. You're stuck…battered, bruised, and broken…swarmed by rats…for THIRTY MINUTES. I'm not kidding you, if that happened to me and I had a gun on me, I'd shoot myself. I might start carrying cyanide pills like government spies do. When they get caught they just pop that pill so they die? I'll carry it for this reason. My "Fall Through A Hole Into A Rat Sinkhole Suicide Pill." Totally rational, if you ask me.