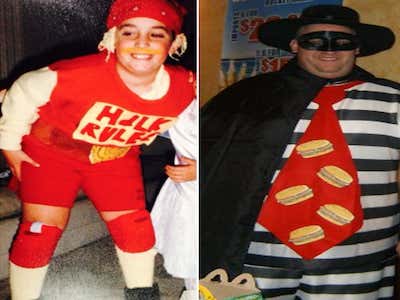 This thought randomly popped in my head since we are knee deep in SpookySZN and I was eating one of my kid's Reese's that they left lying around like a fucking idiot. Halloween is clearly an elite holiday, whether it was focused on candy or boozing. Name something more American than that. You can't.

So I'm gonna dive into this random thought I had while getting into the shower, which is a more scary mental visual than anything you will see this halloween. We'll start things off with little kids because that part of life comes first.

- Clearly candy is king as a kid. You have to dress up in a costume and put in that work walking door to door to load up your plastic pumpkin or pillow case. But heading out as a kid with your family and friends to collect what feels like an unlimited amount of confectionary treats that you can eat at any time of day and being able to pull off blockbuster trades at school puts Halloween firmly on the Mount Rushmore of Holidays. Even the grind of debating between what you are going to eat out of the D-list candy that's left at the bottom of your bag come Veteran's Day was oddly fun.

- Kids costumes rule. Whether it is something your parents worked their ass off on, something they picked up at a Spirit store that replaced some local mom & pop business, or just your typical pumpkin. Kids always look cute and awesome in costumes.

Parents, make sure to submit your best kids and/or family costumes to the Podfathers accounts on Twitter and Instagram

Halloween being on a school day isn't a bad thing because it basically becomes a joke of a day filled with movies and class parties because it is literally impossible to learn anything that someone dressed a mummy is trying to teach you.

- Finally, even though it's usually older kids at the tail end of elementary school doing it with shaving cream and eggs, bombing the houses of your asshole neighbors that either turned off their lights on Halloween or even worse, gave out bad candy, was a wonderful time even though I would want to murder anybody who did that any of that stuff to my house, which is admittedly part of the reason why I give out full size candy bars.

*In full disclosure, I am not giving out full sized candy bars this year because not one person came to our house and we were stuck with a Costco box worth of big boy candy bars, which almost killed me. So my wife overruled me and is giving out fun size this year. So if anybody in my neighborhood is reading this, Mrs. Clem is the devil that ruined Halloween in 2020, followed by coronavirus. I'll work on getting things back to normal next year because I figure there HAVE to be more people coming around this year since it is a glorious Saturday Halloween

Okay, so the little buggars had their time. Now onto when you are a savage college student.

Relaxxxxxxx, I know this is from a high school movie

- Boozing is obviously king in college because I don't know if I ate 10 pieces of Halloween candy at Siena despite being a hoss of a human. If there is something on the calendar that can give college kids a reason to drink they will take it. I wouldn't say Halloween is the number 1 drinking day in college since St. Patty's Day, [Insert Name Of Your College's Spring Fest] Day, and those days right before/after a break are all in the mix. But I definitely think it's on the Mount Rushmore of drinking days in college. You know why? Because of….

- Costumes! Now unlike being a kid, college costumes didn't mean a goddamn thing. Everyone is most likely just trying to get the easiest/cheapest/most comfortable costume possible so they can enjoy and afford more substances that can fuck them up. Don't get me wrong, there were good costumes, which were always appreciated. But your life didn't revolve around what you dressed up as.

- Ahhhhh who am I kidding? It's the girls who make college halloween an event. Whether they dress as a sex cat, a sex black cat, or a sexy black cat with a witch's hat for some reason that doesn't make sense, their asses that are most certainly not in their costumes are the reason asses are in the seats at bars and parties on Halloween.

Ladies, make sure to submit your costume pictures to the @barstoolsmokeshows Instagram account. The girl with the most likes on Monday, November 2nd at 6 PM EST will win the crown and get $1000.

I've had multiple people tell me they met their longtime girlfriends or wives at Halloween, which is funny to think about considering the "How I Met Your Mother" story for countless people is something along the lines of Ace Ventura hooking up with one of the 100 sexy cats at a bar because the way she shook her tail the best.

As always, Barstool Sports is the bedrock of democracy on the internet. So vote below on when Halloween was better.

Also as someone that is currently living in the C answer, I can confirm that having kids that dress up and get candy but forget about it a day later is pretty fucking awesome since you get all the rewards of trick or treating with much less of the work.

Actually now that I think about it, it's a lot more work for us now since we have to get our kids' costumes, get them dressed, walk with them everywhere because they are idiots that will get killed/lost/stolen if they went by themselves, and then put the candy in a spot that they don't remember. Being a parent is SIGNIFICANTLY worse than being a kid or college student. But anybody who has ever heard me speak about parenthood already knew that.