And it bred some good conversation between myself and a friend of mine who works in baseball. We were shooting the shit back and forth and I said "Glasnow blows" and "Glasnow is a 3". He immediately tried jumping through his cell phone to attempt to punch me in the face because of those abhorrent words.

Now I was obviously joking. Tyler Glasnow has video game shit. He legit might have the best pure shit on the planet, starter or reliever, and that's not am embellishment. His Baseball Savant profile agrees: 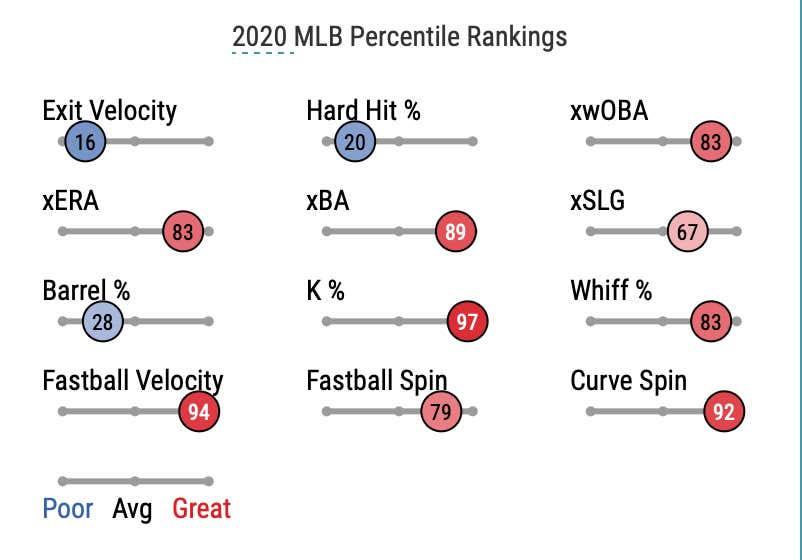 But - outside of 12 dominant starts in 2019 before his seasoned was banged due to a forearm strain - he's never been THAT dominant. So far, I would not categorize him as an ace. In due time, sure, but we'll get to how he can do that later. That's why he's got poor xERA, barrels rates, exit velos, etc.

My definition for "ace" is simple: a starting pitcher that is elite statistically. There is also a difference between a "staff ace" (which Glasnow might be) and an "ace ace" which there are only a handful of in the league. Degrom, Scherzer, Sale prior to 2019, Verlander when healthy, Cole, Giolito, etc. Not every team has an ace, but every team has their ace, if that makes sense.

Tyler Glasnow has never been elite statistically though:

Now again, that doesn't mean he can't be or won't be an ace, it just means that he's not right now. After watching him more and more under a microscope this postseason, it's crystal clear why he's not: because he lacks a 3rd pitch and doesn't command his fastball with much consistency.

Now he is a very, very good pitcher in spite of those two things. His pure "shit" is so good that he has way more margin for error than just about any other pitcher on the planet. Even when a hitter does guess the pitch and pitch location correctly off Glasnow, he's still not surrendering consistently hard contact. That's a testament to how good his shit is and nothing else. Dude is a freak of nature and with his 6'8" frame, the ball is on the hitter before he even releases the pitch it seems like.

I made a point in the convo to say that adding an effective changeup would work wonders for him. My buddy said "he's got a bazooka and a fucking 50 cal and you want him to attack enemies with a pistol"

Well said. I totally agree. His fastball and curveballs are both 80 grade FUCK YOU pitches.

And at this point in time, he shouldn't be attacking Dodgers' hitters with a pistol. His other two pitchers are legitimately unhittable when commanded well… but he doesn't command them well all that often. Often times he's behind in counts 1-0, 1-1, 2-1, 3-1, etc. His curveball's shape is one that is not mean to be commanded for a strike and the GIF above is a perfect example. It's meant to be located below the strike zone, rendering it unhittable, which it usually is. Should he be ahead in the count, it's as good a swing and miss pitch as there is in baseball.

But he's not ahead in the count often. He's got a career 4.00+ BB/9IP which is totally mediocre. When facing Tyler Glasnow, Big League hitters will simply work the count to their advantage and just not swing at deuces if they're in those good hitters' counts. Since his curveball is meant to be thrown outside the zone, that leaves hitters sitting fastball and even though Glasnow's got 100MPH heat with about 4" of glove side cut, Big League hitters will square him up often enough to score runs and win baseball games.

It's not rocket science. It's a simple formula. Get into a hitters count, lay off the hook, sit fastball, hit a gap. The Dodgers have executed this to a T twice thus far in the World Series.

But let's get back to the " bazooka, 50 cal and pistol" comment… He's right. His changeup is a pistol. He only threw one (1!!!) changeup all night last night. Now I'm not saying he should be throwing it, because he shouldn't. What he should be doing is spending the months of November, December, January and 1/2 of February developing a changeup as an effective 3rd pitch. Transform that pistol into a nuclear fucking warhead and aim it at the cities of Boston, New York, Baltimore and Toronto.

When he does that he'll be a perennial Cy Young candidate. Until then… not an ace. "Staff" ace maybe, "ace" ace… naw. I would sacrifice my first born child to the baseball gods to hypothetically have him on the White Sox, but he'd still be behind Gio and Keuchel in the rotation for me personally. That said, he's battling a forearm bug again apparently and is taking the ball any single time Kevin Cash is asking him to, and that kinda dude is invaluable. Love the kid as a pitcher, what he will one day become and for the dude he apparently is. Just can't qualify him as an ace quite yet personally.