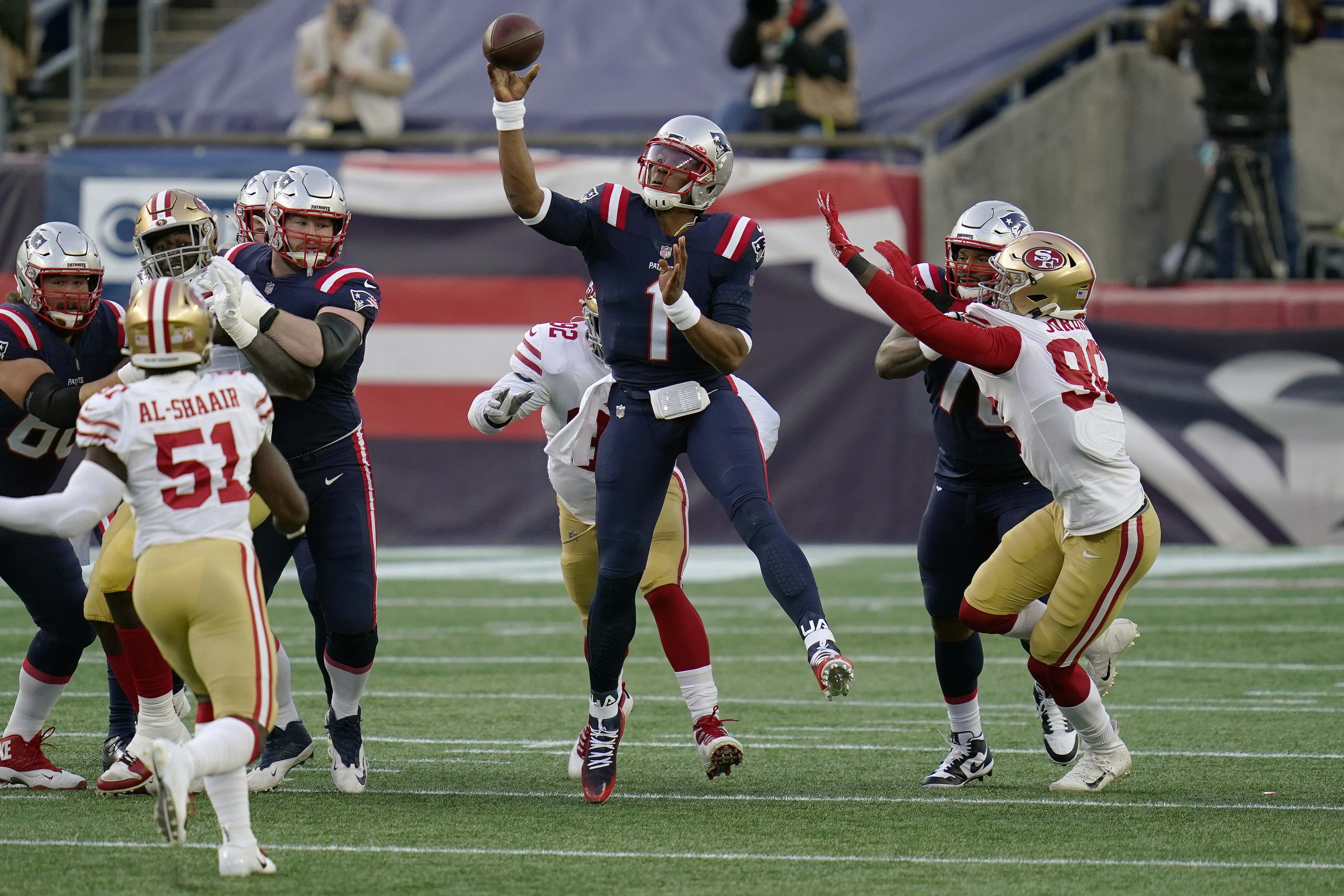 Like I wrote in the KJRs this morning, everything about Cam Newton's play seems off since he's come back from Covid quarantine. Mechanically. Fundamentally. Rhythmically. Timing … uh, timingly?

Look, I don't pretend to be Tom "The Professor of Throwing" House. Despite the legendary tight spiral I chucked when I threw out the first pitch at the Pawtucket Red Sox Free Tom Brady Night after hilariously taking air out of it with a needle as the crowd went wild. 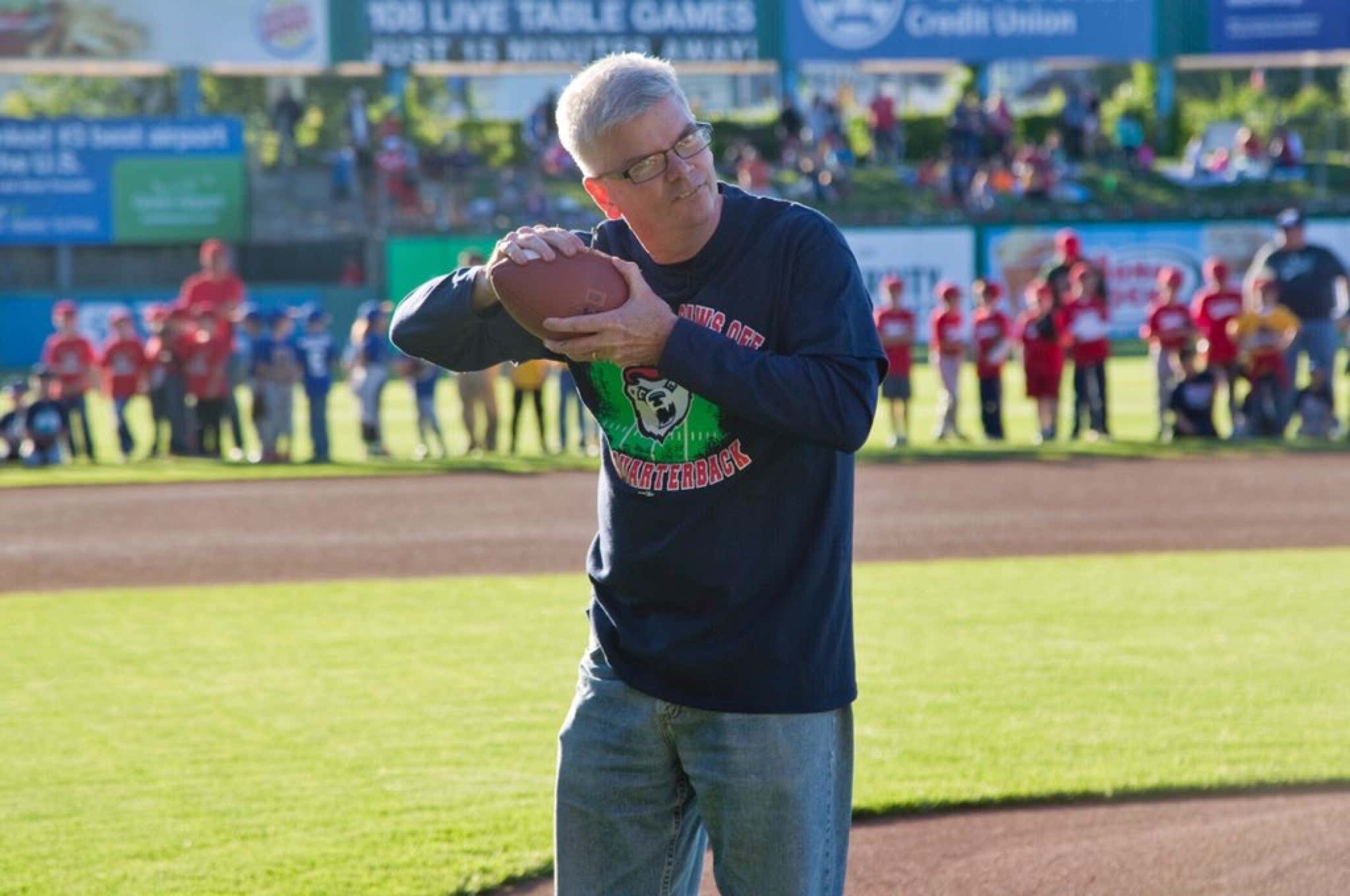 But to my untrained eye, it starts with his footwork, ending with his arm and detouring through the innate sense of spacial awareness that anticipates his receivers going into their breaks and tells the rest of the body how and when to respond. At best, it messes up his throwing motion but the ball gets there anyway. At worst, it's coming back the other way in the wrong hands. At very worst, it will cost him his job if it doesn't get ironed out.

And to the credit of some of the analytics people, the numbers are showing something I hadn't picked up on, or even heard discussed until now. Cam Newton almost never throws to one entire side of the field. And has been ignoring that side all season.

A trend that continued with his 15 throws against San Francisco:

Here's his directional chart on the season, via Pro Football Focus (paywall), with completions, attempts, yards, passer rating ("NFL") and their grading system in the white box: 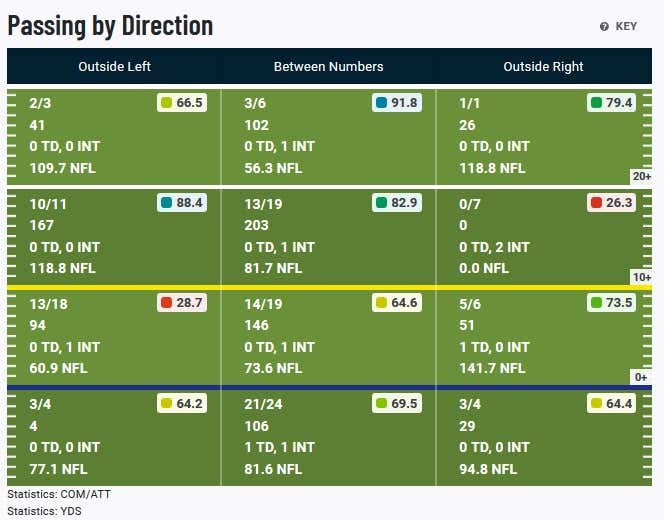 So this has been going on for all five of his games so far and I'll be damned if I picked up on it until these sources pointed it out. Cam Newton is not an Ambi-Turner.

Meaning, of course, the defense's left.

I honestly don't know what to make of it. Whether it's the result of his comfort level, by play design, or some lingering effect of his shoulder surgery, perhaps? For the most part the Patriots don't favor one side of the formation as the strong side or whatever, moving the tight end to other end or two TE sets, so I wouldn't think that's a factor. But here's a telling screencap from the Niners game where he's looking deep instead of to Jakob Johnson breaking into a wide open right flat, and being totally ignored, along with others.

Bill Belichick was asked if Newton has an issue with throwing to the right this afternoon and he was open and honest about how his staff is aware of it and bared his soul as to the cause and went into great detail about how they're working to resolve it. I kid. He set his Deflector Shield to maximum and just said, "It's important to throw the ball to the open receiver."

But it goes without saying that if the numbers indicate it and the analytics people can demonstrate it, that the Patriots staff is aware of it. Along with every other half decent coaching/scouting staff. And it makes you wonder if it'll be a problem going forward. If a right handed hitter had this kind of spray chart:

… he'd never see two infielders on the right field side of 2nd base again. So it'll be fascinating to see if the Bills overload the left side of the Pats formation and dare Newton to throw where he doesn't seem to be comfortable. Or if really does have a problem going to the right. And if he does, where did it start?

After a little digging I found this assessment of Newton's phenomenal rookie season by someone who wasn't high on him coming into the draft. It might be telling. Emphasis mine:

The biggest concern I had was his ability to read a defense and protect the football. While at Auburn, he ran his spread attack that featured his ability to make plays with his legs.

When he was asked to throw, the ball was often to one side of the field with most of the reads coming pre-snap. This concerned me, as it appears he was being protected by the offensive coaching staff.

Is this even a thing? Your guess is as good as mine. But for now I'm going to go with the theory that Belichick and Josh McDaniels are doing this on purpose, just to lull the rest of the league into a false sense of security. And once they adjust to this nothingburger, Newton will be taking off the leash and tear these cocky bastards to shreds, all up and down the right sideline and then all over the field.

Still, this is really inexplicable and weird.