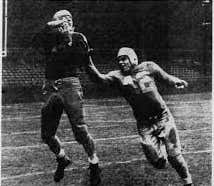 Mama said there would be days like this, and for rookie quarterback Frank Sinkwich of the Detroit Lions is a day to forget as he is intercepted seven times by the Green Bay Packers. It is part of record nine interceptions from eight different players (Charley Brock, Tony Canadeo, Irv Comp, Bob Flowers, Charles Goldenberg, Don Hutson, Joe Laws, and Andy Uram). Hudson had two interceptions as the Packers won the game 27-6 at Detroit’s Briggs Stadium.

Frank Sinkwich was born on October 10, 1920, in Starjak, Croatia. The son of a grocery store owner, Sinkwich was raised in Youngstown, Ohio. He learned how to play football on the streets of Youngstown. He was recruited to play at Georgia by Wally Butts. There he was a two-time All-American. In 1942, Frank Sinkwich became the first player from an SEC School to win the Heisman Trophy, leading the Bulldogs to a National Championship.

The Detroit Lions went winless in 1942; with the top pick in the NFL Draft, they selected Frank Sinkwich, who won his first two games. After two straight losses, the Lions earned a win against the Chicago Cardinals and entered a home game against Packers at 3-2. The Packers entered the game at 3-1-1, beating Detroit at home two weeks earlier.

Each of the Packers’ interceptions turned into points as Green Bay tallied 137 return yards, setting up three touchdowns and a pair of field goals. Don Hutson was the star of the game for the Packers with six receptions and two interceptions. The Lions would finish the 1943 season at 3-6-1, while the Packers coach by Curly Lambeau finished 7-2-1 as they set an NFL record with 42 interceptions. The San Diego Chargers would top the record in 1961 with 49 interceptions.

Frank Sinkwich shook off the bad game and had an MVP season in 1944. Sinkwich served in the military in 1945, suffering a knee injury that would bring a premature end to his NFL career. Seven other quarterbacks have been picked off seven times in a game, while Jim Hardy of the Chicago Cardinals was picked eight times in 1950 against the Philadelphia Eagles. In 1965 the Eagles picked off the Pittsburgh Steelers quarterbacks nine times in a game in 1965.