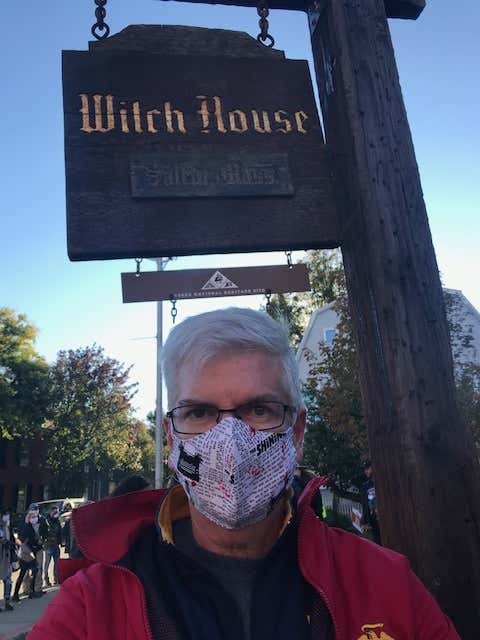 (Note the mask is based on "The Shining," with blood stains and manual typewriters and the words "All work and no play make Jack a dull boy" all over it. A gentleman of distinction knows how to dress for every occasion.)

Every city that is a true tourist destination has something unique to offer. New York has theater and nightlife. Nashville has the music scene. Orlando, its theme parks. New Orleans offers gluttony. Las Vegas, utter debauchery. And Salem, Massachusetts is a tourist hot spot because in 1692 19 people were put to death for witchcraft. Different strokes, an all that.

And so it is that at this time every year, millions descend upon this small city north of Boston en masse for that uniquest of all American cultural observances, celebrating a judicial system that killed people for practicing dark arts. This year is no exception. In spite of the fact the city government is pulling a reverse Mayor Vaughn of Amity. The Irish Rose and I paid a visit because we were up that way, and a girlfriend of hers texted to say the mayor of Salem was telling tourists not to come. Messages on the highway were flashing warnings that all civic activities were shut down. The city stopped short of ringing the place with razor wire, posting guards and putting up signs that say, "We've killed people before and we'll do it again."

But they probably should have if they really wanted their dire warnings to do any good. Because here are just a couple of street scenes: 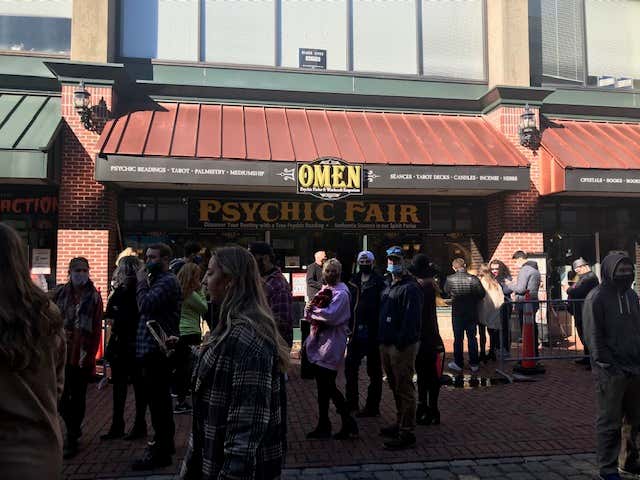 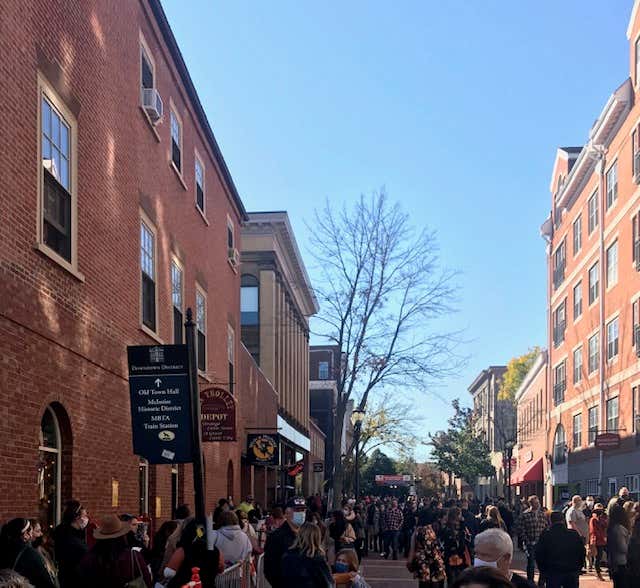 And these are pretty representative. Every restaurant, bar, museum and tourist trap had lines stretching around the corner, if not the block. The major streets were clogged with cars sporting plates from New York, Connecticut, New Jersey, all circling like sharks to pounce on the first available space to open up. Say what you will about the pandemic response in Maskachusetts, whether it's working or a gross overreaction. But don't underestimate the desire of people to visit someplace that sells creepiness the way DisneyWorld sells cheerful anthropomorphic rodents.

Just don't Covid shame us. We'd booked a walking tour that was strictly outside and masked at all times. I'm into hearing about the history and the places events took place 400 years ago a lot more than sitting inside watching an animatronic witch getting dunked by a judgy robot with a buckle on his hat. Besides, one of my favorite funtivities any time I travel isn't shopping, or going to museums or absorbing the local culture nearly as much as it's watching other people and quietly mocking them. And Salem in October is a target rich environment for that.

Besides the regular tourist trade, there are those people you just know as soon as you see them that Halloween isn't one night of the year. It's not a weekend or a season. It doesn't even begin when the Spirit Halloween popup store appears at the strip mall in August and disappears in early November. For them, it's a lifestyle. They're the ones in the Jack Skellington shirts. Ghost bride costumes. Beetlejuice suits. Zombie makeup. If there's a masked psycho who ever used a blade to murder teens after they've had sex in a movie, someone within 10 feet of you was dressed as him.

But it wasn't all just costumes per se. We walked by a shop that I don't want to mention by name, but Vamp was part of it. And the people lined up to go in were so darkly, grimly, gothically Goth that the sullen, disaffected clerk at a Hot Topic who has crippling daddy issues and a cat named Bella would look at them and say, "Geez, lighten up. And would it kill you to try wearing something with a splash of color?"

And yet, even though we never took shelter inside the door of anyplace, I couldn't shake the foreboding sense that just being at a tourist spot during shutdown had the Fun Police hovering over us, disapproving our being there. Because that was literally the case. A Mass. State Police chopper was overhead throughout the day. And when I asked a local what that was all about she said they're counting the crowd size. And will probably ban people from coming altogether between now and Halloween. How you enforce that is beyond me. Short of faking a toxic chemical spill like they did in "Close Encounters" or something. Though one method the city is trying is to enforce Resident Parking Only on all public streets just for October. Which as far as I know is the only municipality in the country that does so but just for one specific month. And I can't say as I blame them, given the throngs who turned out. One local introduced himself to me because he's a big Stoolie who recognized me from the glasses, up. And the way he put it, "I usually avoid downtown like the plague this time of year. But it IS a plague. So what the hell."

Anyway, the tour itself was a welcome relief from the dense population of Halloween and black clothes obsessed tourism. Our guide was a sincere and earnest woman in her early 20s with the general demeanor of the upperclassman who takes you on a campus tour and an enthusiastic, up-talky way of explaining the haunted history of the place. And it is a fascinating tale that bears repeating.

The SparkNotes version is this. The longer version is contained in Arthur Miller's "The Crucible," which he wrote as an allegory for the McCarthy Hearings.

Around 1692, witch trials were going out of fashion in Europe, but were all the rage in this corner of the New World. Basically anything that people couldn't explain - which was pretty much everything - they chalked up to witchcraft. There was a local minister named Samuel Parris who had been hired to run the church but hadn't been paid in a year or so, and ended up have to go to the Salem equivalent of the Lannisters looking for loans, which didn't go over well with the locals who just preferred he work for the nothing they were paying him. Around this time, Parris' 9-year-old daughter Betty and 11-year-old niece Abigail were suffering seizures and screaming outbursts. Probably due to a fungal infection. Or just plain boredom because even uncontrollable fits were probably their version of Netflix. Anyway the girls, their nanny who was a slave from Barbados named Tituba and a bunch of others were hauled off to court and tried. And by "tried" I mean were given the chance to confess and then be hung.

Tituba, for her part, did just that. A great storyteller who gave no fucks, she mesmerized the crowd with tales of how she bewitched those girls and others. Then other accused confessed as well. In all, 18 people were hung. The minister was given the chance to prove he was innocent by reciting The Lord's Prayer. Which he nailed on the first try, even though he was standing on a ladder with a noose around his neck. Only to have one of the judges say "That didn't count" and kick the ladder out from under him. The 19th was a guy named Giles Corey. He had the pleasure of a "Pressing," in which giant stones were placed on him, one by one, until he confessed. The sheriff who carried this out was John Hathorne. Who was such a notorious douchebag, that a relative of his named Nathaniel added a superfluous "w" to his name when his writing career began to take off, so as not to be associated with him. According to witnesses, as Corey's swollen tongue was dangling out of the side of his mouth, Hathorne used his walking stick to flick it back in. And when the sheriff demanded the prisoner confess, Corey went full Braveheart, gasping out, "More weight." Then finally, with his dying words he put a curse on the magistrate's office and told Hathorne he would drown in blood. Later, Hathorne died when his aorta exploded. The cause of death? His lungs and throat filled up with blood. I know I've got my dying words all picked out now.

As a postscript, I was talking to a buddy of mine who once was being considered for a job in that juridiction, at the Essex County Sheriff's Department. And he was given a whole list of sheriffs who later died under mysterious and gruesome circumstances.

Anyway, besides that we visited a church where a fight broke out over a love triangle and a young bride was killed. Both she and the minister who helped cover up the crime still haunt the restaurant on the ground floor. We saw the inn built on a site that had previously been owned by Hathorne that is one of the most haunted hotels in the country.

Also a house where an old lady died in a fire she started. Her screams were ignored by her servants because she was a miserable old wretch who treated them like the 17th century Karen she was and she died. It's now a museum that is locked up every night. But staff members find things moved around in the morning and there have been several fires over the decades the cause of which are a total mystery to fire inspectors. The house was not familiar to me. But if I was the sort of woman who owns a quilt that has "This is My Hallmark Christmas Movie Watching Blanket," I'd know the place well. 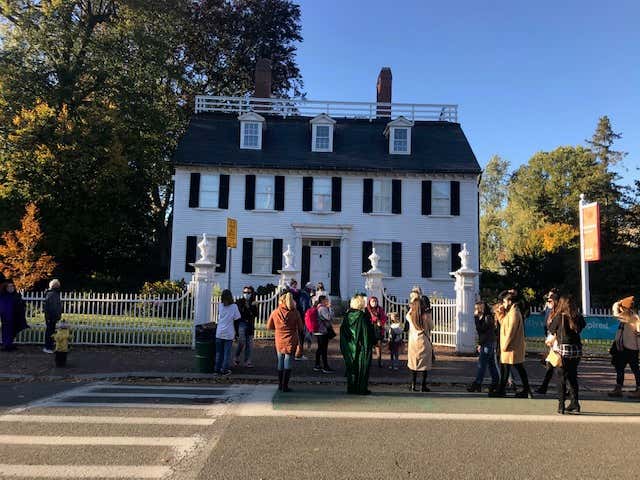 Because this was in a scene from "Hocus Pocus," the kind of movie I wouldn't watch if I was stuck on a plane and it was the only selection on the screen in front of me. But there are like a half dozen locations in Salem that are in the film. And every female I know recognizes them. And the women in the streets were positively giddy to stand in front of them. In fairness, if I went to a certain baseball diamond carved out of an Iowa cornfield or, say, a village of Hobbit holes in New Zealand, I'd be making a much bigger spectacle of myself than they were. I, after all, am a guy who got a text from my cousin as I was walking into Notre Dame stadium asking how many "Rudy" quotes I'd done so far. "About 500," I told him.

So yeah, I did Salem in the height of the total freakshow that is an October tourist season in the Witch City. For a combination of people watching, history, lore, Halloween, the paranormal, insanity and kitsch that you simply can't experience anywhere else. Certainly not anyplace as authentic.

That is, aside from the Bewitched statue that TV Land put up. 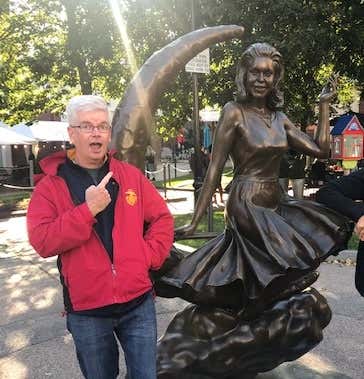 And I might consider doing it again next year. Though if I'm being totally honest, I think I'd rather just eat and drink my way through New Orleans.

P.S. Elizabeth Montgomery is an all time underrated TV babe.