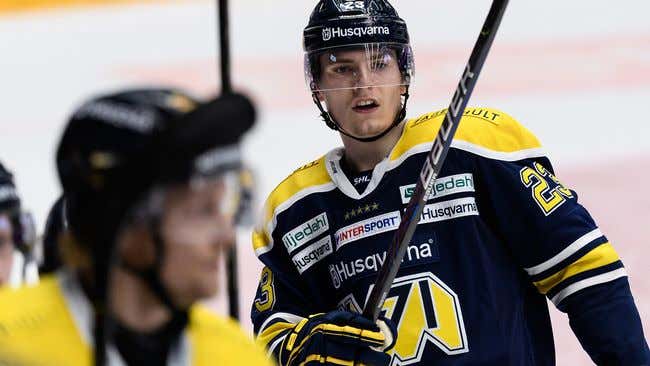 Lias Andersson has had a pretty…well he's had a pretty rocky start to his professional career. He was the 7th overall pick in the 2017 NHL Draft to the New York Rangers. He first made a name for himself in North America during the following World Juniors where he led Team Sweden to a silver medal against Carter Hart and the Canadians. He hated that silver medal so much that he ripped it off his neck and threw it up into the crowd.

Shows how much he hates losing, but also shows that he's a little erratic.

This year was particularly rough for him. He spent 17 games up in the NHL with the Rangers. After just 1 assist in 17 games, he got sent down to AHL with Hartford for 13 games. He requested a trade from the Rangers and instead was loaned to HV71 in Sweden. Obviously things just weren't working out for him in New York. Makes sense. You gotta remember he's still a kid from a foreign country coming over to play for a massive market with a ton of expectations. Not an easy situation for everyone to thrive in. So a few weeks ago, Lias Andersson finally got the trade he requested and was shipped across the country to the LA Kings for a 2nd round pick in this year's draft.

But right before the trade, it looks like he need to take some of his pent up frustration out on someone's skull.

Definitely came up high and caught the dude square in the chin. But I feel like even in today's standards, that hit gets you sent off for the rest of the game and nothing more. But you have to remember that Sweden still loves them a bit of socialism. So they hit him with a 5-game suspension and whatever the equivalent of 80,500 Swedish krona would be in dollars.

Expressen - It was on Friday 2 October that the disciplinary committee's ruling came after Lias Andersson's main tackle against Luleå's forward Jonas Berglund.

The HV star's tackle was severely punished. Despite the fact that Lias Andersson barely received a match penalty during his career, five matches were suspended and two matches were converted into fines. In addition, a surcharge of 15%, as it was considered a serious offense.

Lias is clear that he thinks it is far too harshly judged, despite the fact that a few weeks have passed since then.

Obviously we know that hockey players make a shit ton of money. But hockey players are also generally pretty good with their money. So it's not like they've just got stacks of liquid cash ready to go. So what did Lias Andersson go out and do to pay this fine?

Did you pay directly?

- I actually sold my car and paid for it.

- No no. I had the car parked at home in Gothenburg for a long time and had still intended to get rid of it. But had not taken my time. It was time now, so I went plus / minus-zero on selling the car and paying the fine.

All of a sudden, those $300 you pay in league fees for your beer league team seems like a steal. Thank god you suck at hockey because if you were any better, you'd be playing in a league that would hit you so hard with a $10,000 fine you'd be selling plasma between periods just to keep your lights on.

Hopefully whenever Andersson makes his way to the Kings' lineup, he has a veteran in the locker room like Marty Turco to hook him up with his own version of the "Nisky Mobile". He'll need it for that LA traffic.