There was 1000% a moment in that man's head where he thought he was going to fly over the balcony and down into the next section.  Just tumbling head over heels until he splattered onto the concrete of Jerry World.  I am so sure of it, I don't even have to consider an alternative.  If you've ever jumped off a cliff in the summer, you know that time in the air feels a million times longer than it actually is.  If you jump off a 30 foot cliff into the water, it feels like you have literally dropped from a space shuttle and may never land.  That's just how the brain works, talk to God if you disagree. 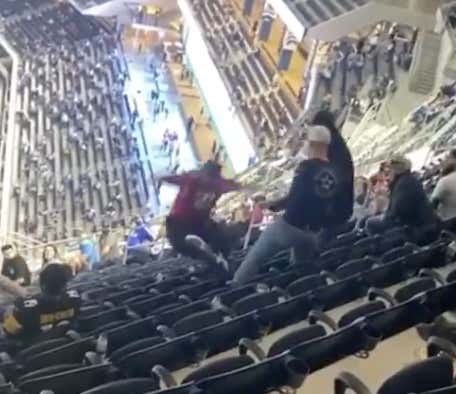 In this moment?  The guy in the red shirt was on his way to fluttering down into the Salvation Army pot like Zeke.

There is also the factor that the "high ground" guy definitely thought he may have committed a murder for that .5 seconds that his opponent flew through the air.  If that dude keeps tumbling and hits his head a couple rows down?  You just killed a man!  Its amazing we don't have more deadly injuries in environments like this.  Drunk people fighting on elevated areas with extremely hard objects all around?  Sounds like a death trap to me brother.  Glad these two lived to stadium fight another day.  Just maybe walk up to the guy's row and be horizontal with him next time, red shirt dude, and that way you won't get punted into Bolivian.