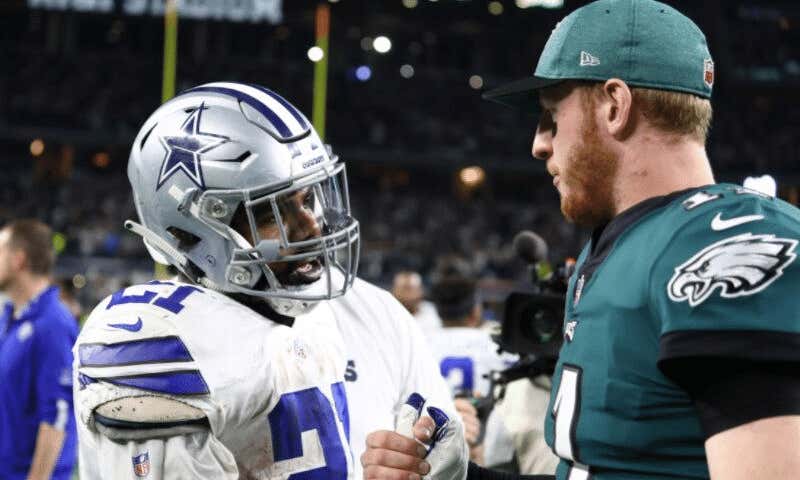 Would they win a game? I would say no.

But honestly it's an idea worth exploring. We can all agree that no team in the dog shit NFC East deserves to be in the playoffs this year. The Eagles are going to win the division at 6-9-1 and then they're going to get curb stomped by whoever they go up against in the divisional round.

So what if, and just stick with me here real quick, what if the NFC East put together an "all-star" team for the playoffs? I mean this is already a division that has one team without an actual name so what's the difference?

The thought of Carson Wentz being able to throw the ball to the Cowboys' receivers seems pretty dangerous to me. Carson has been throwing to Uber drivers and high school janitors the past 6 weeks, so going from that to guys like CeeDee Lamb and Michael Gallup and Amari Cooper would be like going from running a few miles with bricks attached to your feet to a pair of Nike Zoom Pegasus Turbo V2's. We'll also throw Terry McLaurin in the mix.

Obviously we'll just stick with guys who are healthy so unfortunately we won't be able to use the services of Saquon. But a backfield of Miles Sanders and Ezekiel Elliott should be able to keep a healthy ratio of decent plays to fumbles. But the O-line of this team is going to be so fucking horrific that it doesn't really matter who's in the backfield because the running game is going to be ass anyway.

Get the Washington defensive line. Have Darius Slay and James Bradberry at corner. Probably go Jabrill Peppers and Landon Collins at safety.

I don't know. The more I think about it, the more I think the NFC East could put together a team that could respectfully lose their divisional round matchup by 3-4 points instead of getting blown the fuck out by 24. So if the NFL cares about their ratings as much as I think they do, they probably don't want people changing the channel from a playoff game after the 1st quarter. Which means the NFC East All Stars might be the best available option to consider. They'll still lose, but it'll be in more heartbreaking fashion that absolute embarrassment.