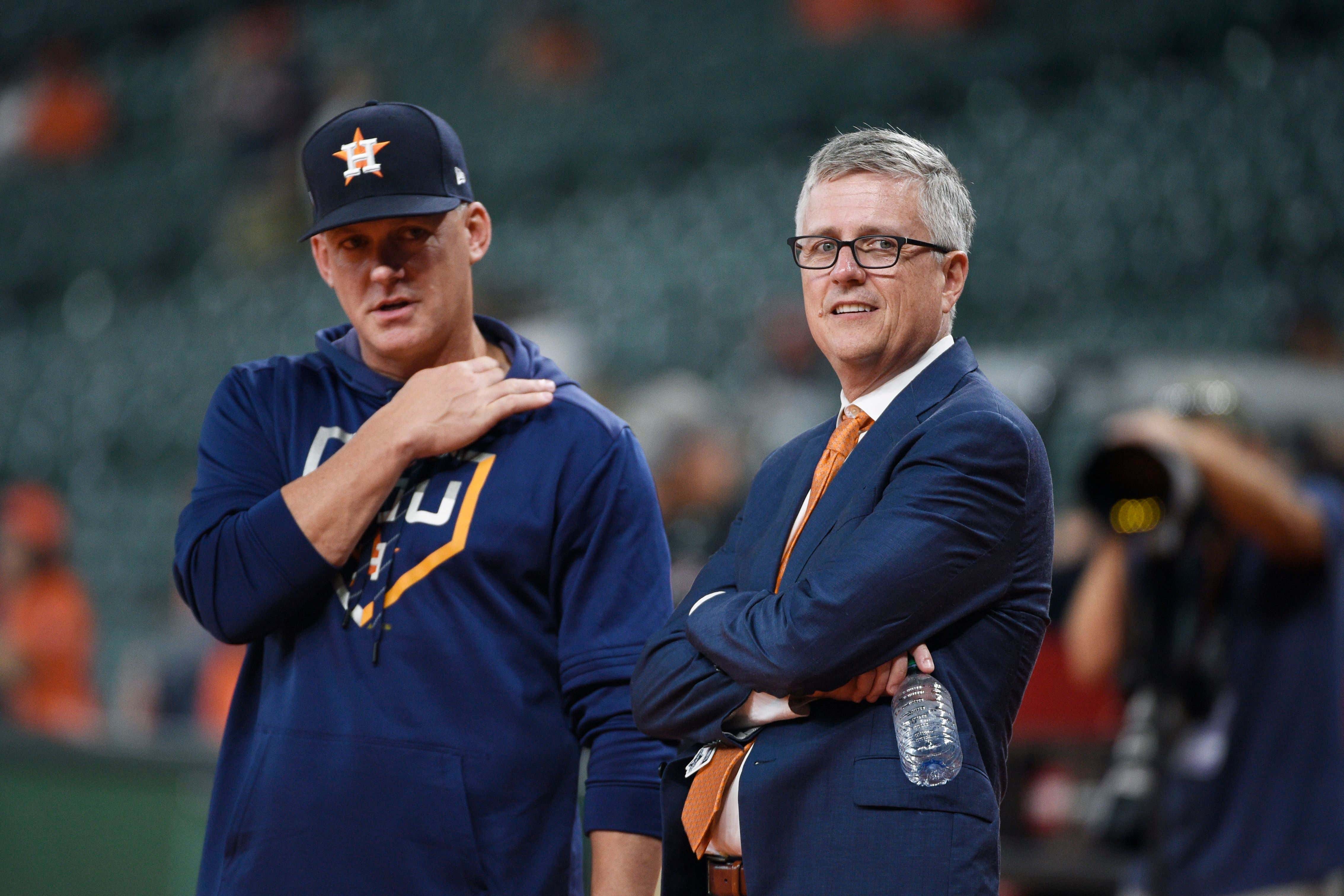 Disgraced coward and former Astros GM Jeff Luhnow finally decided to speak out publicly about the Houston cheating scandal. In a 37 minute interview with Vanessa Richardson of NBC Houston, many expected him to burn Major League Baseball to the ground with this scorched Earth approach of taking everyone down with him. Come clean about anything and everything. What does he know about the rumors surrounding other teams in regards to sign stealing? What players in Houston were specifically involved? To everyone's dismay, he basically said nothing of interest, and instead took this time to further deny himself of any wrong doing. What an asshole. Essentially he wants to have a job again in the front office of a sports team so this was his version of covering his ass. Want a quick summary of how much of a gigantic prick this guy still is, look no further than this quote.

Think about it. 2015, 2017, 2018, 2019, 2020… five playoffs in six years. Four American League Championships in a row. Two World Series appearances, one title. That’s a run that no other team has been on in baseball has been on that type of run, maybe the Dodgers, but they never got to the same endpoint that we got to.

First of all, a run no one has ever been on? So the late 90s Yankees winning four titles in five seasons and making the ALCS 7 out of 9 years doesn't hold up to the Astros run of one World Series title? Literally have no idea what he's talking about, but sure thing pal. Also, he's still taking the delusional path of bragging about the cheating and what they accomplished. How no one can say they didn't accomplish something after all of the "punishments" and public backlash. Remorseful is the last thing this guy is, as if that even matters at this point.

As I said just before, Luhnow claims he had nothing to do with this still despite being the General Manager of the team. In his eyes he delivered the coffee to the masterminds and just kept his head down. Poor ol' Jeff, innocent as can be!

Why is it all on me? And to read, I mean, everybody likes to boil things down to soundbites, or Twitter, or tweets. ‘Luhnow’s the mastermind,’ ‘Luhnow was behind this,’ ‘this is Luhnow’s culture.’ It’s not. It couldn’t be further from the truth. And I have to let people know that. My integrity is being questioned here. Everything I worked for for the past 16 years is being questioned here. And it’s wrong. I was accused of something I didn’t do. I’ll take my punishment because I was the general manager. But I’m not going to let people label me as a cheater. I didn’t have anything to do with it. And so I want people to know that.”

Jeff this was literally your culture! YOU WERE THE GM! You hired all of these guys. Drafted, signed, or traded for all of these players. What do you mean this wasn't your culture? You can't take credit for the success of the team while also accept exactly zero responsibility for how they cheated to get to that point. There is no fucking chance in the world Luhnow was innocent throughout this entire process. It is literally impossible.

He then goes on to say that the Astros are still scumbags and that the people who managed to dodge being fired by the organization are still there or in some instances promoted to higher positions. Yeah sounds about right.

One part I will agree with him on is that he claims Manfred's investigation really had no plan to go after the people responsible. He had no directive to punish players from the jump, even before the immunities were handed out. Manfred just wanted to hand down punishments to quiet the noise. Of course that completely backfired when all he did was give them a little slap on the wrist, but that's just Manfred being Manfred. He's a clown in everything he does. Throwing Manfred under the bus is something I can always get behind.

If you want to read the whole interview I've got the link here, but in summary Luhnow continues to pay the victim card. He continues to take zero responsibility for what happened because he wants to have another job in the NFL, NBA, or NHL. Could he have been a fall guy for someone like Jim Crane? Sure. Crane and Manfred are buddies, so of course the owner wasn't going to catch any of the heat. But to say Luhnow, the GM of the team, the guy who hired everyone to build this World Series team, had no idea this was going on is asinine.

This story feels like it happened 10 years ago, but in reality it's less than a year old. Fucking 2020. I'm tired of talking about it, but as always fuck Jim Crane, Jeff Luhnow, AJ Hinch, and the Houston Astros.