This may be just a random tweet by Tom Rock connecting some imaginary dots to other imaginary dots that likely don't mean a fucking thing. But I am all in on the idea of the Giants bringing in Antonio Brown now that Darius Slayton's ankle is being held together by two bungee cords, I legitimately forgot Golden Tate was on the team until he fair caught a punt in the 2nd half, and Sterling Shepard will likely be going Grandpa Simpson from the active roster to the IR for the rest of his career.

I didn't even bring up the Giants being on borrowed time with Evan Engram this season or just how much Saquon's injury eliminates the potential for a chunk play that isn't a bomb down the sideline to the aforementioned Slayton before he hobbles off the field again.

I get that Antonio Brown appears to be a legitimately crazy person and he seems to be the person off the field that everyone thought Odell Beckham Jr. was. Trust me, I blogged plenty of that shit while also thanking God he wasn't sabotaging my team along the way. 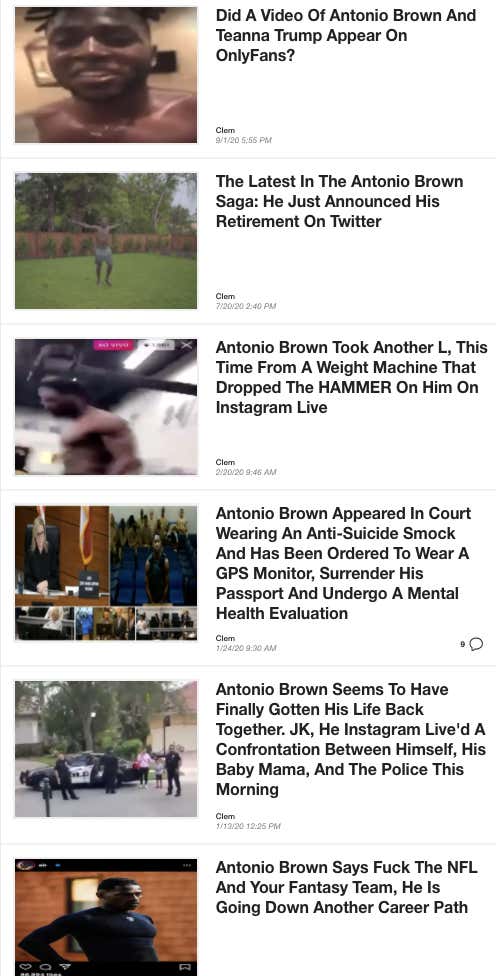 But at some point, you have to at least think about acquiring a mega talented receiver for your 2nd year QB whose top two receivers on Thursday night may be a washed up Golden Tate and a young Austin Mack playing in his 2nd career game, right? Especially if your coach happened to coach that megatalent receiver for a game where he looked pretty goddamn good (albeit against the early 2019 Dolphins) that put up a 104/1297/15 stat line in 15 games two years ago. I know a bunch of Giants fans celebrated getting rid of Odell Beckham with an online internet parade and the pieces (as well as cap space) should help the Giants moving forward. But the resulting vacuum of missing a WR1 has impacted the offense at every level.

Based on everything we've heard about Coach Judge, he won't put up with anybody's shit. If the 4th pick of the draft, who by all accounts seems like a pretty good dude, can get benched for being late to a meeting so can the guy that bounced around on 3 teams in a year that could probably be had for a very short, team friendly deal with multiple outs. If AB is a head case or lost a step or an inch off his big chest, you can get rid of him and end up in the same passing game hellscape you exist in now.

Mixing your young QB with crazy may be like sticking your dick in crazy, which is to say a bad idea no matter how good it seems or feels. But if I have to see people call for my QB1's head every game as he leads the team in rushing and is throwing to guys that literally are going from practice squad to starter in a week flat, I am going to be the one that goes crazy. Maybe not sabotage my career crazy. But potentially grow a mustache and dye it gold crazy, which trust me nobody wants to see.

So let's get some crazy back in our lives because nothing makes a football fan feel more alive than an 80 yard slant to the house, outside of a viral story that you have to spinzone in your head because the player is so talented.

Plus, at least it'll get me some fresh blogs out of it.