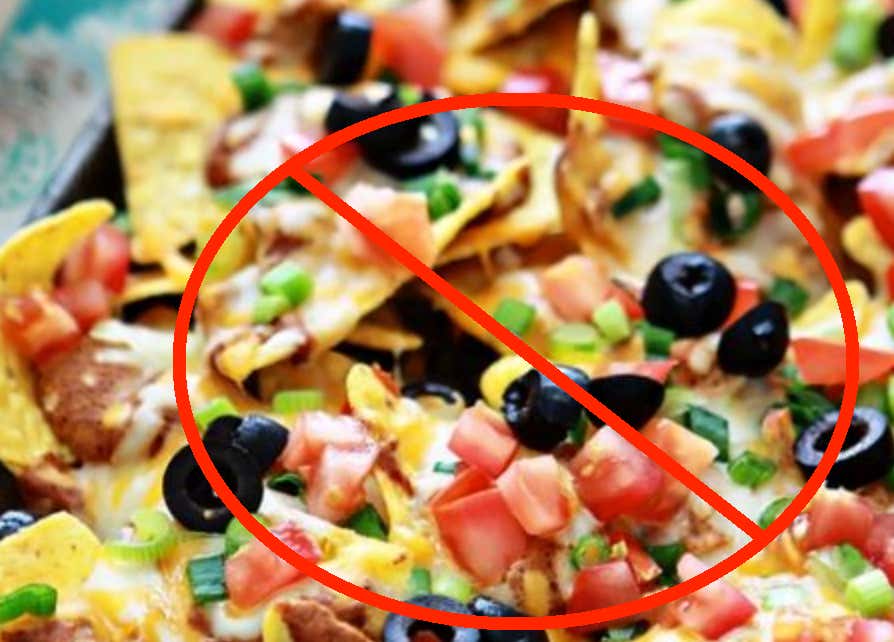 I didn't realize this had to be said but apparently it needs to not just be said, but shouted. From sea to shining sea, no less! Look, I don't like black olives in general. I find them gross. I find green olives, pickled olives, olive oil, pitted olives, and all other types of olives to be rather disgusting. But if they are on something like a salad, I can generally pick around them. But when they are tossed onto nachos, gooey delicious nachos, that is where we as a society must draw the line. There is not need to introduce something as gross as an olive to something as wonderful as nachos. None at all!

On Saturday, our table ordered pulled pork nachos. Which by the way, any time you can get a BBQ food on nachos, obviously you have to do it. I love brisket nachos the most, but pulled pork isn't a bad choice when you can get it. So they come out, cheese is oozing, the pulled pork is piled high, sour cream and guacamole in abundance, a nice scattering of jalapeños…and then mixed into all of it, dumb ass olives.

Now, if olives worked as a garnish like say, scallions, I would have no problem with them. But it's the fact they are so potent and they leak gross olive juice all over the place is why they need to be fired into space. One little olive causes absolute havoc on the rest of the food item they are on. Olives on pizza? I'd rather eat a porcupine. One tiny little stupid olive spreads its juices and infects everything in site like Dana B visiting Nashville. We just don't need it!

Now, any time someone fires off what is commonly referred to as a "take", the internet takes umbrage. No matter what it is, people will always be on the other side. But much to be delight, I'd say 90% of the internet agreed, black olives do not deserve to be anywhere near something as delicious as nachos.

To the common man that this great nation was built upon

most people agreed, get them the fuck away from me ASAP.

Now for those of you who are team olive, that's your cross to bear. You can go through life enjoying bitter salty shit on some of the best foods the world has to offer. And if you're a restaurant…just don't. When given the choice to throw shit on a plate, choose the option "don't throw shit on a plate". We will all thank you later.