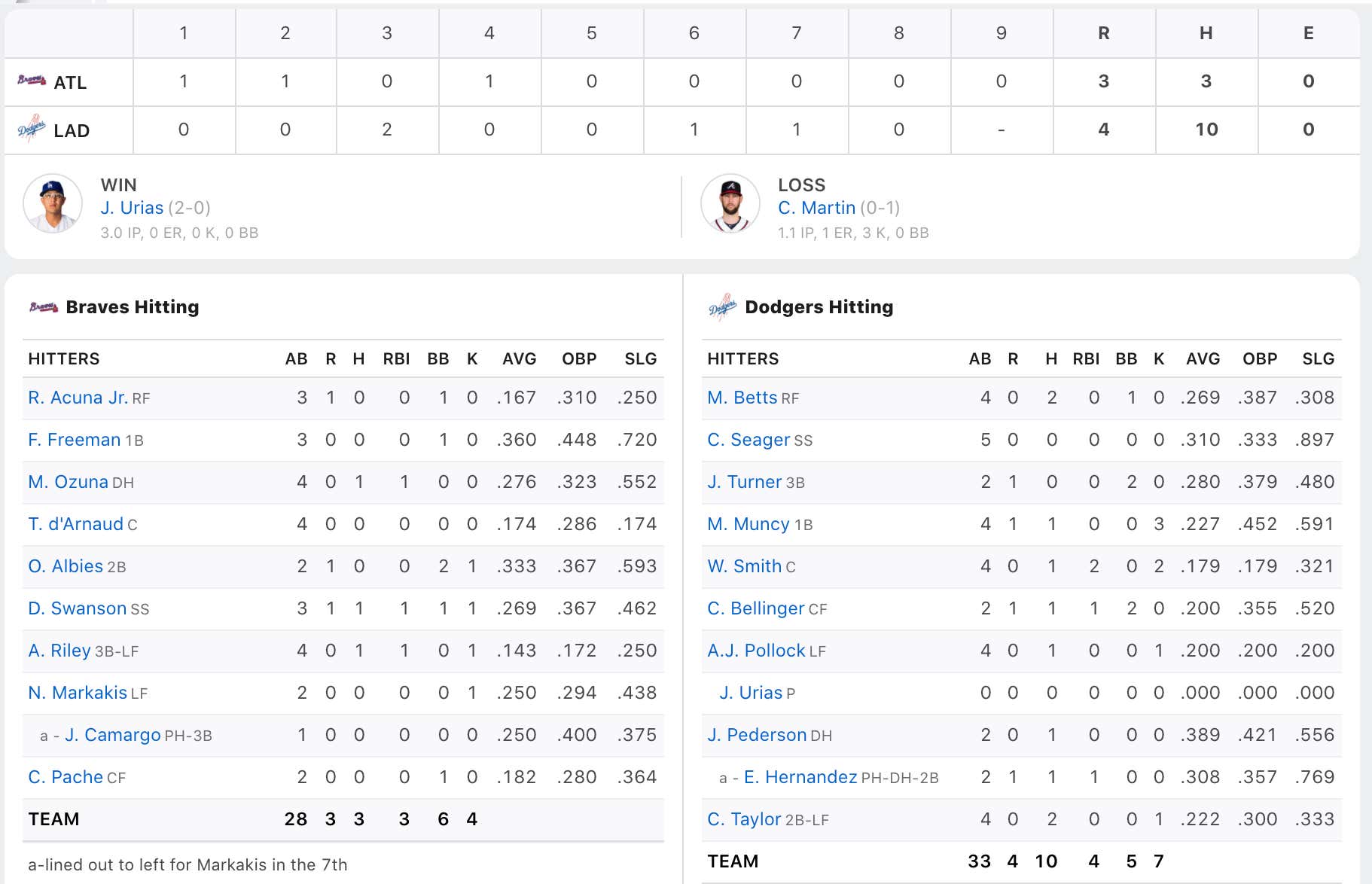 ESPN - ARLINGTON, Texas -- Comebacks complete, crises averted, the Los Angeles Dodgers are back in the World Series, determined to do what they couldn't the last two times they tried: end a championship drought of more than three decades.

Once trailing 3-1 in the series -- and down for the first five innings of Game 7 -- the Dodgers clawed back with their not-so-secret weapon: the home run. Los Angeles hit 16 in the series, tying an LCS record, and rode Kiké Hernandez's pinch-hit shot in the sixth, followed by Bellinger's an inning later, to hand Atlanta its latest sporting gut punch. Urias, typically a starter but pitching in a fireman role, was dynamic over the final three innings and secured the win.

Corey Seager, who dominated the series with five home runs and 11 RBIs, was named MVP of the NLCS.

You just knew during that 8 pitch at-bat for Bellinger, while Martin had been cruising, that a slip up was coming.

In the form of a meatball Martin left over the plate. And that little bastard Bellinger jumped all over it.

What a great game though.

Just bummed it had to come at the expense of such a young fun team to watch, and a great guy all around, Freddie Freeman.

Especially against the second-best team money can buy. Even more so when you give away outs on the basepaths with really brutal instances like this with Swanson and Riley -

And even more especially when you have Mookie doing what Mookie does, pulling a rabbit out of his ass -

for the second game in a row, tonight robbing Freddie Freeman of a game-tying dong to right.  Talk about a guy making $365 million being worth every single penny.

Not sure how that's even possible but Mookie has made it so.

It really seemed like it might have been the Braves night when the Dodgers managed to strand 8 baserunners in the first 4 innings.

But LA had been the best team in not only the N.L., but in all of baseball during this abbreviated season with a 43-17 record and a run differential of 136.

Managed by a guy in Dave Roberts who hasn't been able to get out of his way in years past, but managed his ass off tonight. No clue how he kept his job after last seasons meltdown, but congrats to him on the success getting back, and over the hump in this extremely difficult year.

Let's just hope this doesn't come back to haunt him.

Actually what am I saying? Sorry Dave, but I hope this haunts you for the rest of your life.

Fuck the Dodgers and fuck LA.

p.s. - if it's any consolation for Atlanta fans, the Falcons might actually be a decent football team without Dan Quinn.