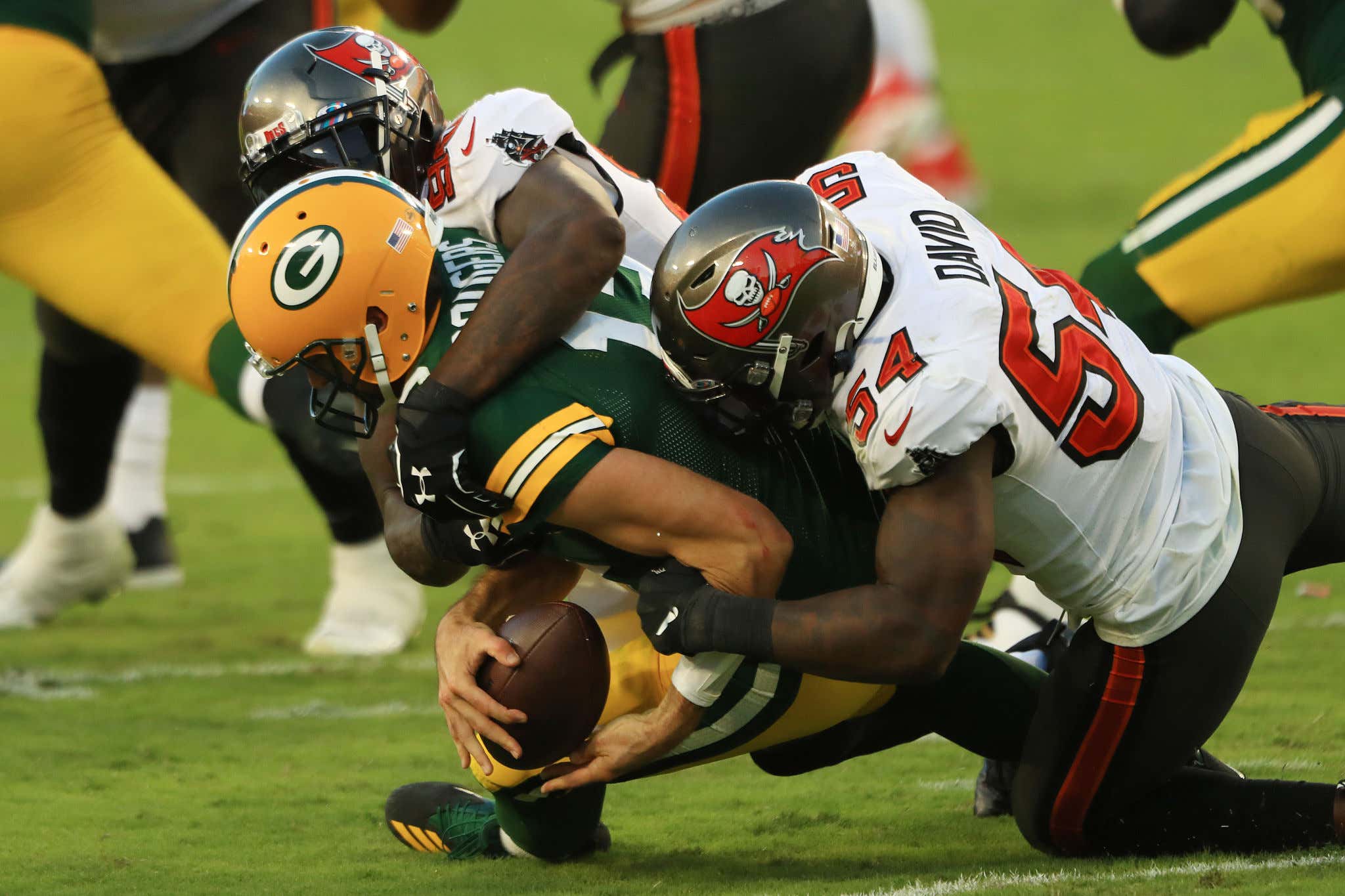 Welp. I would love to say it got better after an atrocious 2nd quarter, but it didn't. Instead, it appears the Packers went into the locker to devise a plan to increase the Buc's 28 unanswered points to an impressive 38! 3.8. Honestly, it's so bad that it's almost ok. I'm not going to look it up because I don't want to be disappointed if it's not, but I'm pretty sure that's some sort of record for terrible performances.

Of course, you don't just allow 38 unanswered points when one side of the ball is having an off day; that kind of monumental shit is a team effort and it starts with its leader.

I know what you're thinking, but no, I didn't cut and paste Aaron Rodgers' name over Daniel Jones' games stats. In fact, if my memory serves me correctly (which it usually doesn't), I'm pretty sure Jones did throw 2 picks in week one… along with 2 touchdowns. Rodgers was touchdown-less today.

He came into week 6 with the highest QBR in the league simply because he was playing at an MVP, lights-out level. Just stupid, stupid good. Through 4 games, he put up 13 TDs and 0 INTs and if you look at his numbers from his last game, it's easy to see how.

Those numbers are basically on the opposite end of today's spectrum and those numbers reflect an Aaron Rodgers without his #1 receiver and without Equanimeous St. Brown. Both were back today… yet the offense was worse? I don't know. I don't know what happened.

Everything just sort of fell apart after Hingle McCringleberry! What I initially thought was a worthy and honorable tribute to a legend, turned out to be the Grim Reaper himself! It was almost like Rodgers' thrusts hypnotized the entire team into believing their professional football skills were no longer a part of their beings. Kinda like in Office Space, except instead of getting promoted for not giving a shit about their jobs, everyone accidentally burns inside the building.

Only the workings of the devil could explain why Rodgers made some especially bad throws (in addition to the two interceptions) and missed on wide-open targets. Well, that and the struggling offensive line, a ground game that never took off, and an unusually conservative play-caller in Matt LaFleur who clearly (and rightfully) started to lose confidence in his offense.

On the plus, congrats to you if you're a Rob Gronkowski fan because it appears the Packers defense has revived his career! Gronk can't really run and he hasn't done much in years, but today he looked spectacular! Either he magically found the fountain of youth or this D was just that awful!

Considering they were penalized for having 12 men on the field twice in 4 plays - on top of just looking like total trash - I'm gonna go ahead and give Mike Pettine's primo defense the credit. Preston Smith, Za'Darius Smith, Kenny Clark - not one person showed up. Not even because the offense desperately needed them to.

BUT… it's one game. Aaron Rodgers looked flustered, out of sync with receivers, and yes, he threw two picks, but not only was the second one not his fault, they were the only picks he's thrown this season. This game does not define who he is or what kind of quarterback he's going to be moving forward. The facts are: he's the happiest anyone has ever seen, he loves Matt LaFleur, their relationship appears to be getting stronger by the day, and he was playing the best ball of his career leading into this game.

Today just wasn't his day, and considering the team's success depends heavily on him, it just wasn't the Packers day.

And that's ok because I know Rodgers is going to be absolutely FIRED up next week.

In the words of G.W. Bush: can't get fooled again.