Listen, I'm not going to sit here and act like we're the favorite to win the Super Bowl right now. But I'm also not going to sit here and allow you to tell me that the Browns stink. At this point in time, without one of our two best players, we are 4-2. And 4-2 after six games translates to approximately 11-5. And if you think any person in the city of Cleveland wouldn't take the Browns going 11-5, you're crazy.

AND we've already played at Baltimore and at Pittsburgh. We still have the Bengals, Eagles, Jaguars, Jets, and Giants on the schedule. So yeah, at this point in time, we're clearly not on the same level as the Ravens and the Steelers. I get it. And while that stinks because we're the 3rd best team in the AFC North, we're still one of the best 7 teams in the AFC. This team is still making the playoffs. Going on the road and losing to an undefeated team did not change that. No doubt in my mind.

What today did leave some doubt in my mind was the play of Baker Mayfield. Let's make one thing clear first though: Joe Montana wouldn't have led the Browns to victory today. We got beat every which way by a better team. But Baker Mayfield playing like complete asshole didn't help either. A 9-year-old Pop Warner player would've made better decisions with the ball. So yes, I support putting in Case Keenum at the end of the 3rd quarter. I'm not sure Baker is the guy for years to come, but I am positive that Case Keenum is not the future of this franchise. So there is NOT a QB controversy in Cleveland right now. Stefanski better make that clear in the post game press conference.

And another thing that better be crystal clear in the post game press conference is that Baker Mayfield came out of the game because he was awful today, NOT because he was injured. I know he was pretty beat up heading into this week, but when we pulled him at 31-7, it was because of his play. If the score was reversed, there's no way he would've been coming out. He would've been running around, swinging his arms and telling the world how good he is. So we better not see a disappearing act in the postgame when he's supposed to be answering questions. Or even worse, we better not see a LeBron James move and have any casts or braces on when he meets the media.

Speaking of media, I can't wait to see how they handle OBJs "antics" this week. I'm not too concerned about it, but my dude was in socks with 8 minutes left in the game. 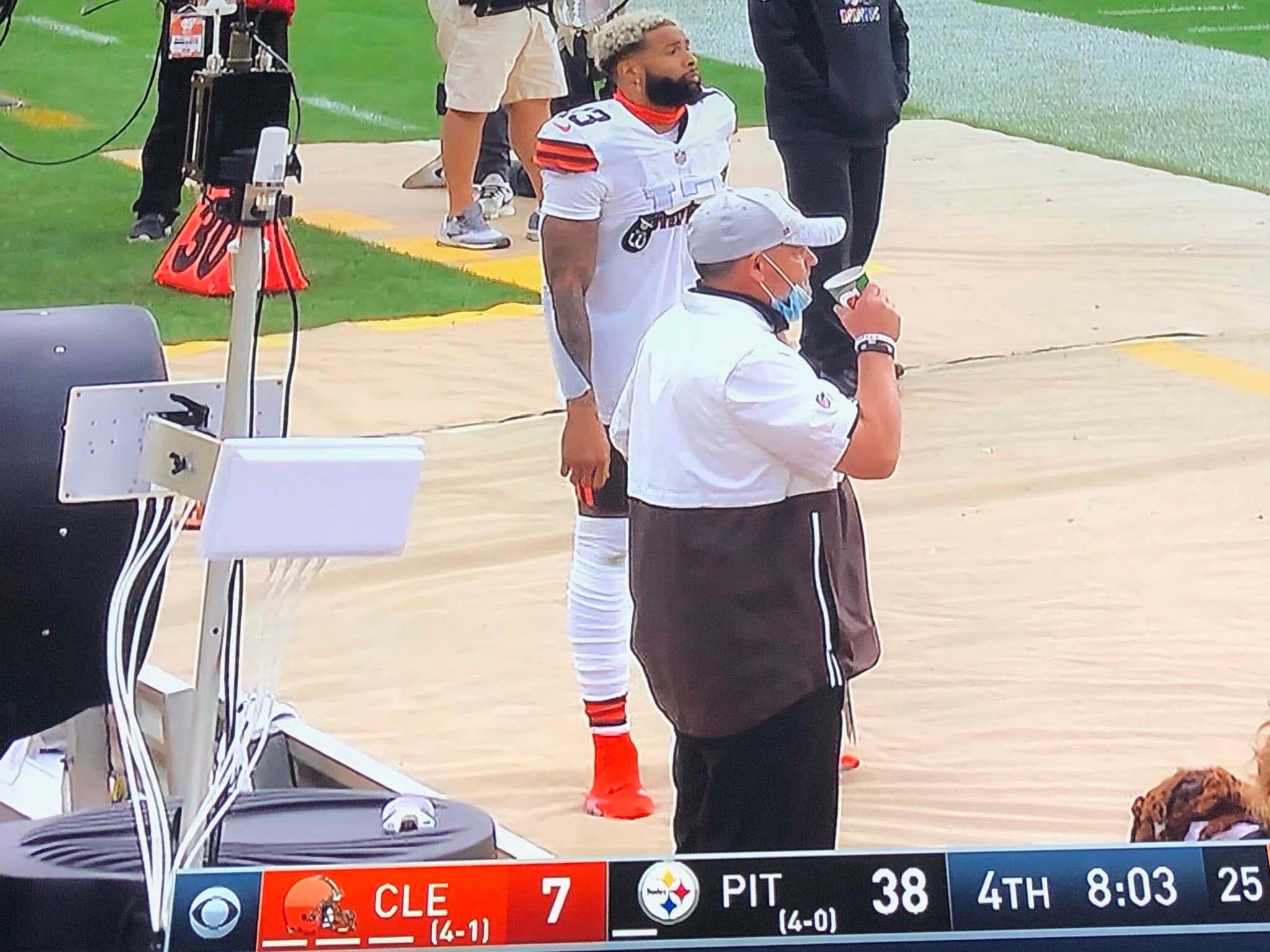 Why can't you leave your shoes on, Odell? Again, not a huge deal, but I'm sure Colin Cowherd and Skip Bayless will be all over it tomorrow. Another distraction. Then again, we probably need a distraction after today. Ugh.

Guys, today sucked. No other way to put it. The Browns lost for the 17th straight year at Pittsburgh. And I'm here to face the music, like I expect my quarterback to. But let's not make a mountain out of a mole hill. Losing to both of your rivals by 30+ stinks and shows we're not as good as some of these delusional Browns fans wanted to make us out to be, but we're still 4-2 heading into Week 7. We're still a playoff team. Who wouldn't have taken that 6 weeks ago? We're onto Cincinnati.