The Tweet above came across my timeline earlier and as a lover of all things 1970s MLB, I had to watch the clip of the best jersey'd World Series ever. Led by the lovable 39-year-old NL and WS MVP Willie Stargell, the 1979 Pittsburgh Pirates came back from a 3-1 deficit to capture the title in Baltimore. The "WE ARE FAM-A-LEE" Pirates became beloved champions of that era.

But let's rewind that tape a little. I think I caught something... 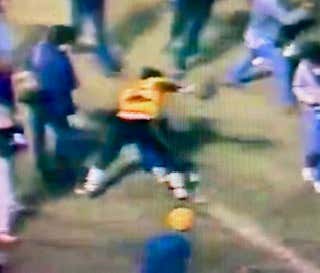 Yes, that's catcher Steve Nicosia pounding on a fan with his tool of ignorance that contains the most metal. For the 1970's and '80s, this was par for the course. Fans just running amok among the players in the euphoria of a championship win (I ran on the parquet after the '86 Celts win but you couldn't sniff the floor when they won it in '08). Occasionally, a fan would get fucked up or go ass-over-tea kettle and, well, you put yourself out there and shit happens.

The other absurdity from this clip is Pirates closer Kent Tekulve, who just seconds earlier was celebrating his career peak, going absolutely apeshit and being held back as he looks for the asshole who stole his iconic pillbox lid. 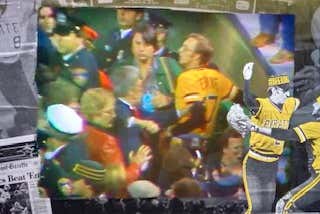 Tekulve: I don’t know who, but somebody (not Spuria) got my hat. If you look at the highlight film, we get the last out and everybody runs out (of the dugout). I jump up and down, Nicosia catches me, the rest of the team gets there and then all of a sudden, the mob comes. Somebody reached in and grabbed my hat. About 15 minutes later, a security guard came into the clubhouse and gave me my hat back. He’d seen some kid take it.

Whew. Glad to know Teke got it back. But the clip of the catcher pounding on the fan has a hell of a backstory that a follower thoughfully brought to my attention.

(The Athletic) -- Neil Schwartz wanted to snag a special piece of memorabilia from the 1979 World Series. Instead, he got a beatdown from Pirates catcher Steve Nicosia.

The incident — we can’t really call it a brawl, because Nicosia threw all the punches — took place along the third base line at Memorial Stadium, moments after the final out of Game 7. Nicosia retaliated when Schwartz, a 19-year-old college student, tried to rip the catcher’s mask out of Nicosia’s hand.

The whole thing lasted just a few seconds. As an ABC camera panned the field during the postgame celebration, it caught an image of Nicosia clobbering a fan who was lying curled-up on the grass. The fan was never identified and Schwartz, who was not injured, kept his role in the fracas a secret.

“For years, I didn’t tell anyone this story,” said Schwartz, who now works as an NFL player agent. “It’s not one of my prouder moments in life.”

If you have the time, The Athletic's oral history is well worth the read (paywall). But here are a few gems from it.

Schwartz: Back in the day, you used to be able to jump on the field and celebrate after a big win. We used to do it all the time. After Game 6, we went scavenging in the stadium. We went to a box where President Jimmy Carter would sit (during Game 7). This was before cell phones, remember, so they had a hard line set up for Carter. There was no dial on it, just a big red light. It looked like the “bat phone.” We found that phone just sitting there abandoned, so we took it. We took Jimmy Carter’s “bat phone.” We used it in our dorm room. I wish we would have kept it, because it would be worth a lot now on eBay.

Schwartz: It was bedlam on the field that night. It was bananas. And the Pirates weren’t even the home team!

Nicosia: It was crazy. The thing that bothered us so much was the fact that the Baltimore police were there, but they were just letting the people run right by them. They just stood there watching.

Schwartz: I put my hands over my face while he just pounded away. When I was little, two of my permanent teeth never came in. I looked like a hockey player. My dad paid for dental work. He worked really hard to pay for it; it was a financial burden. So when (Nicosia) is whaling on me, the only thing I was thinking about was, “Don’t bust my mouth! My dad will kill me if you break my teeth.” All his shots landed on my forearms and ribcage. If he broke my ribs, I’d be good. As long as he didn’t bust a tooth.

Spuria: I went over and said to Neil, “What are you thinking? You picked the most well-protected, toughest guy on the field to pick a fight with.”

Schwartz: I said, “You’re an asshole. He beat the crap out of me. Why are you laughing?” He said, “Nah, you’re fine.”

Spuria: He was a big Yankees fan, so he wore his white Yankees satin jacket to the game. I was a big Red Sox fan, so I was wearing my blue Red Sox satin jacket. We thought we were the coolest things going. And there he is in his bright white jacket, getting the crap beaten out of him on national TV.

Schwartz: The next day, I called my parents in New Jersey. My sister answered, and I told her I went to the World Series the night before. She said, “It’s funny you mention that. Dad was watching the game and saw some putz trying to steal the catcher’s mask and he got his ass beaten up!” I told her, “Tell Dad that putz was his son.” My dad was not too pleased: “I send you to college and you get your ass kicked on a baseball field?”

You just hate to see it.

But the story has a nice ending.

Three years ago, Schwartz’s wife sent Nicosia an email, explaining that was her husband on the field that night. Nicosia extended an invitation for drinks if the couple ever was in Atlanta, but they never followed up on it and fell out of touch. A few weeks ago, The Athletic helped Schwartz and Nicosia reconnect. When Schwartz made a business trip to Atlanta on Dec. 7-8, he and Spuria finally visited Nicosia. The former player was happy to sign a couple pieces of memorabilia for his guests.

It was a friendly reunion. There were apologies all around, followed by a cookout and some picture-taking with Nicosia’s World Series ring. And there was a lot of reminiscing …

Schwartz: I just had to ask him, “Can I have the catcher’s mask now, please?”

Nicosia: Five minutes after the game was over in the clubhouse, they asked for the mask to be donated to the Smithsonian Institution. That’s where the mask has been ever since. I saw it once about 20 years ago. In Pittsburgh, every place I go, every media person I talk to, the first thing they ask me about is, “Hey, there was that kid who came on the field…” I must have told the story at least 500 times. When we talked on the phone, Neil said, “I was young and stupid. I invaded your space.” I told him, “I was young and stupid, too.” And we started laughing. He said, “If I could take it back, I would.” It was nice to finally meet him. We took some pictures, I bought some cigars, and we had some beers. It was a good time.”

This is actually all a heartwarming story that goes back to a much different time and reminds people that we were all young and dumb once, forgiveness is easier than a grudge, and, yeah, sometimes a person just has a good whack coming to them.

Tekulve: I told Nic a few years later, you look at that film, I jump into the air, he catches me. For the two of us, it was the happiest moment in our entire lives. We won the World Series. Thirty-five seconds later, he’s beating the crap out of some guy and I’m as mad as hell, looking for the guy who stole my hat. How things turn in 35 seconds.