When you're enlisted in the military you live full time in 'the suck' with few exceptions.

That commercial where the Marine in Dress Blues was slaying the dragon was badass, and the "Army of One" ad where the soldier is doing all sorts of high-speed tactical shit via night vision is sweet, but so far that hasn't been your experience. You're just cleaning toilets that are already clean & getting yelled at for a variety of utterly stupid things beyond your control. The amount of 'shit rolls downhill' bull-crap you endure is awe inspiring.

But you do endure it, and in great part because 'misery loves company' rings true; you're surrounded by others going through the same thing. The key to enduring the suck is embracing it. And "embrace the suck" is done in all sorts of ways, but one of the biggest is though the dark humor you share with each other. Especially in the infantry, which I think these guys are.

That's what I saw in the video above and why I laughed watching it. These soldiers look like they're stuck in some sort of holding platoon where 'hurry up and wait' is the norm, where they probably get stuck playing 'fuck fuck games' (superiors coming up with pointless & annoying stuff for them to do so they're not doing nothing), and so a common note becomes, "Oh man, my asshole recruiter never mentioned this part." No dragons to slay, no stealthy Army of One. Only a unit cleaning out a dirty conex box by placing the gear into... mud:

That's why I was annoyed seeing the slew of hot takes pouring in about these 'poor kids being taken advantage of by their recruiters' based on that first video. 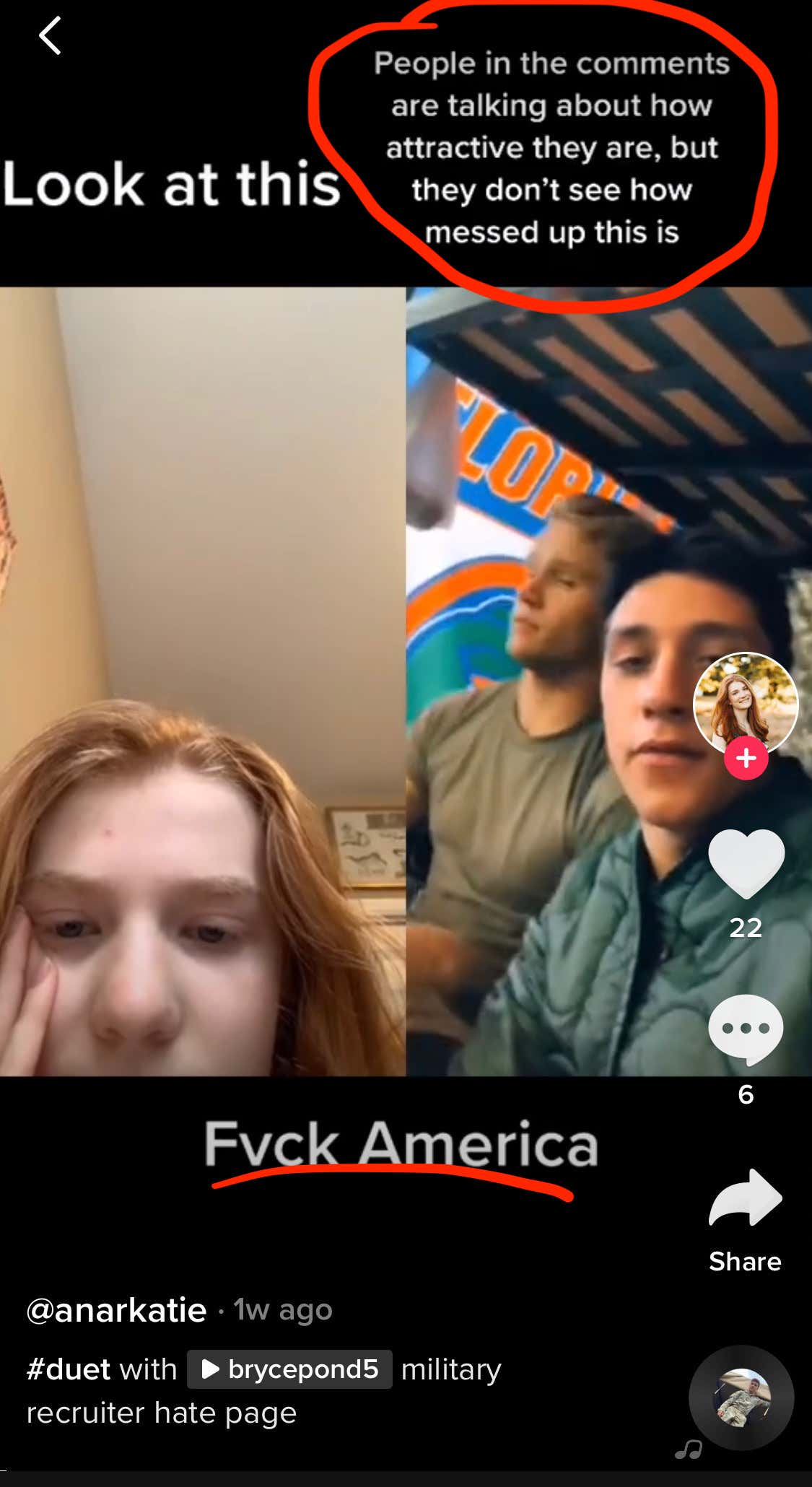 Spooky Alex's narrative annoyed me, even more-so seeing all the responses from people saying 'right on, absolutely, those poor exploited youths'. It's folks who might mean well but have no idea what they're talking about (and no sense of humor, at least in this regard) * pandering to their audience for automatic, thoughtless 'likes' & affirmations (* only I'm allowed to do this), courtesy of young, bored soldiers dickin' around on TikTok. It's not that serious, pal.

It also bugged me that he brought the '22 a day' narrative into it to guilt anyone trying to argue otherwise. (It's a complex issue that gets tossed around a lot, which we covered on a recent ep of ZBT that you can listen to HERE.)

And yeah. Recruiting is essentially a sales job. They're trying to sell you on spending the next 4+ years of your life serving the country in some capacity, and they do indeed have a quota to hit so - for sure - they put a rosy spin on things… but assuming the soldiers in this video are naive, little dum-dums who didn't know any better & got 'trapped' by the evils of the mil industrial complex is an insult to 'em. Some recruiters/recruiting practices might be a lil' slippery, but we've all got Google & the means to get the real skinny on things before we make decisions.

And as for his claim of the 'poverty draft', it's actually a bit skewed & opposite due to other not-great social issues.

I served with people from all sorts of backgrounds & financial means who joined for all sorts of reasons, and on any given day you could find any of us saying, "I fucking haaaaaate this". But uh - it's the MILITARY. We didn't really expect it to be a walk in the park and the low moments where jokes get us through doesn't encompass the big picture of what we ultimately get out of it. Looking back, some of the shittiest times wound up being some of the ones I remember best. Think they put it pretty well in this one… For many, "It's the worst-best job you'll ever have."

In closing, I can still see his higher-ups shitting all over him for this account sometime in the near future. Godspeed!

For more military news/commentary kept light check out @ZeroBlog30 on Twitter, Instagram & on the podcast. New episodes are out every Tuesday & Friday. We also have gear to help you embrace that suck I was talking about.