Well god damn. Apparently Ben Mintz, the Mississippi kid that Dave hired to spite Brandon Walker, is the poker king of the south. From his Hendon Mob page, it looks like he jumps from Biloxi to Bossier City, Chocktaw to Tunica, taking down poker tournaments everywhere he goes. He has solid results from the last decade+, with his first live cash way back in 2007 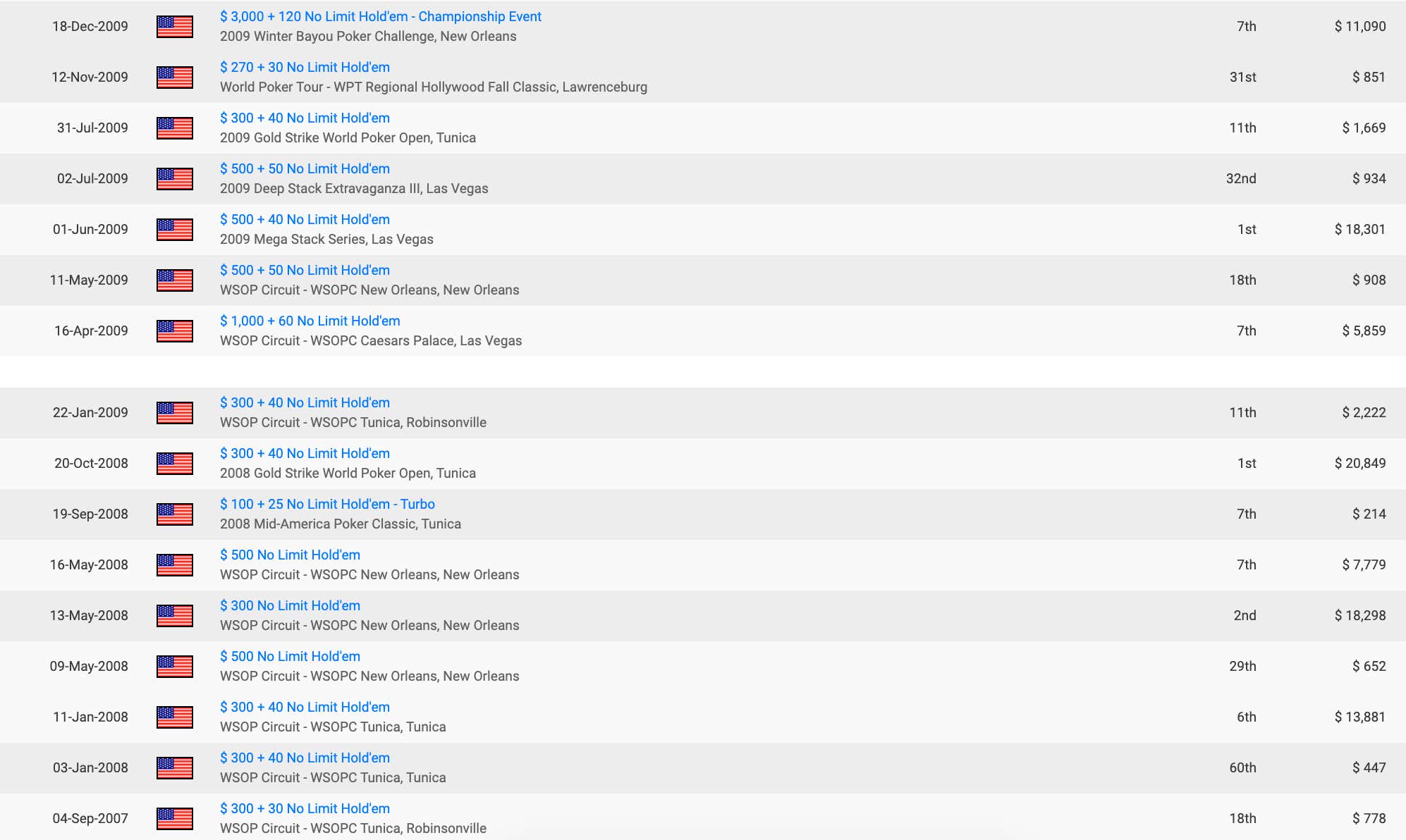 Hey, that's the one I had the chip lead in and then punted! I wonder if I played with him??

I was going to blog about poker today anyway and my original title was "It Is So Fucking Hard To Win A Poker Tournament". I've been…get this…working on my poker game recently, and GASP, seeing results. Over the last week I've gotten a 2nd and 3rd in the $55/$70k GTD, and 10th in a $80/$50k GTD (on an unnamed site), along with other various cashes and close calls.

In this context, it's hard to care about $661. I donate that back in a second. But at least you can cash out some of that $9k for first and buy yourself a nice steak dinner and a trip to Costa Rica.

But even the difference between 2nd and 1st stings.

What I'm terrible at is bankroll management. I see a $215 in the lobby nearing the end of late reg and I start BLASTING. I should not be playing 3 bullets of a $215 tournament. Not in this economy! If I could settle down and not blast off buy-ins with reckless abandon, I might be able to start making money at this game. Possibly.

I'll tell you what though, getting these results makes me feel like I can win in any tournament I play. It's no longer "can I cash in this", it's "I think I'm good enough to win this". But stupid shit will always happen. Last night I bubbled the $88 getting it in set under set with 6s on a Q6T board (he flatted my open with QQ and flopped his dream flop, nicely done). I busted the $109 in similar fashion. But you know, I was on the other side of bad beats and coolers like those in the things I ran deep in, so it all balances out.

Right before the 'Rona hit, we were about 4 days away from filming a pilot episode of a Barstool Poker Night. 6 handed Sit n Go with Barstool personalities, hole card cameras, the whole bit. With Ben coming to town, he will hopefully be a big help in that, whether playing or announcing or both. I think we can make a really cool show. Shit, maybe General Smitty will be involved too. Maybe he's the end boss, the winner of the Sit N Go can go double or nothing heads up vs General Smitty. I love that.

And guess what? Ben will be on next week's episode of Cracking Aces (before he straight up just takes my job). We'll talk his sick results, coming to Barstool, how he learned the game, if he still plays, and everything else. Make sure to subscribe and listen to all 81 episodes, including yesterday's where we break down the Doug Polk vs Daniel Negreanu feud and heads up match.