CORRECT! RnR 12 will be fucking awesome, GUARANTEED. And not just because of our multiple main events, 1st ever live vote for the ring girl contest, or 100% of our announce team returning... But the best part is now there's a FREE chance for everyone to get rich just from watching the RED vs BLUE PPV.

All you have to do is answer the questions for our last 5 fights of the night on the Play Barstool app and you could walk out of your living room as a $25,000 CHAMPION. At the very least someone is guaranteed to become $1,000 richer so NO reason not to join. If you want the best shot at that jackpot than look no further cause for the next 7 days we're gonna unload every piece of information we have, starting with these TALE OF THE TAPES...

TRAILER PARK vs I EAT ASS 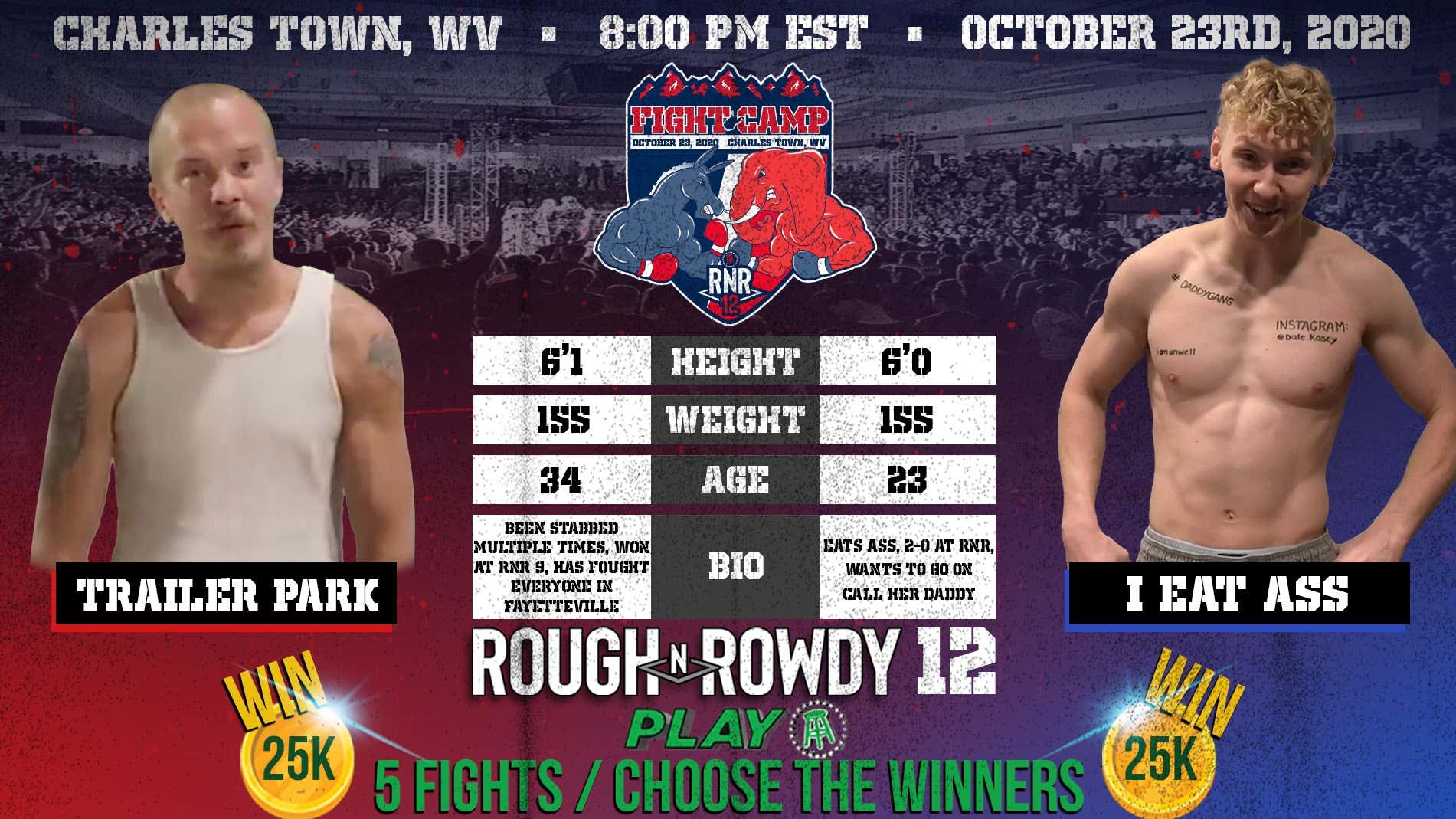 North vs South, City vs Country, Red vs Blue… There's alotta bad blood in this matchup, along with plenty of stab wounds. TRAILER PARK fought in RnR 9, interviewed with Kate, and revealed he's been stabbed more than anyone in the world. Along with fighting EVERY possible person in Fayetteville whether it be locals, military members, or Mr. Lahey himself. This dude is TOUGH.

But when I EAT ASS steps in the ring he's proven to be a formidable force too. He's 2-0 at RnR and a possible #1 contender, but may need more than just 1 clean shot to take TRAILER PARK down.

Prediction: I EAT ASS in 3 rounds by decision 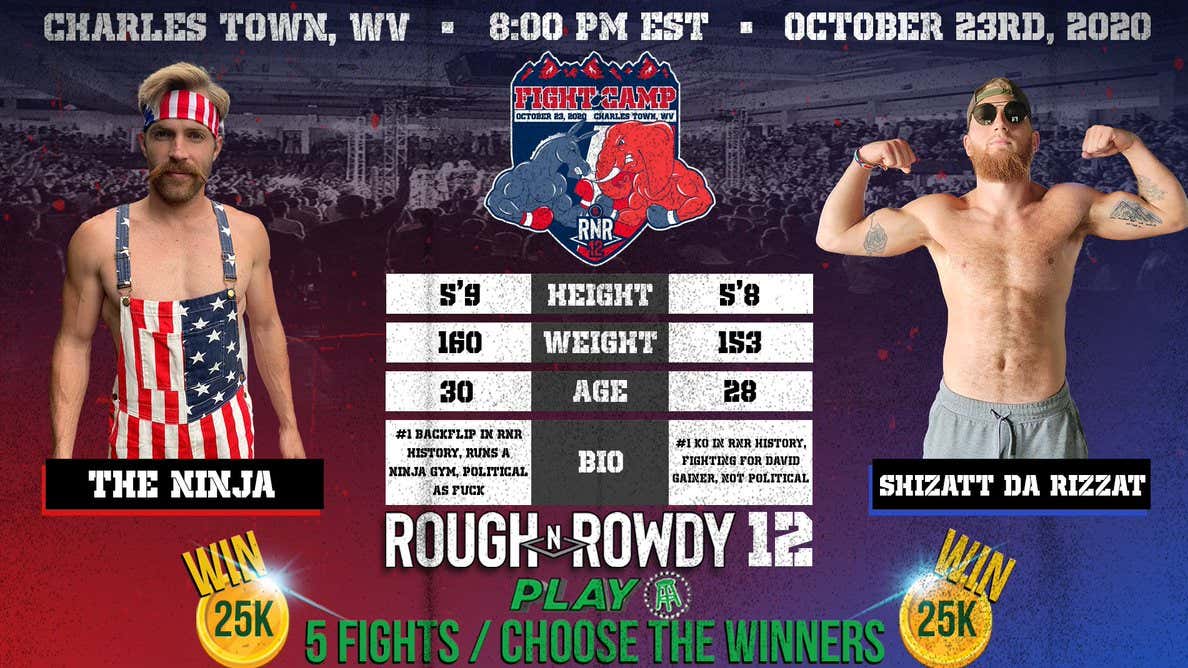 Any true RnR historian will really appreciate this matchup as it includes 2 of the greatest clips we've EVER seen, facing off for the 1st time. THE NINJA has proven himself multiple times in our ring not just with his hands but also his athletic prowess. He's the only fighter to ever pull of a backflip DURING THE MATCH not just at RnR but quite possible world history. He also barely lost to NIGHTY NIGHT in 3 rounds at RnR 9, so he can take a punch.

Speaking of which, SHIZZAT THE RIZZAT landed our greatest punch ever at RnR 2 and has impressed anytime he steps in. Although he isn't undefeated on the scoresheet he's remained confidently humble in every match, and this one means more to him than anyone on the card. He'll be fighting for his fallen friend David Gainer, a fellow RnR legend, so that may make the difference. 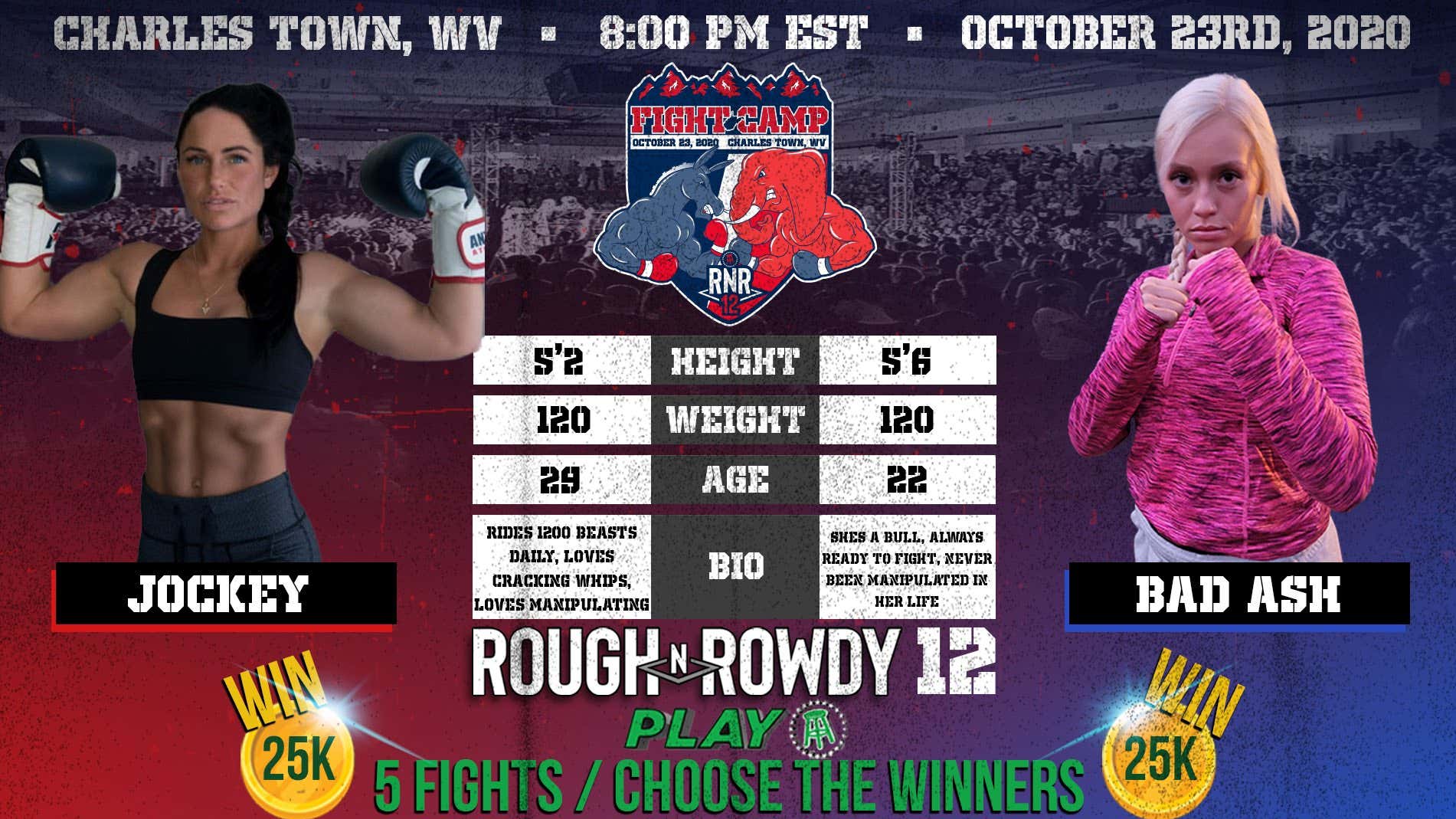 We've never seen JOCKEY GEENA or BAD ASH fight before but this has the makings of an all-time matchup based off their trash talk alone. Every girl on girl fight we've had has ALWAYS delivered in spades and usually our girls are even more aggressive than the guys.

If you wanna argue against that I'd kindly like to send you to SAPPHIRE'S office, tell her RnR sent you…

There could be some surprises here for sure but hard to pick against JOCKEY GEENA since she does handle giant beasts daily AND works out at a ninja warrior gym. But if BAD ASH has truly "never been manipulated once in her life" then she may be the most powerful fighter we've ever seen.

SMIDGE THE DOORMAN vs FLYIN' RYAN 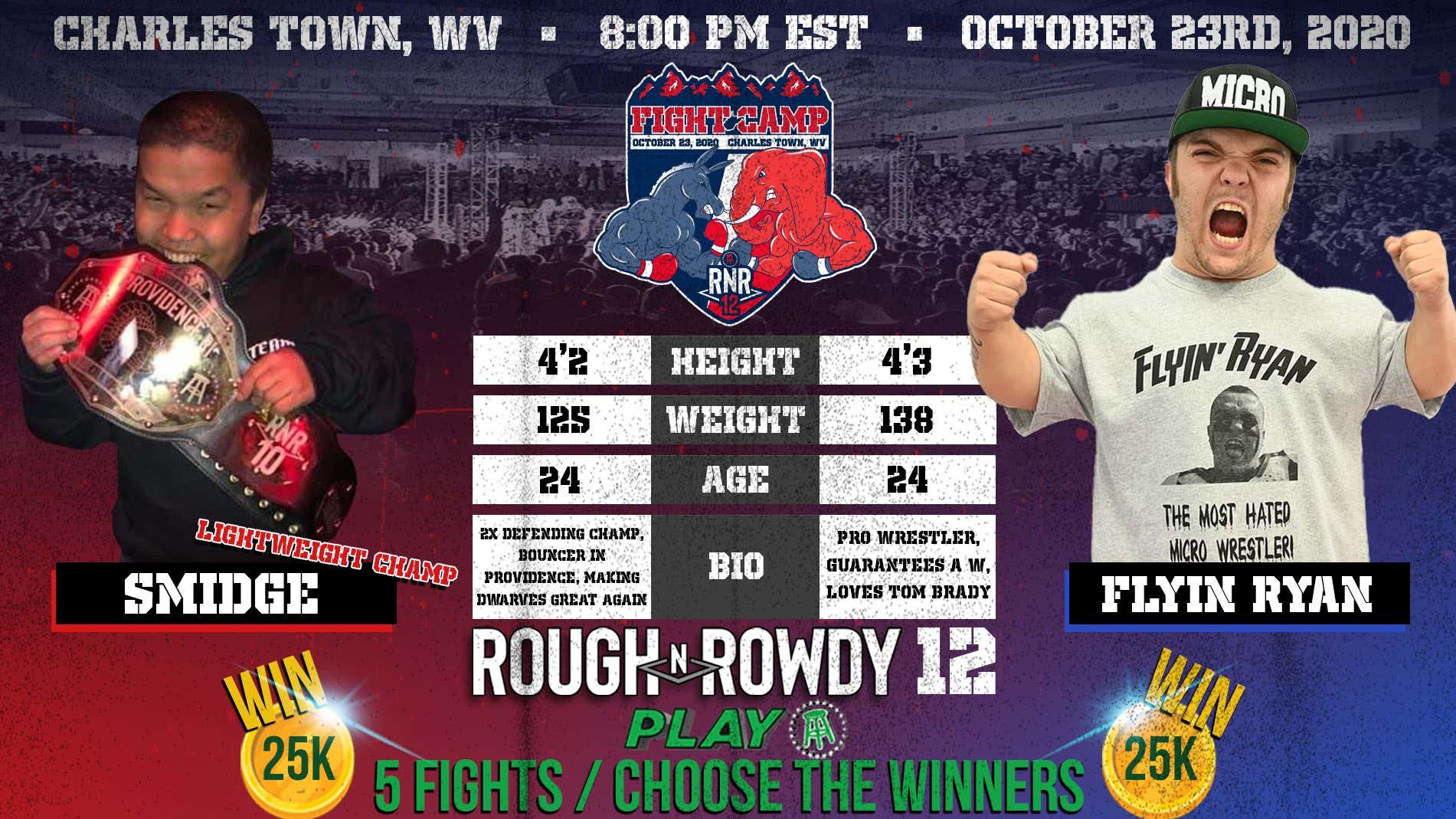 LIGHTWEIGHT TITLE ALERT! And possibly our first true 3-peat in RnR history? SMIDGE THE DOORMAN shocked the world in Providence last fall for his 1st belt and then proved he belonged at RnR 11. He's a former wrestler, current bouncer, and absolutely fearless fighter that will sprint across the ring to beat your ass 1 second after the bell.

On the other side, we have current PRO wrestler FLYIN' RYAN who has talked some A+ shit and clearly won't be scared of the moment on October 23rd. He's also friends with TEO, Smidge's opponent at RnR 11, so he may have some inside insight for an advantage. Guaranteed to be 1 of our best fights of the night.

Prediction: SMIDGE in 3 rounds by KO

LIGHTS OUT vs NIGHTY NIGHT 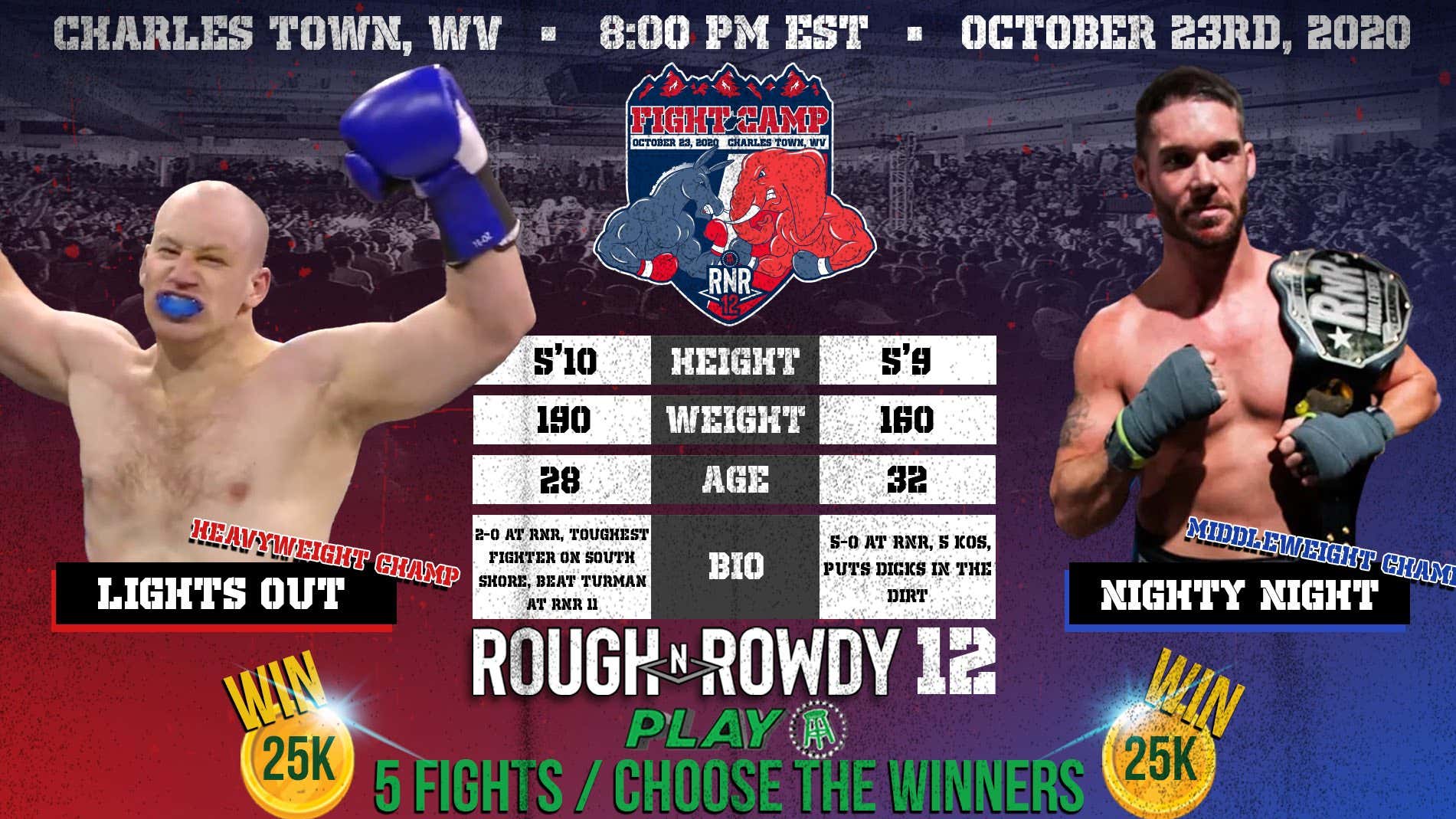 PUT THE KIDS TO BED BEFORE THIS ONE FOLKS! Truly gonna be the defintion of a slobberknocker and a match that could end up as the greatest in RnR Heavyweight history. LIGHTS OUT is 2-0 with some of the heaviest hands we've ever seen, beating the absolute piss out of Travis "JEANS" Turman at RnR 11 and ready for a long title run. He claims to be "the toughest fighter on the entire South Shore of Massachusetts" and we've seen nothing to think otherwise.

But on the other side we have the fiercest striker and most no nonsense fighter we've fucking seen. NIGHTY NIGHT isn't just a 5-0 Middleweight champion with 5 KOs, he's such a psychopath he was willing to move up 20+ lbs just for a shot at this match. 1st time ever we'll have 2 current champions facing off to decide WHO IS THE TOUGHEST MAN IN AMERICA? Can an Army vet who's made a living off putting "dicks in the dirt" add to the trophy case? We'll find out Friday bitch.

Head to PlayBarstool.com now to make your picks and the tune into BuyRnR.com at 8 pm on 10/23 for every fight, ring girl dance, Dave Portnoy + Dan Katz commentary AND MORE 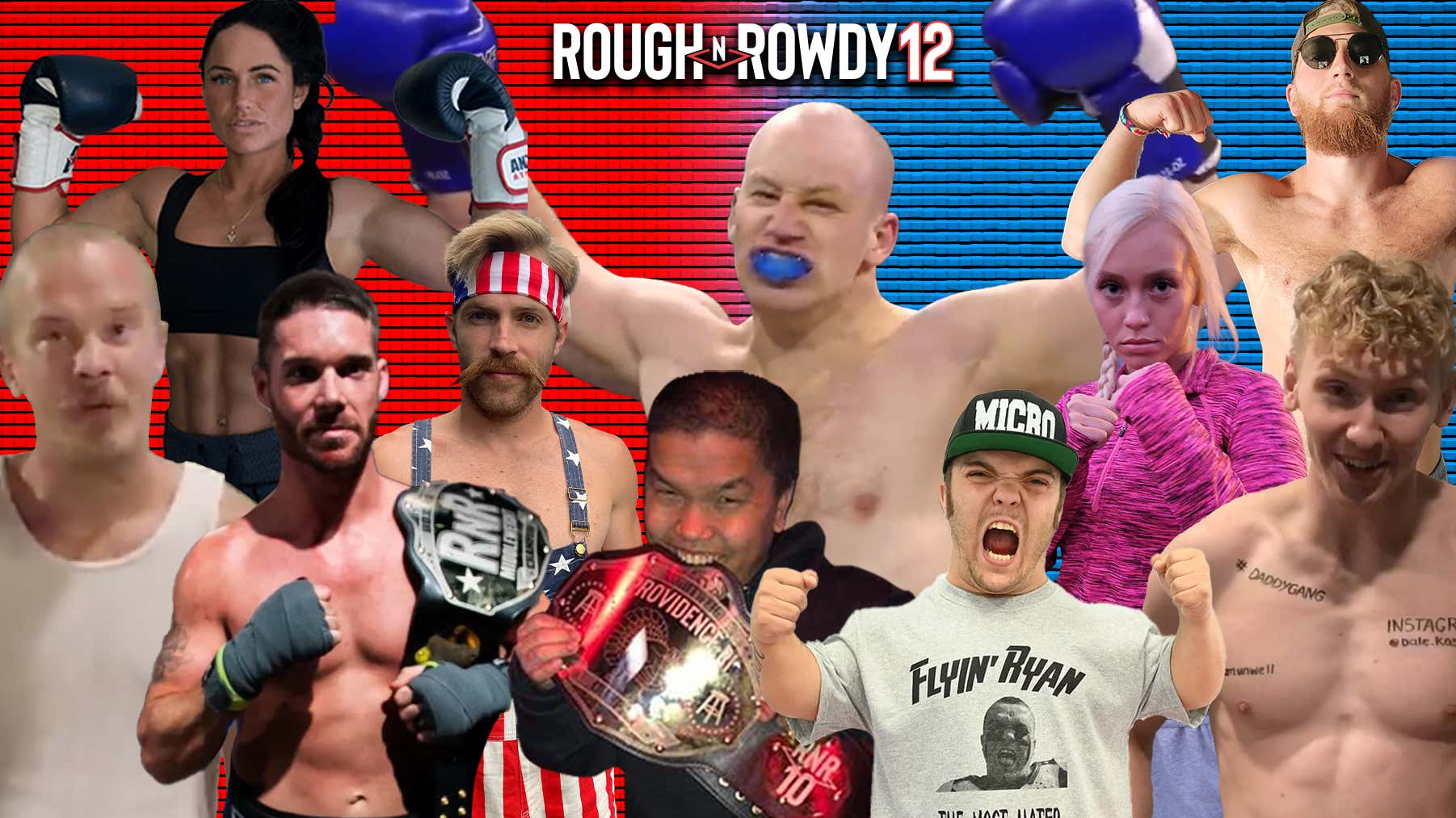