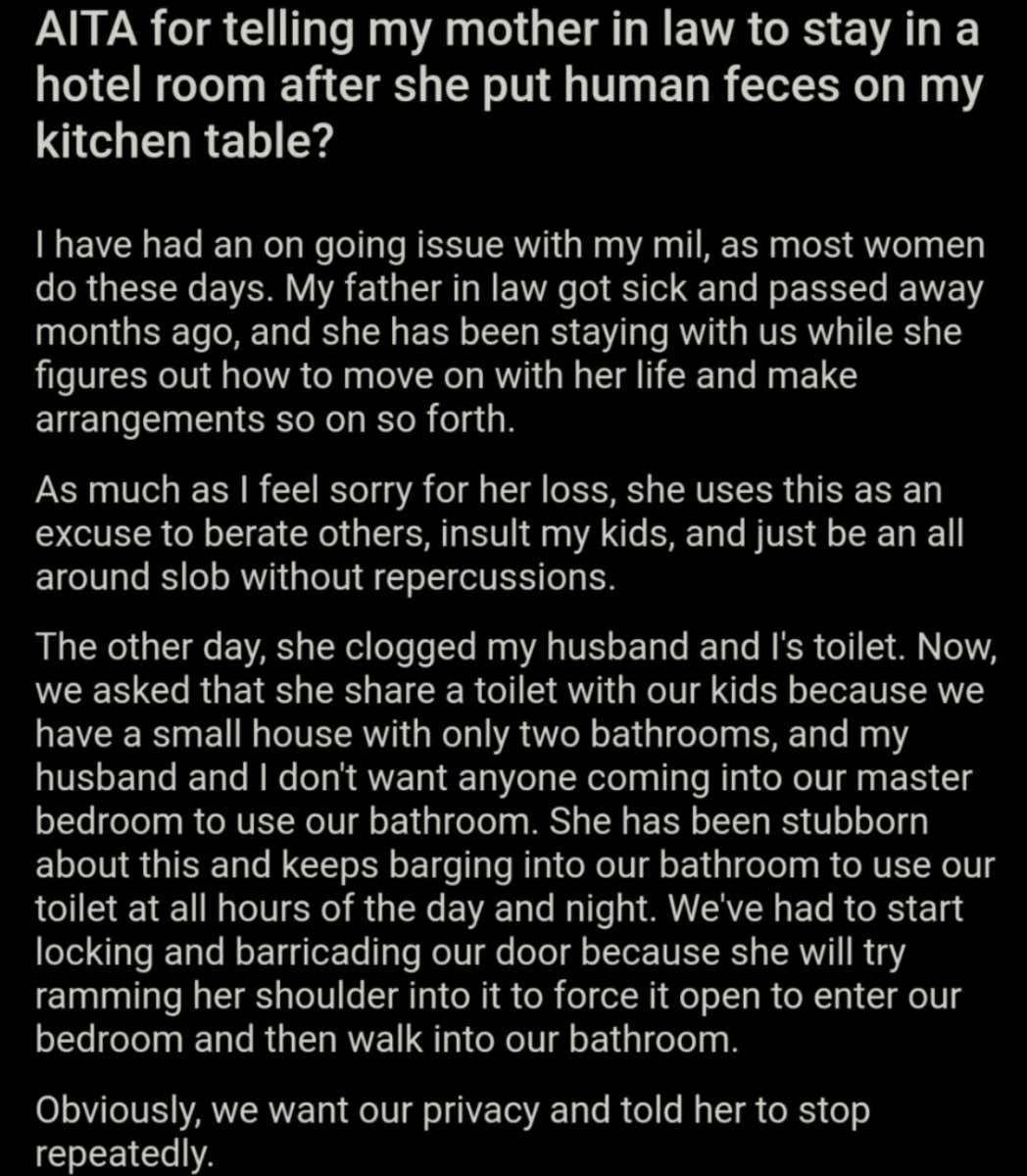 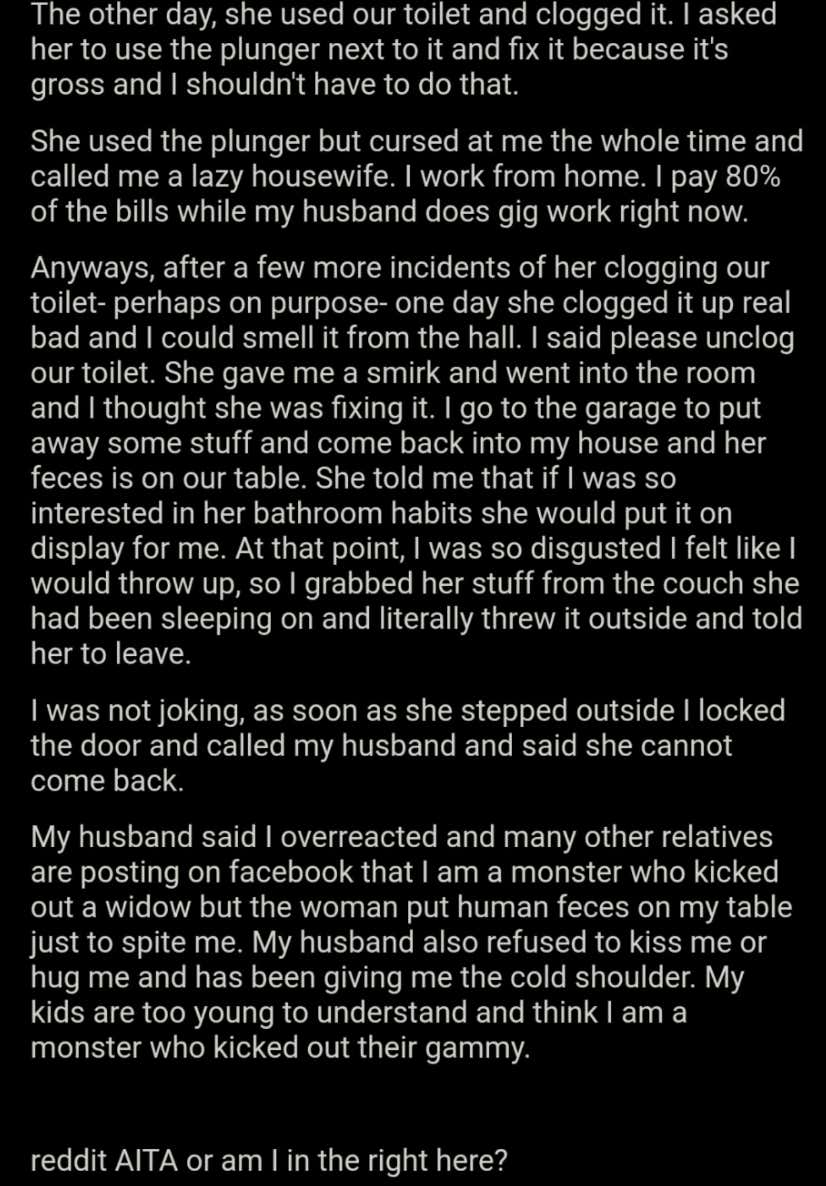 We did this AITA on KFC Radio yesterday (great episode with some wild Mark Cuban stories partying in Russia and getting chased by the Russian mob, listen here) and it's one of the more stunning Am I The Assholes ever. You see, a lot of the time I feel like these are just people looking to tell a good story in which they know they're clearly not in the wrong. I thought this was such a story. Are you the asshole because your mother in law put fucking shit on the kitchen table and you kicked her out? Uhhhh, no. A thousand times no. Obviously no. But then I got to the end where this chick's husband is mad at her and family members are taking to Facebook to bash her and I realized, that's why "am I the asshole" exists. For people forced to live in a world so separate from reality to be grounded a bit.

But if this lady needs it to be spelled out why it's perfectly acceptable to kick out your mother in law, let's do it:

1. "she uses this as an excuse to berate others, insult my kids, and be an all around slob" - this is, again obviously, unacceptable. You come into my house and insult my non-existent kids and you're outta there in 5 seconds flat, nana. Berating others and being a slob is also cause for eviction. I love berating people, I LOVE being a slob (not dirty, that's different. I don't leave dishes in the sink or messes around the main rooms, but my bedroom always looks like the aftermath of a scene in Twister) but when I'm at someone else's place I'm the cleanest person alive. Do crazy things like make my bed and shit, when I leave someone's house there's no doubt that the words I said most often were please and thank you. It's called manners, look it up.

2. "We asked that she share a bathroom with our kids… she's been stubborn about this and keeps barging in to use our bathroom at all hours of the day and night." - UNACCEPTABLE. If you ever, EVER wake a person up to take a shit then you are a fucking monster. You think it's hard to fall back asleep after turning the light on for a piss? Try hitting REM again after your husband's mom fills the room with poop air, I'd be so filled with rage I wouldn't sleep for a week.

When I first lived in New York, some 10+ years ago, I had weird apartment (poor) where the toilet wasn't in the bathroom, it was in a closet in my bedroom. Try and make sense of that if you can. Even in that situation, where it was the only toilet in the house, my roommate knew you couldn't go around barging into a person's room to use the toilet while they slept.

3. "We've even had to start locking and barricading our door because she will try ramming her shoulder into it to force it open to enter our bedroom then walk into our bathroom" - WHAT PLANET AM I ON?! You mother-in-law is KICKING DOWN YOUR DOOR TO TAKE SHITS?! First of all, if she's so fuckin' youthful that she can get through doors that are locked and barricaded then I think she's OK to live on her own. Grandpa died, get over it grandma. You've clearly got a lot of life left to live.

4. "After a few more instances of her clogging the toilet" - Let this be a message to all potential guests at my apartment: you get one toilet clog, after that your shits happen elsewhere. One toilet clog is an accident, or a bad meal, multiple toilet clogs is an attack. A calculated attack. You're making sure you eat a ton of fiber and bread and fruits and bullshit to make sure you've got the hardest, biggest stool possible. You're out back eating bark and roughage to ensure you're dumping just full on paper towels into my toilet. Guess what? YOU'RE OUTTA HERE!

5. "One day she clogged it real bad and I could smell it in the hallway so I asked her unclog it… She gave me a smirk and I thought she was going to fix it… I come back and her feces is on my kitchen table" - Again I am forced to ask WHAT PLANET AM I ON. What kind of ANIMAL would do such a thing? It's insane to imagine that she just barehanded it out of the toilet and plopped wet turds on the table, but that's exactly how I imagine it happened because of everything I know about this woman. She probably squished it down too, to make sure it got in all the grout. And the smirk confirms what I thought in #4 too, that this was a calculated attack and she knew exactly what she was doing. Nana had been waiting for this day for quite some time, and she'd finally dropped the perfect load.

So no, anonymous woman, you are not the asshole for kicking the poop terrorist out of your house. You wouldn't have even been the asshole if you forced her to sit at the kitchen table and eat it with her barehands, Miss Trunchbull and the chocolate cake style.