[This is a journal entry from our #1 investigative reporter Tevo, who spent the last 15+ years following every Rough N' Rowdy tall tale to its alleged source... READ AT YOUR OWN RISK!]

Friday October 23rd we have a matchup that may present us with the two most bodacious babes RnR has ever seen... Jockey Geena vs Bad Ash.

A promo video like that brings us back to the Bra and Panty days of the WWE.  Pure excitement that is sexually charged from a group of bad ass women showing us that they have what it takes to be dominant in the ring.

A treat for all to witness, but we must ask how did they get here?  As an investigative journalist, I wanted to get behind the promo video and into their personal pasts to bring us, THE FANS, to the true nature of these warriors.

Geena has one of the most wild birthing stories I have ever heard of.  Her mother was out tending the stables when her water broke and she knew that she would not have enough time to make it to the local hospital.

The mother laid down in the fresh cut Kentucky Bluegrass and pushed out a beautiful baby girl.

As a young lass Geena could not stay away from the stables herself and at the age of 5 she snuck into the stable at night to ride her first thoroughbred horse.  The horse's name was Empire Maker who would eventually win the 2003 Belmont Stakes and went on to father Pioneer in the Nile which makes Empire Maker the grandpa to Triple Crown Winner American Pharoah.

Her obsession for horses bled into every aspect of her life.  Horse backpacks, bedsheets, toilet paper, and beyond.  She would bring her horse dolls to school and tried to hand out locks of mane hair to the other kids.  Sadly, this got her labeled as "the crazy horse girl" and she was bullied throughout her years at school due to her love of these magnificent animals.

By the time she got to high school she knew the bullying had to stop so she enlisted in boxing 101 at her local branch of Average Joe’s Gymnasium. Her first fight was against Becky “Big Tits” Anderson who was your classic preppy girl that made fun of Geena for liking horses.  Geena gave her the after school special and one punch KO’d her.

The beating was so bad that Becky transferred schools and was never the same.  Years later she has never recovered and has had breast reduction surgery as part is of the process in transitioning to become a male.

Long Story Short Geena is ready for this fight and takes great pride in defending her love for horses.  Her riding crop, aka a whip, is never too far because she is always tamining some type of stallion whether it has 4 legs or 2.  Good Luck Geena and GODSPEED.

What else can we say other than this is one badass chick.  She has the looks and the ability to doll up, but do not look past this girl’s ability to get dirty.  Her father was a 3x “Schlitz Malt Liquor Amature Bull Rider of the Year” so she was always around the local bull riding scene.  She used to shovel bull shit at the events as a teenager for $5 an hour and has ridden a couple bulls herself so I would not question this girl's grit.

If you are an enemy of Ash’s you have to worry about physical domination as well as the mental battle.  My hard hitting journalism led me to Ash’s college years where I heard that there was a rift with a sorority president that would not allow Ash in as a bid to join the sorority.  Ash was heartbroken, but just put an X on Tammy Wilshire’s head and started plotting her revenge.

She found out that Tammy had a long term BF from high school and that she was planning on marrying him.  From there in her free time Ash taught herself the adobe suite series and mastered the art of “Deep Fake” editing.  She staged a hollywood-esk makeout scene at the local college bar with a consenting adult who got paid the Hollywood day rate as an extra at $69 for 4 hours.

She then took the footage and deep faked Tammy’s boyfriend into the video.  From there she blasted it out on the internet and the schools gmail account….Ruthless.

Tammy obviously came after Ash but she was ready after years of being in the bull ring and made easy work of Tammy.  She pinned her down and whipped out an electric shaver and gave Tammy the unhinged Britany Spears look.  The mental and physical warfare that Ash can bring is second to none and I can’t wait to see what she brings to RnR.

These two do not like one another and want to prove on October 23rd who the baddest chick at the party is.  Both have great beauty paired with a psychotic “if you ever leave me i'll kill you” vibe which always keeps you interested.  We should be so lucky to see them fight one another, and WE ARE on Friday October 23rd.

Preorder this majesty now on BuyRnR.com to see it all… It's gonna be Rough N' Rowdy HISTORY. 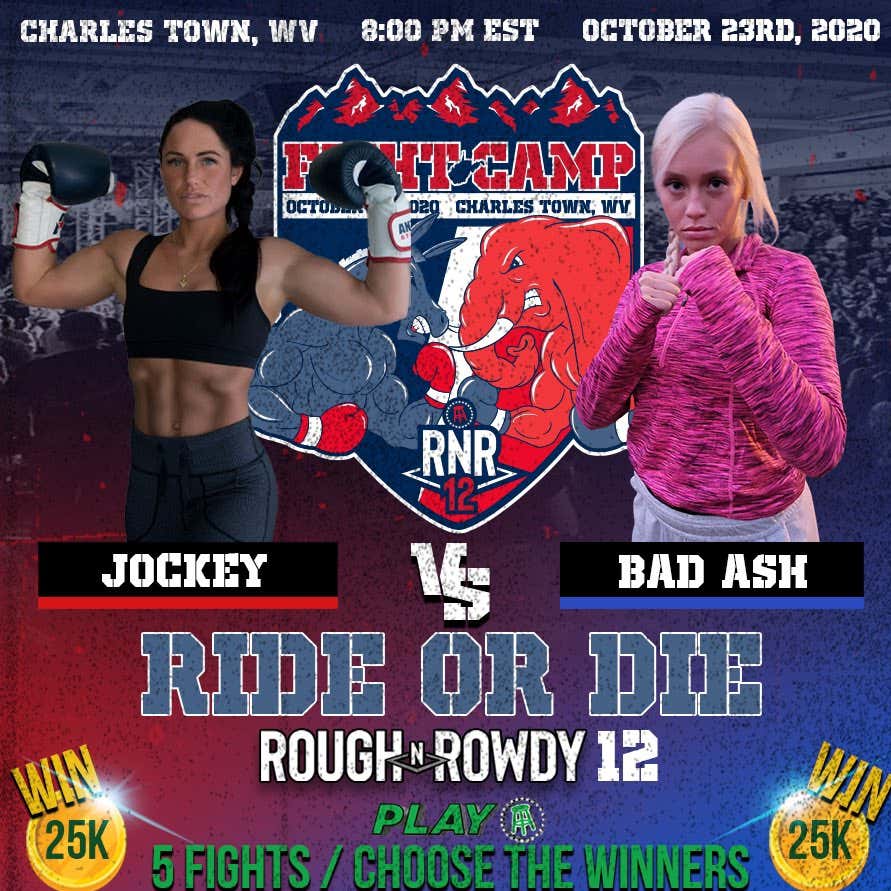