If you're unfamiliar with what "Science Fair" I'm referring to, do yourself a favor, crack open a nice cold one and click on this blog from a couple of weeks ago. Then return here for the very predictable conclusion to that piece.

Eater Chicago - While this weekend will give Chicagoans a dose of pleasant fall weather and brisk patio business, the season’s usual frost and overcast skies pose loom as restaurants continue to tread water during the pandemic. The city in releasing the three winners of its Winter Dining Challenge, hope to ease the burden. The competition sought ideas for safe (and warm) outdoor dining.

The winning ideas are modular cabins with radiant heat, modular blocks with seats and heat, and modified kotasus that serve as heated tables. A panel, which included Rick Bayless, helped select the winners. Each will receive a $5,000 cash prize.

“There’s no question Chicago is a city of innovation,” Bayless writes in a statement. “These designs are encouraging and I have no doubt many restaurants will make them work, but the truth is that our industry needs federal funding help to survive the winter.”

While the country waits federal action, something President Donald Trump has already delayed, local leaders are scrambling. For the next phase of the design challenge, the Illinois Restaurant Association will choose local construction companies to develop prototypes and test them at neighborhood restaurants (also selected by the association) in the next few weeks. Competition parter BMO Harris Bank will cover those costs.

Still, many of the city’s restaurant owners remain skeptical and say they would prefer tax breaks and funding. Keeping a restaurant warm during winter is expensive. Will the city work with utility companies to provide breaks to restaurant owners already struggling with paying their bills? Mirroring their federal counterparts, there was also worry that Chicago program would only benefit larger restaurant groups — owners named Lettuce Entertain You Enterprises, Boka Restaurant Group, and One Off Hospitality Group.

“This is all while actual small business owners are grinding everyday with no relief in sight,” says Zubair Mohajir, chef and owner of Wazwan.

Soraya Rendon, owner of Chilam Balam in Lakeview, says she’s not sure if the contest is a blessing for struggling restaurants: “Maybe at some point the harshness of a Chicago winter cannot be avoided and I worry about workers out in the elements.”

Other restaurant owners worry about change their business strategy. The word “pivot” has become a cliche in recent months as restaurant with a focus on dine in have shifted to carryout and delivery. Asking restaurants to do this again, on top of ensuring they keep customers and staffers safe from COVID-19 is daunting.

Won Kim, chef at Kimski in Bridgeport, says the government needs to do more rather than awarding $5,000 jackpots: “It’s a complicated issue, obviously, but holding a fun contest pitting people against each other again is not the solution,” he says.

I'm really going to try to remain positive while writing this.

I received a bunch of emails from people who submitted entries into the contest after my last blog. And I admittedly felt like kind of a dick. I'll write here what I wrote to them. I genuinely admire their talent and unselfishness. Taking the initiative to help out a cause, and be part of the solution, no matter how ridiculous the root of the issue is, is always honorable. I meant no disrespect to them, their inventions, or their dedicating their time to help others.

The angst and condemnation was directed at the city's officials running this farce.

To reiterate points made in the prior blog, as the city, and Mayor Lightfoot, you're essentially, no, literally, asking and expecting businesses that are already cash strapped and on life support, to borrow or scrape together money they don't have in order to take a shot at surviving via these concoctions you deemed acceptable.

Rather than expand the restrictions you've enacted handcuffing small businesses, mainly restaurants and bars, from operating at more than 40% and no more than 50 people max, you're going to run this contest and encourage places to operate outdoors using makeshift spaces that are, (get this) indoors, in one of the harshest cold weather environment locals in the country.

The definition of illogical.

Want to see what they came up with for solutions?

Of course you do.

But first, a little inside look at just what brainiacs we had running this dog and pony show.

The challenge was first announced in late August, and by mid-September had accumulated more than 640 submissions. The contest attracted a wide range of ideas, ranging from the including converting a CTA train car to a restaurant.

There was serious talk amongst the powers that be about using CTA train cars as makeshift dining carts.

Not only does this totally refute everything the city has said in regards to needing to keep small businesses shut down and restricted because of "confined space" and "transmission", but CTA train cars?!

Are you fucking kidding me Chicago?

We would be safer eating out of a urine trough at Wrigley.

Look at this and try to fathom the thinking behind this idea.

With that out of the way, these are the actual winners. 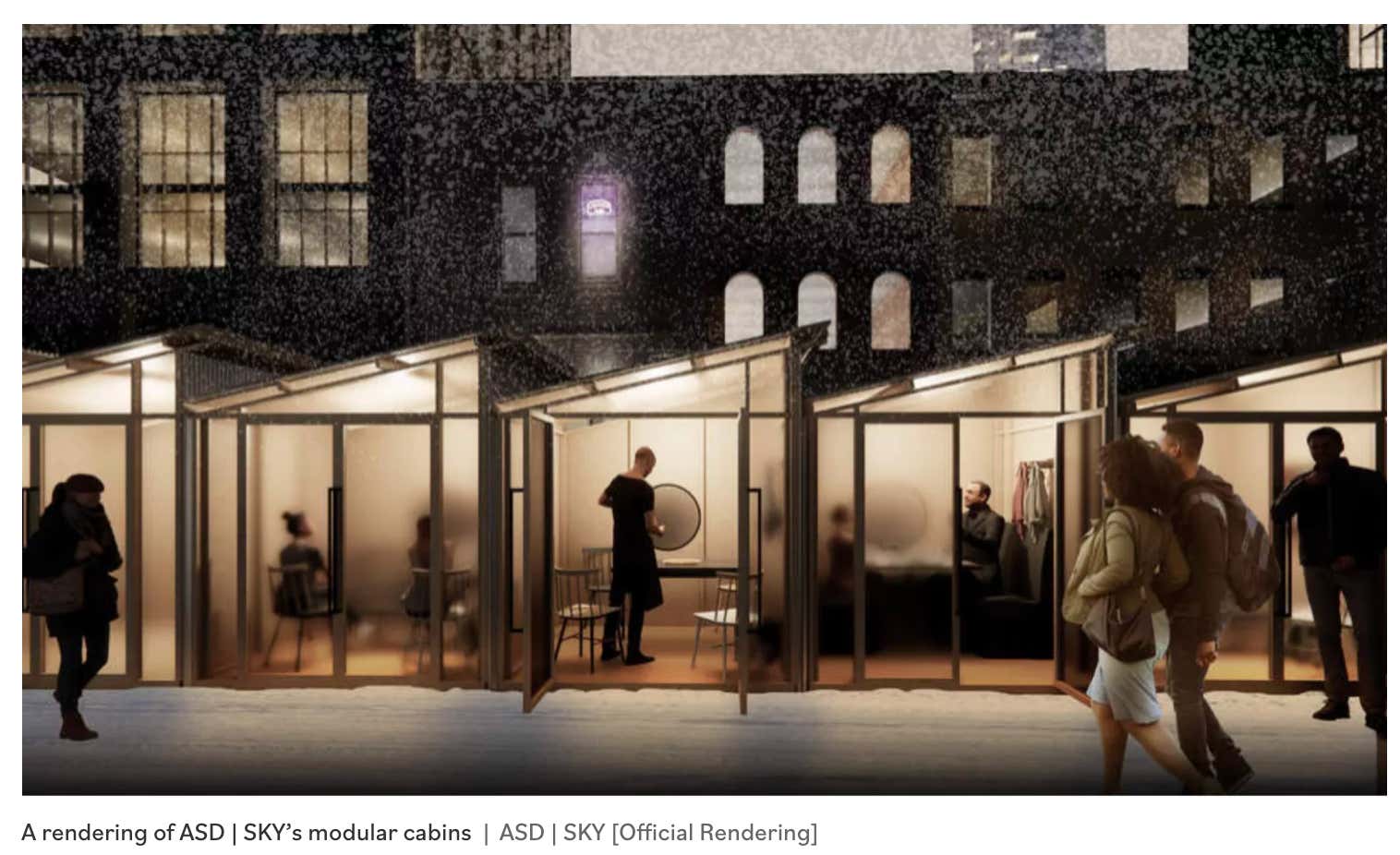 The cabins were proposed by creative design firm ASD | SKY that’s headquartered in Atlanta. It’s inspired by ice fishing huts that fit within the boundaries of a parking space. They’ll include radiant floor heat and are designed to be both low-cost and ADA accessible.

Radiant floor heat, glass or plexi siding and roofs. Look really nice. Good job good effort here. But again, where is the money coming for these? The $500,000 the city has set aside for this will of course go to the big three restaurant groups first and that's peanuts in terms of what materials and labor for these will cost.

And how are these any different from spacing out tables within your space. where you're already paying for heat, and rent, and electricity, and insurance, and water,etc etc etc and putting up partitions between them?

Somebody smarter than me please explain. 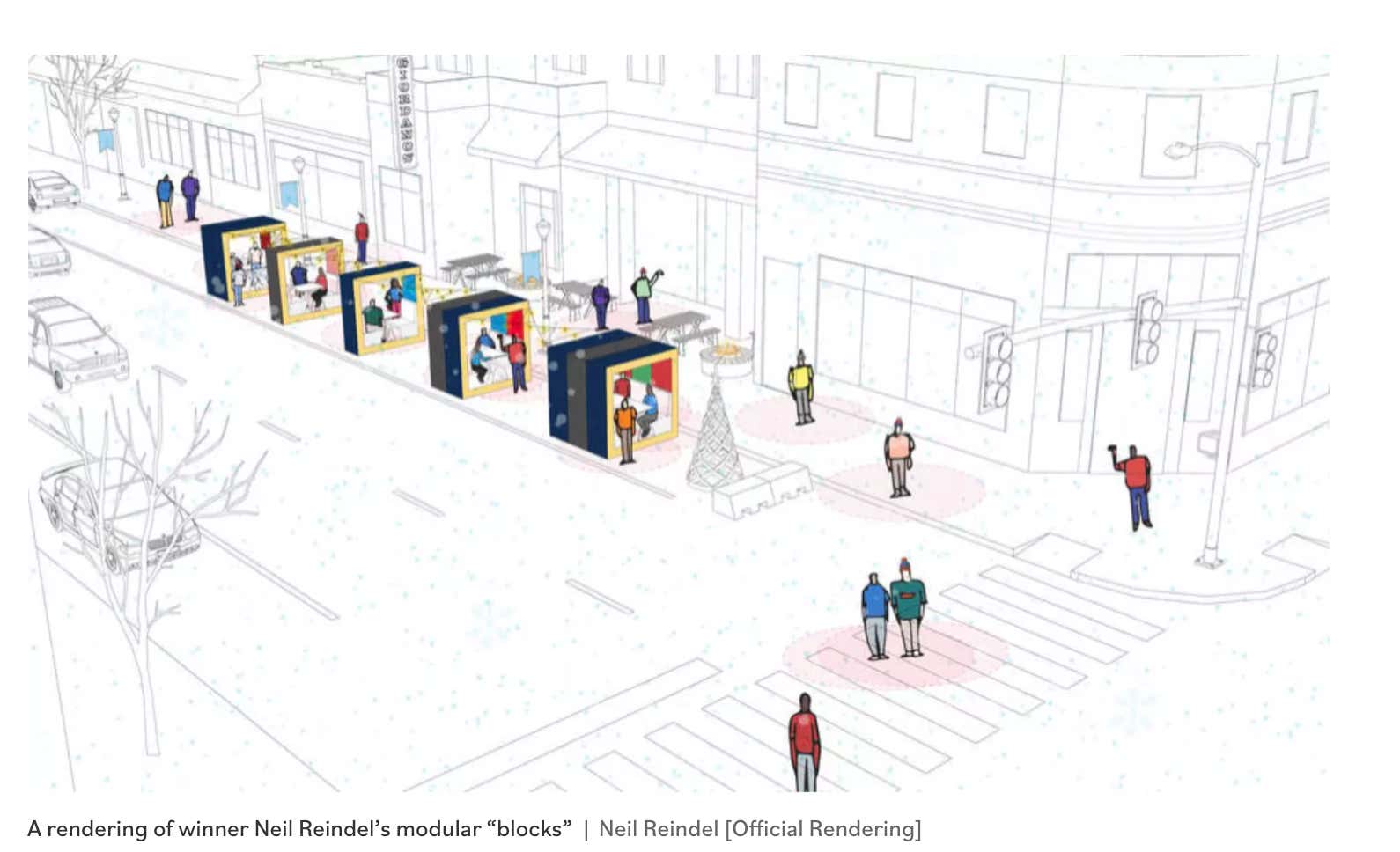 Neil Reindel, a Chicago-based designer who works for Perkins&Will (the firm that renovated Rush University Hospital), proposed his own modular plan: “blocks” that each seat two inside a parking lane. Restaurants could serve larger parties by grouping blocks together. Though they wouldn’t be fully enclosed, the modules should contain a thermal mesh heating system.

See above. Same idea here except you gotta love how the city actually states "Restaurants could serve larger parties by grouping blocks together."

What are we talking about here? Which way is it? 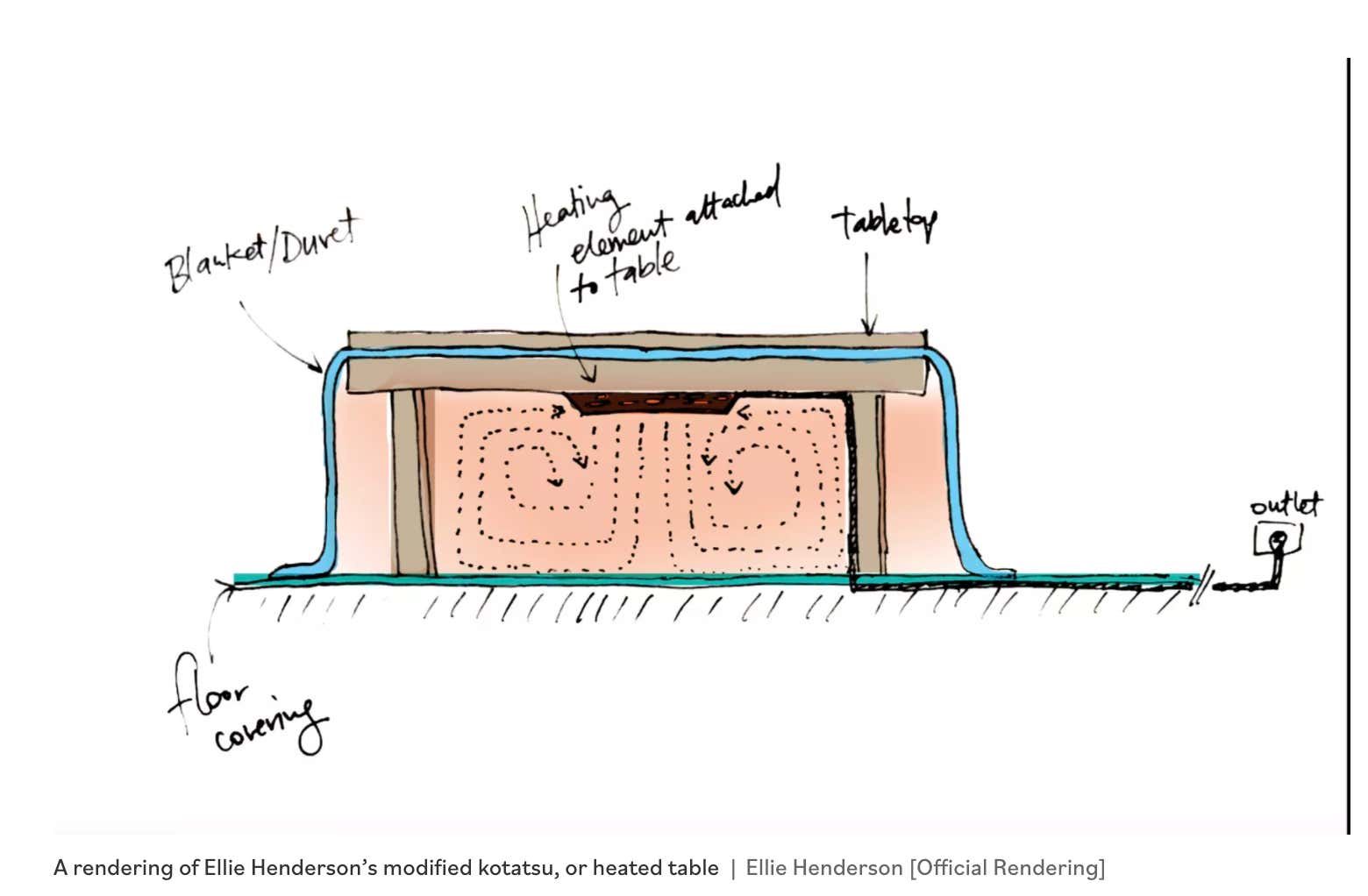 Finally, Ellie Henderson (an art director for Purohit Navigation) submitted plans for heated tables that are essentially kotatsu, or low wooden table frames covered by a heavy blanket on top of a heat source. These are popular Japanese household items that date back to the 14th Century. A local graphic designer, Henderson does note that low tables aren’t accessible for everyone, and that taller tables would be necessary for patrons in wheelchairs.

So you're food won't freeze but you and your date will be looking like Frankie Carbone before your entrees arrive. 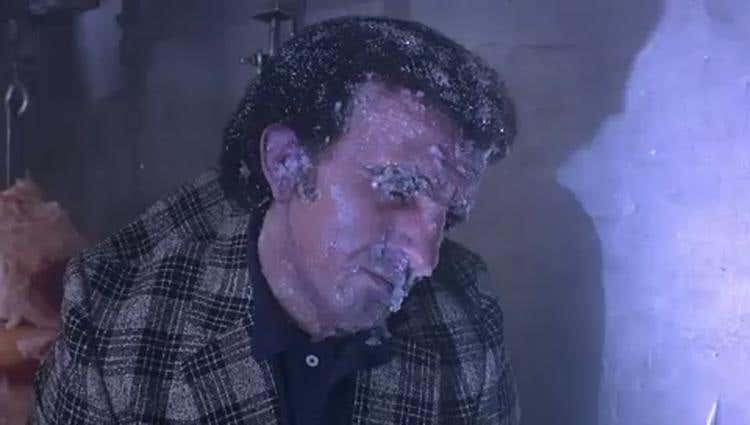 Props to Rick Bayless, (Skip's weaker physiqued, but infinitely more talented brother). As one of the greatest chefs and operators of all time, it was nice of him to admit none of these are realistic solutions for true mom and pop shops and that Federal assistance is the only way places will survive while restrictions against their control are in place.

I'm honestly at a loss for words. I've already bored you with 1200 so won't waste anymore. If you want all my thoughts, again, read the first blog posted at the top of this one.

In closing, cannot encourage everybody enough to support your local businesses. If they mean anything to you, anything at all, if you have a single memory that's important to you from somewhere, if you know a friend that works somewhere, spend your money with them. Winter is coming and it's going to be a deathblow to a lot of places we're all really going to miss. And don't count on our trusted politicians in D.C. getting a deal done in time to help everybody hold on. Playing political football with people's livelihoods is more important to them.