First things first, THIS IS NOT A HATER BLOG. I love Derrick Henry, I love the Tennessee Titans, I love The Boys, I bleed blue and blue. In fact, I'd argue that Derrick Henry not being the monster you imagine him to be, and still doing what he does on the field, is all the more impressive.

How big is Henry? 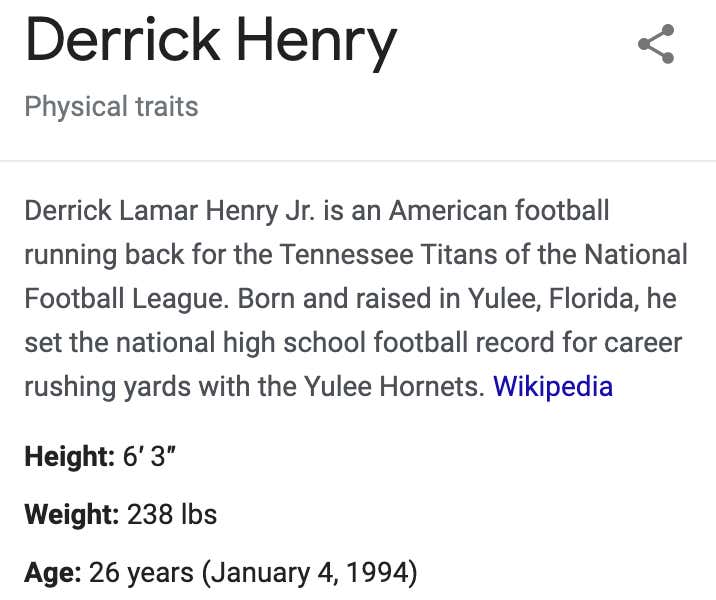 6'3" and 238!!! And that's what he's listed at, so you can prob knock an inch or two and about ten pounds off. If you had asked me before I looked that up I would've guessed Henry was at least 6'6", probably 6'8", and about 350. I thought he was Paul Bunyan mixed with William Wallace, and a giant who shot lightning bolts out of his arse. But nope, he wouldn't even be the biggest guy at Barstool HQ. All the pictures you see of him dwarfing other professional athletes and he's about Big Cat's size.

It doesn't make any sense to me. There are a million viral pictures, you've seen them all from Ingram to Dion Lewis (who is, to be fair, very notably tiny) but the thing is it's not just moments in time and potentially weird angles. On an NFL field Derrick Henry looks like a man amongst boys, he looks like one of those videos you've seen of humongous high schoolers running around with 4 kids on their back. He's bigger than the lineman, the linebackers, the secondary obviously, he looks FAR bigger than everyone.