This article came across my timeline last night, and I was kinda perplexed. Wtf could that little runt Adam Schefter possibly have said or done to piss off Deadspin and the outrage mob? I truly had no idea, but wanted to find out, so I wasted my time and read the article, or at least the first few sentences of it.

Now, once I saw who the author was that composed it, I knew it was going to be some insincere think piece much adieu about a whole lot of nothing. This is nothing new if you know this author. Usually I can just brush it off, but at the same time, this article sincerely made me mad. Like actually mad mad to the point where I've broken a personal rule multiple times in the last day or so by giving the author the attention the author so desperately craves.

I'm not even going to beat around the bush here - this Schefter tweet is the most harmless, mundane joke in the history of humor. It wasn't even really funny. Just a nice little pun making light of what is the most anticipated election as long as many of us have lived coinciding with the NFL trade deadline. Ha! Nailed it Schefter! Kinda/sorta at least.

I'll give the joke a 6.1. Palatable. Would consume when drunk, but wouldn't go out of my way to consume it sober.

99.99999% of people who follow Schefter saw the tweet and kept scrolling. Perhaps a few audibly chuckled, perhaps most didn't. Not sure. The only thing I'm sure of is that it's a completely harmless attempt at humor and does not embody anything political, social, or racial.

It's a goddamn joke and a pretty un-funny one at that, at least in my opinion.

But don't tell the author that: 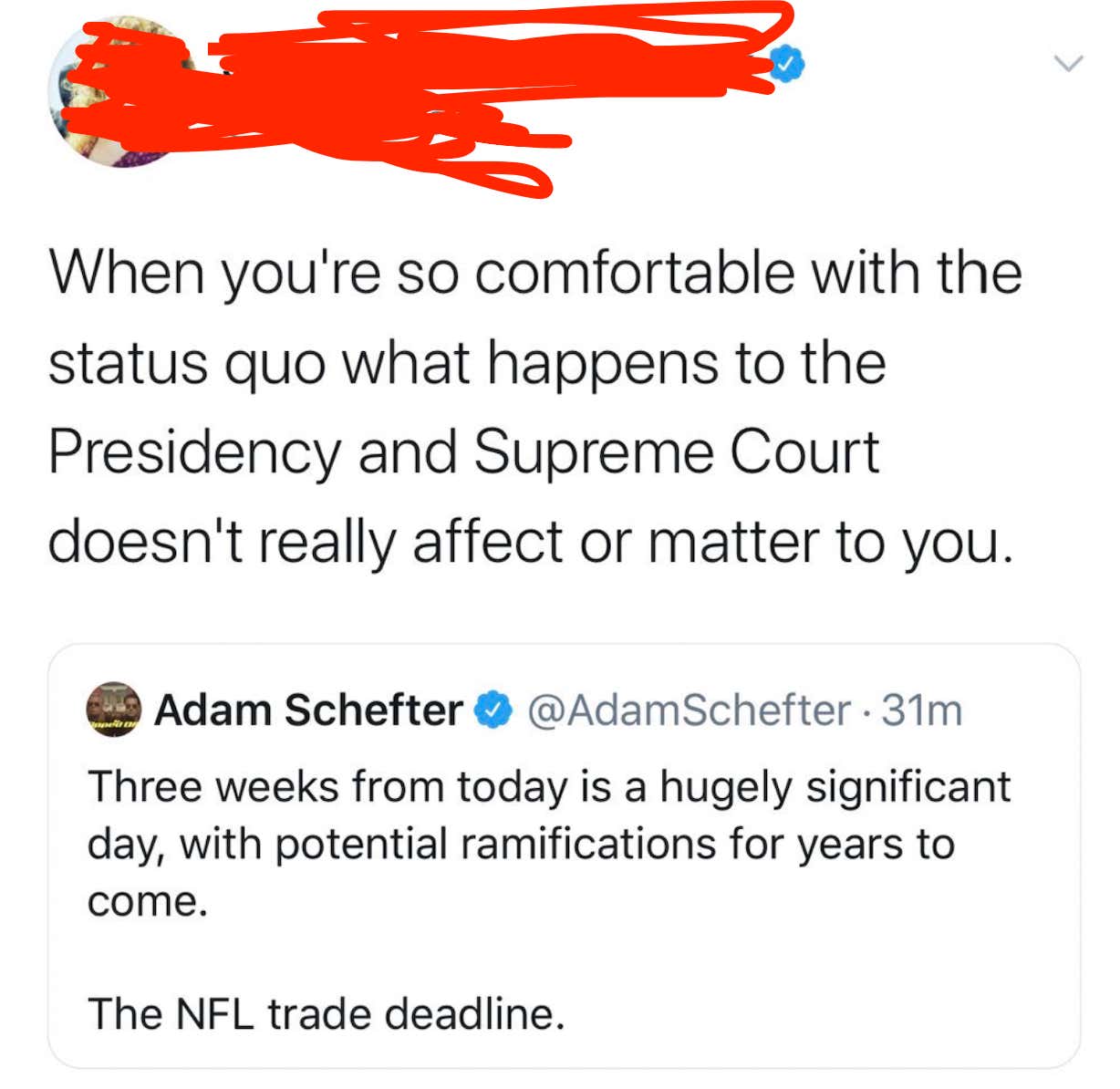 According to the author, it REEKS of white male privilege. DISGUSTING!!! How in the fuck am I going to explain this to my future kids?!?!?! How can Adam Schefter be so obtuse? HOW AM I GOING TO SLEEP AT NIGHT???

Lifts up leg and farts

Real talk though - I shouldn't be surprised considering the source, but I am. The author outdid themselves yet again. None of this is to say that social issues don't exist and we that we don't need reform in many areas as a country and society, but I'm of the opinion that not every single thing on earth needs to be reformed or reflect social change.

I'm also of the opinion that screaming "WHITE MALE PRIVILEGE!!!" every single opportunity you get - like at this really unfunny, yet harmless Schefter joke - that it will probably water down the message in the times it's needed most. It just makes the people that do this come off as insincere and phony to me. To me it seems like people that do this only do so so they can say they are the LOUDEST advocates for social change on Twitter. Again, I'm not saying I'm not a proponent of social change or anything of that ilk, because I am and I want to live in as utopian a society as we possibly can, but again… Schefter made a joke, and a very lighthearted one at that. It was harmless.

It didn't reek of white privilege. I'm sorry, but it just didn't, and unless I'm taking crazy pills, people from both sides of the aisle agree with me. I feel like Bill Burr was speaking DIRECTLY to this author during his SNL monologue from this weekend:

If the author would pick and choose the battles they choose to fight a little better, perhaps they'd have a more compelling argument when they do decide to wage those wars. For instance, take this follow up tweet to the article: 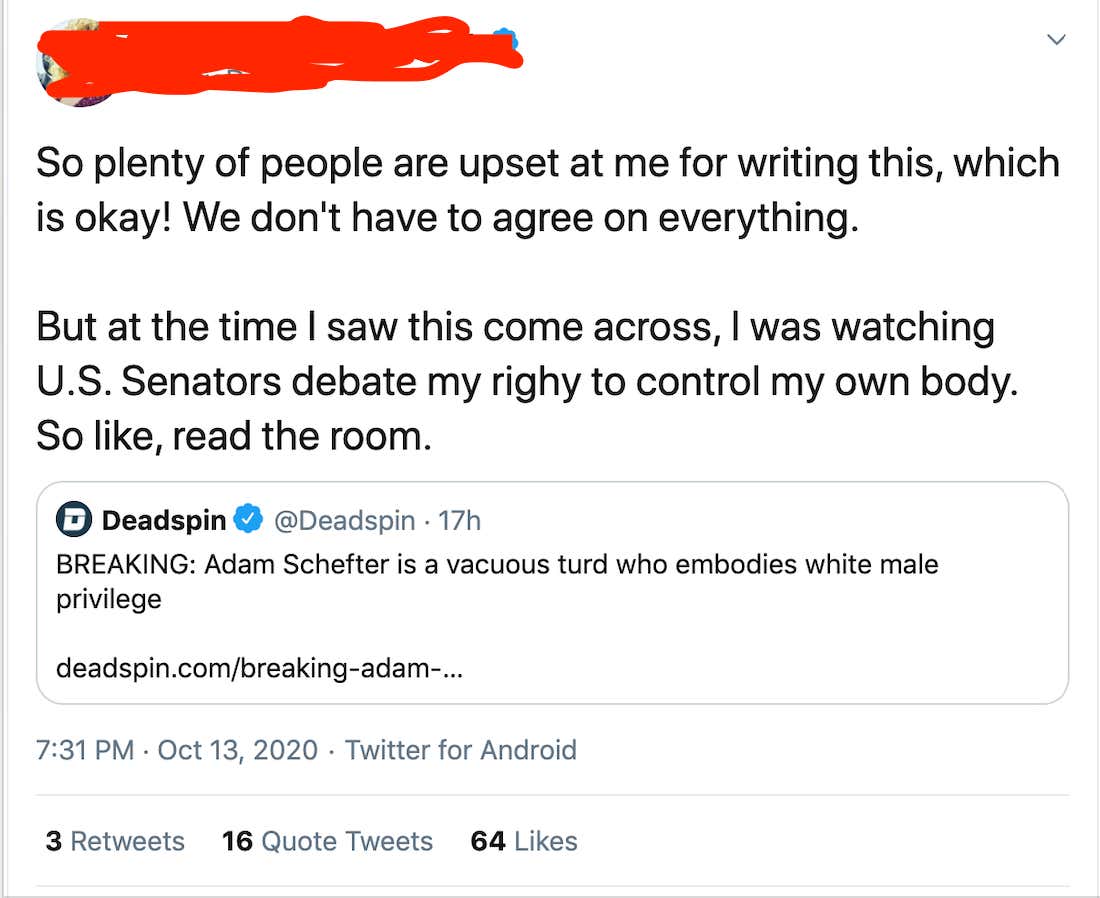 1. I COMPLETELY agree with the first sentence - it's okay to disagree with people, and disagreement SHOULD be a healthy vehicle to advance the change 99% of people want, though having healthy and civil discourse between dissenting opinions waved bye bye to the loud minority on both sides of the aisle a long time ago.
2. I will not comment on the second sentence for what should be a very obvious reason
3. The last sentence is hilariously crazy. "Read the room"…. Ummmm hey (name redacted), Adam Schefter is paid to cover the NFL. He was making a joke about the NFL deadline falling on the same day as the election. He read his room PERFECTLY. He doesn't need to pander to you, the leader of the outrage mob, every time he sends a tweet or makes a joke, because people happened to be watching the confirmation hearing.

For instance, don't read "the bad site" if you're a woman! You don't have the right to choose which content you consume and the companies you support!!! 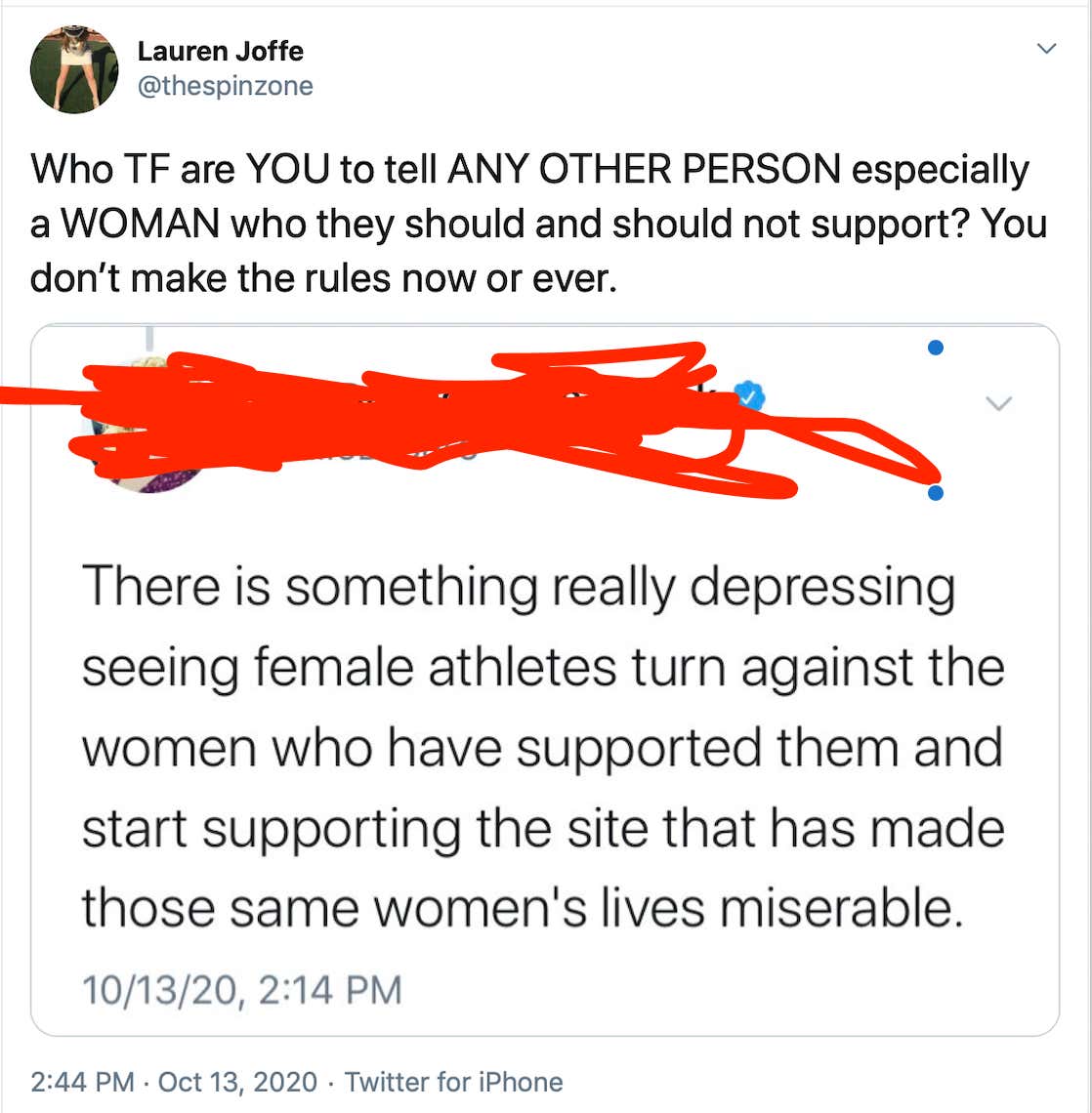 You're not the goddamn empress of women!!! It's so hilariously ironic it makes my head want to explode. This is hopefully the last time I gotta spend any amount of time on this insincere, unauthentic panderer.

PS - you all know who wrote the article. DO NOT SAY ANYTHING TO THE AUTHOR. We have every right to call out the author's insincere, pandering stupidity in the article, but don't flood the author's mentions with anything that will make Barstool look bad. It's what the author wants to happen. If you do that, the author wins, plain and simple. A FUCK TON of people read Barstool - don't be one of the few that gives us a bad rap by opening your mouth or name calling.