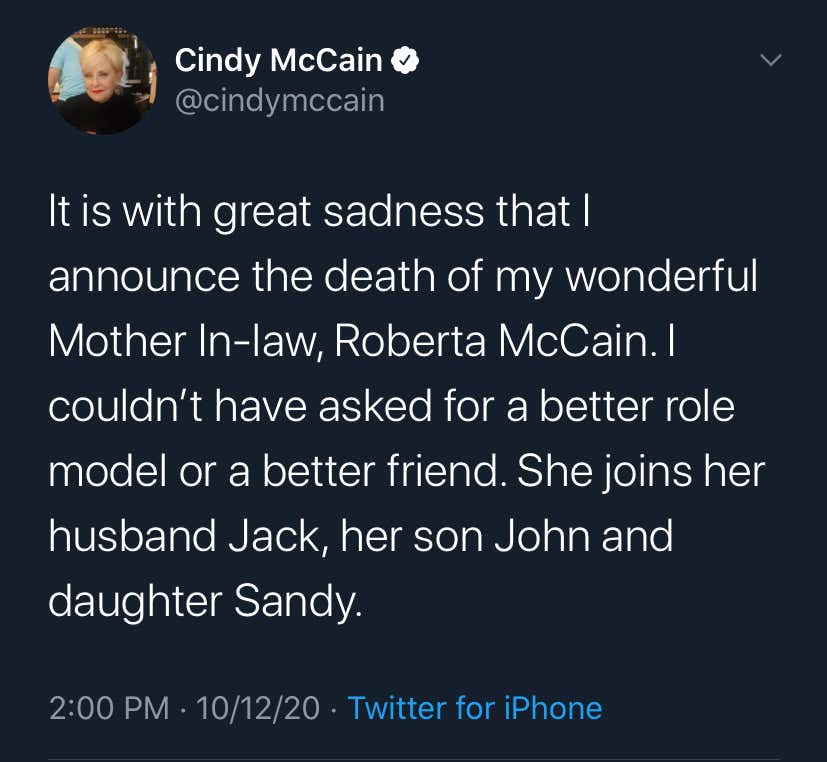 Obviously this is sad for the McCain family. Roberta was married to a military legend and gave birth to another who went on to be a Senator and presidential nominee. Her husband was an Admiral. She’s seen some shit.

That being said, when I saw this tweet from Cindy McCain, my jaw hit the floor. John McCain wasn’t exactly a young whippersnapper when he died a little over a year ago. He died at the age of 82. EIGHTY TWO. That’s pretty old!

His mom just died. She had John when she was 24 years old. She lived to be 108. Can you imagine? You live until you’re 82 years old and you never have to know what losing your mom feels like.

I can’t express just how much I was taken aback by that tweet. Unreal. John McCain’s mom died today. Whew

Here’s a little exert about the kind of mother she was. Safe to say, she probably didn’t put up with any pussy bullshit in her house.

On November 1, 1967, Roberta McCain wrote to President Lyndon B. Johnson, expressing her support of his policies in Vietnam as a "parent of a son who was shot down in Hanoi, last week, and is now a prisoner-of-war..."

In June 1968, Roberta McCain told Parade magazine, "Religion has been of great importance to us in our concern for Johnny, religion and the military tradition of my husband's family. We all pray for the time when we'll see Johnny again."

In 1971, McCain requested no special sympathy in regard to her son's captivity. She stated that Navy tradition was important in the family; her daughter married a naval officer, John S. McCain III became a naval aviator and her youngest son Joe enlisted in the Navy during the Vietnam War. John S. McCain III was held as a prisoner of war in North Vietnam for five-and-a-half years. When notified upon his release on March 15, 1973, that he had shouted expletives at his captors, Roberta McCain's response was, "Johnny, I'm going to come over there and wash your mouth out with soap."