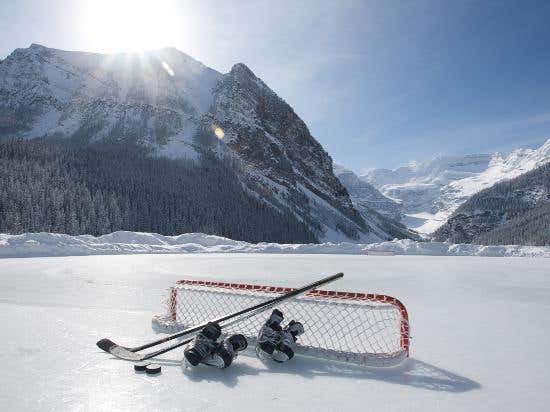 The Star - The NHL has mandated a flat salary cap. But it’s also thinking of mountains.

With the off-season in full swing after the two-day draft and Friday’s opening of free agency, the league is already turning its attention to next season, with a tentative start date of Jan. 1.

According to an industry source who requested anonymity in order to speak freely, Alberta’s Lake Louise — with its famous Rocky Mountain backdrop — has been discussed internally as a possible location for opening day.

Do I want to let an anonymous source get my hopes up only to inevitably get my heart ripped out of my chest in a few weeks when Gary Bettman shoots down this report? Of course not. But am I still going to? Abso-goddamn-lutely.

And not only should the NHL open up the 2021 season on Lake Louise, but they should find 3 separate lakes across North America and have 3 tournaments going on to open up the season. January 1st is a Friday this year. So you've got 10 teams at each pond (obviously 1 would have 11 but I also think we could "accidentally" forget to invite the Florida Panthers and nobody would notice). Then you could have Friday and Saturday being seeding games. Sunday would be the quarterfinals and semifinal games. And then on Monday you could have all 3 of the championship games.

No matter what, every team will have at least 5 or 6 games in the first weekend. Everybody is already resigned to the fact that the 2021 season isn't going to be a normal season, so why not start off with something totally different like a beginning of the season tournament(s)? If the league is hurting financially, just think about how much they'd be able to make off of this. I hate to do Gary Bettman's job for him but I'm left with no other choice here.

And if for some reason Gary hears my idea and decides again it, well then I'm fine with settling for just 1 game on Lake Louise. Because that backdrop is glorious. Imagine the Battle of Alberta being played on that bad boy? Boner alert.