Yesterday Tommy blogged about the Yankees needing to overhaul the franchise. Don't get me wrong, as much as I love reading about how the Yankees have had less success this decade than the Indians, Royals, Rangers and Giants, it got me thinking about the actual Giants. Well, that and a long, long conversation with everyone's favorite human Clem. We're both diehard Giants fans, seen the highest of highs and the lowest of lows. However, of the New York teams and really of teams all in sports, no one needs to overhaul what's going on with the franchise more than the Giants.

The biggest problem with the Giants stems after the last Super Bowl win. They kept thinking their window was still there. They didn't realize how to rebuild while thinking they were in win now mode. Again, since that Super Bowl look at the first round picks. 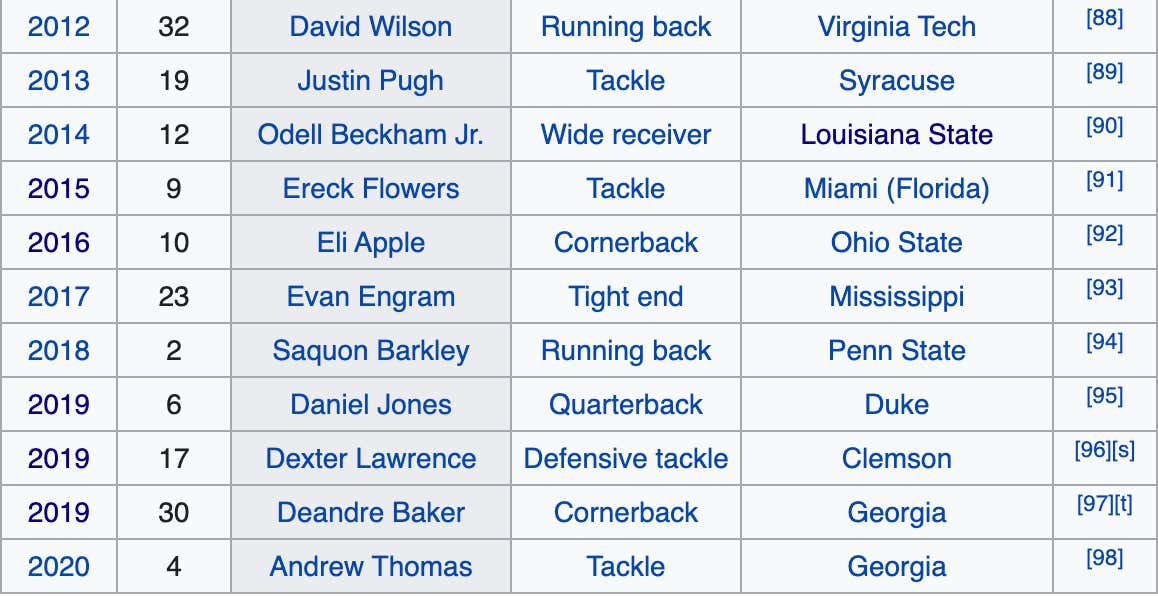 Talk about a disaster. David Wilson never got anything because of a career-ending injury. Justin Pugh was fine, but ultimately left in free agency. Odell was a star, but the Giants never could get through to him and we all know that story. Then comes disaster after disaster. Ereck Flowers is a franchise-changing bad pick. The Giants had Eli Manning, who actually played well enough to help get the Giants to the playoffs. But you know what happened in the playoff game besides the Giants wide receivers dropping every fucking ball thrown to them? Ereck Flowers got his ass kicked. There was pressure at all times. Eli Apple was known more for his mom.

Then the biggest mistake. This is when the Giants decided they were winning now instead of rebuild. THEY DRAFTED A FUCKING RUNNING BACK 2ND OVERALL. Don't get me wrong Saquon is a damn good player. But you don't win with a running back. Not when you have so many fucking holes everywhere else. It's why the Giants have this stat:

So fast forward to today, the Giants are 0-5 and Clem and I are having an hour long gchat about this franchise. First, I don't understand why they didn't move on from Dave Gettleman. I firmly believe if you start with a new coach and QB, you should start with a new GM too. But you have to talk about Gettleman as a whole. His 2018 free agency was a fucking disaster. This past year? Blake Martinez, James Bradberry, Kyler Fackrell have been awesome. The drafting isn't great early, but there have been a couple later picks that work out. At this point he's gotta go though. Start new.

Speaking of that. Let's talk about Danny Jones. I'm not a fan. Hated the pick when it happened. It's well documented on this site and on Twitter. That said, unless the Giants get the No. 1 overall pick, you can't move on from him just yet. He's still on a rookie contract which is arguably the most important thing in the NFL. Build up the line around him, get a true No. 1 wide receiver and give him 3-4 years. UNLESS Trevor Lawrence is there. If that happens, you move on from Danny Jones in a heartbeat and start with Trevor Lawrence.

1. Any decent offensive lineman. Legit, anyone that can block a human

2. A No. 1 wide receiver, preferably that can catch and stay healthy

It starts with John Mara though. He's a mess as owner. Hate every decision he's made. Hiring Pat Shurmur set this team back years. The terrible drafting did the same. This is the franchise that needs absolutely overhauled.