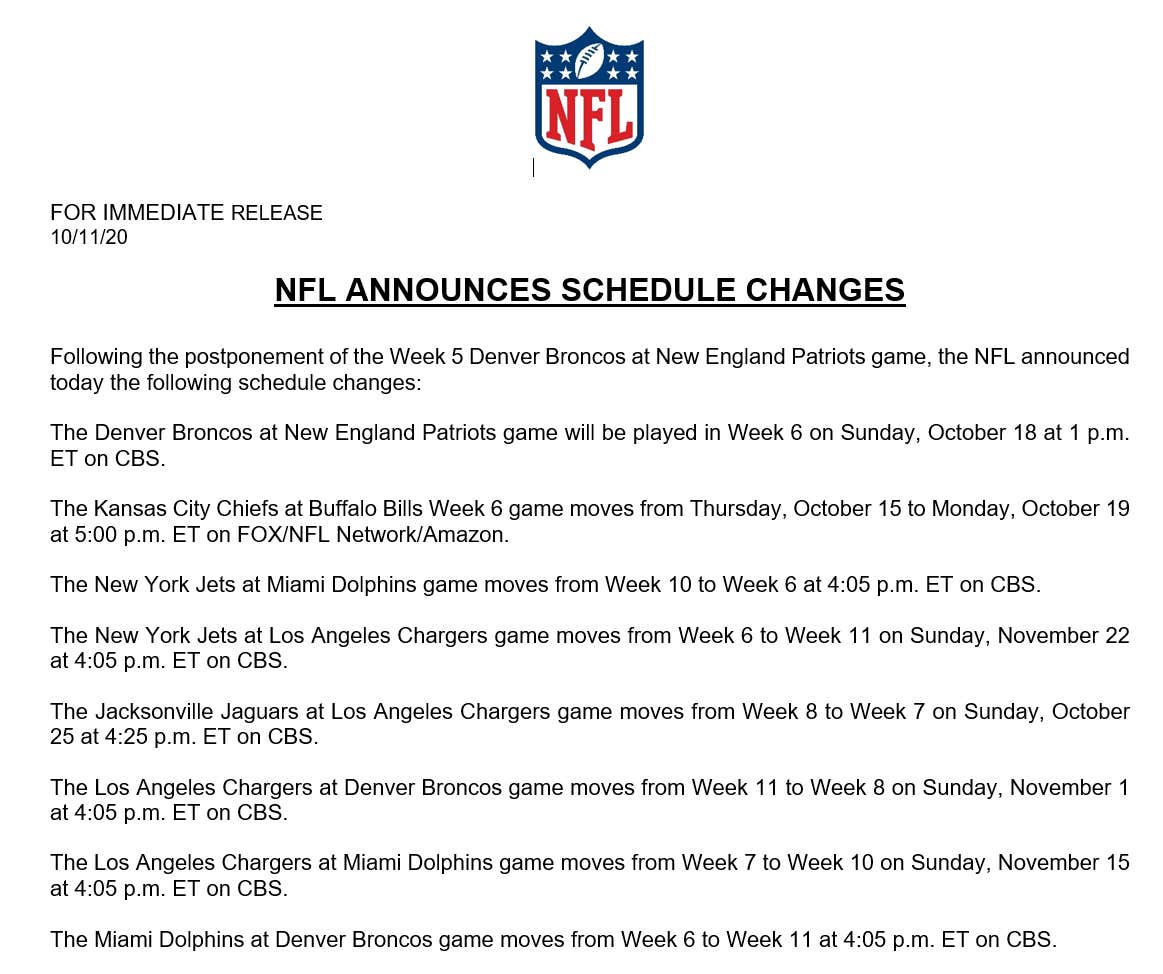 EXCLUSIVE FIRST LOOK at the schedule maker after shifting all those games around:

I imagine this announcement got lost in a bunch of people's Twitter feeds as it came out during the witching hour which causes a bukakke of NFL #content to flood the timeline. So I wanted to bring it back up once we were all done staring at our fantasy teams score points 1/10th of a point at a time since an NFL announcement at 2:47 PM on a Sunday is essentially an 8 PM announcement on a Friday night for most other industries.

I don't know how Roger The Dodger told the nerds in the schedule making department to make the NFL schedule. But I imagine even that clown shoe made sure to ask them to have a bunch of outs in case corona rain train on teams. And in case you haven't noticed, this is a live look at what the coronavirus is doing to Goodell's well-laid plan and well-laid ass.

I said when we had the first Titans positive test that the NFL schedule was like a Jenga tower and shifting things around could cause everything to topple over since you can't schedule 7-inning doubleheaders in a make up on a whim. Well the first few blocks have been moved with more moves potentially to come. And even though the tower isn't shaking, it's not as stable as it was before the weekend started. We aren't in the endgame yet, but we are at least at the point of the season where the schedule makers are computing what else they can do to keep things competitively fair without issuing forfeits as bye weeks start to turn to dust.

I know there are checks in place that allows the playoffs and Super Bowl to be moved back a few weeks if this shit continues to spread. But something tells me things are going to get worse with the virus during the next few months before they get better. So the NFL having to move those first few set of blocks before Columbus Day is a red flag for someone like me that is pretty much solely relying on the NFL season getting me through the last few months of bullshit and surprises that 2020 has planned for us. I won't discuss how moving games to Week 18 will fuck fantasy teams up however because I'm not ready for that thought to enter my head.

Also, if we are being robbed of a potential MVP showdown between Patrick Mahomes and Josh Allen on Thursday night, FX should be forced to move next week's episode of Fargo to Thursday night since it's the best thing on TV that isn't NFL football and it's such bullshit that it airs during a game that I waited all day for.