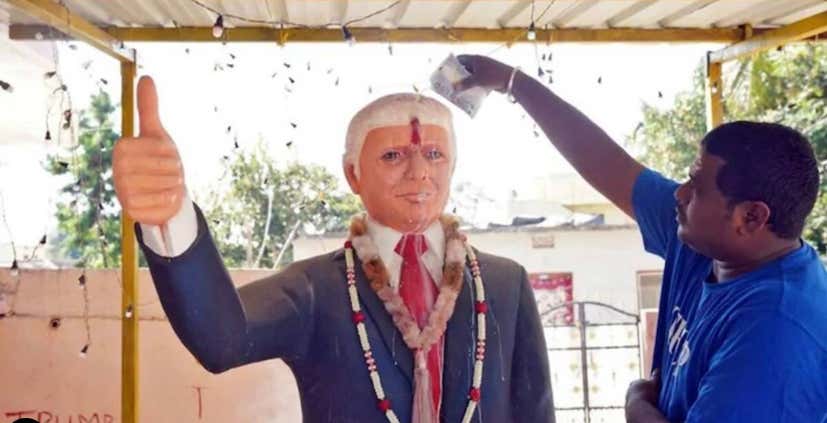 An ardent fan of Donald Trump from Telangana, Bussa Krishna, who worshipped the US president like a God, died of cardiac arrest on Sunday. Krishna, who has been worshipping Trump every day for the last years, was depressed ever since he learnt that the US President and his wife, Melania, contracted Covid-19 recently.

B Vivek, a cousin, told indianexpress.com that Krishna woke up in the morning as usual, had a bath and a cup of tea, and then collapsed on the ground. “He had slipped into depression after hearing about Trump contracting coronavirus. He was not eating properly. When we rushed him to the hospital, the doctors declared him dead. The cause of death is a cardiac arrest,” he said.

He stuck Trump’s photographs across the walls in his home and even started wearing T-shirts imprinted with his idol’s images. Wherever he went, he carried a framed photograph of Trump. Last year, the 33-year-old decided to spend Rs 2 lakh and erected a 6-feet tall statue of Trump at his home. This came to be known as the ‘Trump temple’. It was his wish to meet the US President once when he visited India earlier this year.

Will the pain ever stop? I think the answer is painfully obvious. One minute you’re worshipping Trump and things are going great and then you hear about a helicopter landing on the White House lawn and you get the center of a peach in your belly. Pit in your stomach city. You pray and pray and pray but does god hear your cries when he’s on a respirator and getting pumped full of steroids like he’s Lex Luther via the 1993 Bash at the Beach?

Rip Busha. Half mast is too damn high.