As for the rest of you... I'm not quite sure what to say. Prior to losing to TCU last week thanks to a zillion sloppy mistakes (and this was after nearly losing to Texas Tech because of dumbass special team plays), I can't say I was even slightly excited about this game.

Sure, OU isn't the team they used to be and losing to Kansas State for the second year in a row and Iowa State last week had to be some sort of mental fuck for them, BUT Texas had just lost to the gd Horned Frogs at home - something that had only been done three times since 1967. So suddenly the game of the year didn't really mean shit to a #9 team who has quickly fallen to #22. But whatever, it's the Red River Rivalry - if nothing else, pride always at stake.

The first half of the game lived up to the name, but despite the fact it was tied 17-17 at the half, it felt as though the game wasn't nearly that close thanks to the massive ups and downs. Three back-to-back OU turnovers resulted in 10 points for Texas... but that's kinda where the fun would end for the Longhorns thanks to an atrocious second half.

I'm not sure exactly what happened to Sam Ehlinger in the third quarter, but he disappeared. Completely. Meanwhile, OU scored 14 unanswered points and suddenly, with 5 minutes left in the game, Texas was down 31-17.

Except, because I'm a complete and total moron, HELL NO IT WASN'T OVER! Not with Lincoln Riley out there throwing the ball on 3rd down, giving Texas a little bit of extra time to...

Texas hasn't come back from a 14-point deficit against OU since 1999, and yet here we were - after a thousand terrible mistakes and horrible quarterbacking from Sam Ehlinger who looked completely overwhelmed and dead - also scoring 14-unanswered points and sending this game to OT where Ehlinger…

Look. I'm not saying Sam Ehlinger would be a spectacular NFL QB, but when it comes to college football, THIS is the guy you want under center. I can confidently say since Vince Young no one - and I do mean NO ONE - has been breathed, slept, or lived Texas football more than Sam Ehlinger. I LOVE this kid. So much.

Which is why when Dicker the Kicker's extra point was blocked, I was devastated. Not for me, for my quarterback; the look on his face was absolutely heartbreaking. After that performance, in his last year in burnt orange, Ehlinger deserved that win. Or at the very least, he deserved not to lose it because of a college kicker.

But, uh, yeah, unfortunately, this story ends with an Ehlinger pick.

Really sucks. That was the worst fucking ending to the greatest TX/OU game since forever. Not just because Texas lost, not just because they lost to OU and I fucking hate OU, but because that's not the Red River Shootout/Showdown/Rivarly ending I wanted for Ehlinger. So instead of posting a picture of his sad, post-interception face, I'll end this blog with how Ehlinger deserves to be remembered against OU. 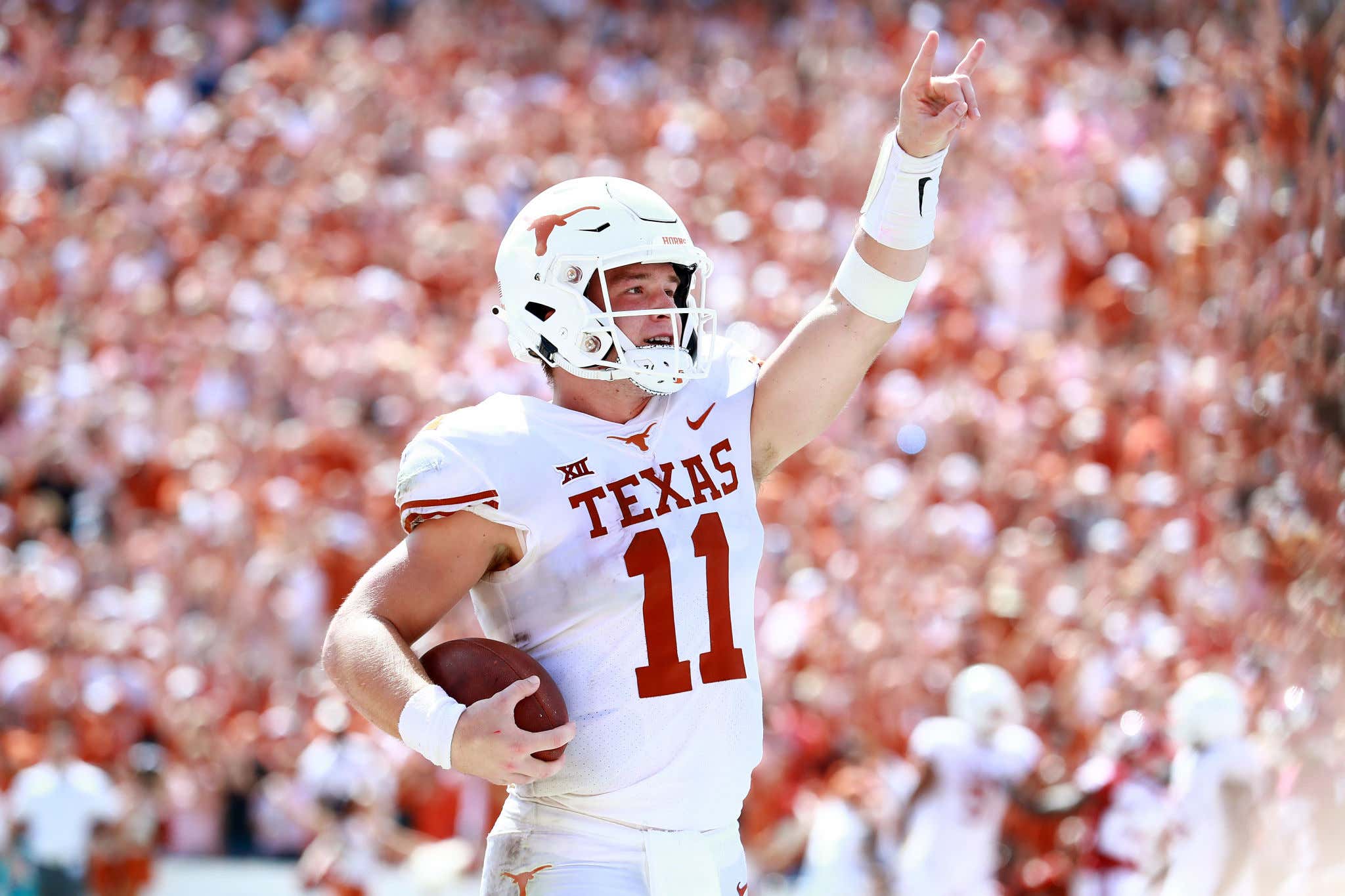