The Torey Krug Era in Boston is officially over as the offensive-minded D-man signed a 7-year/$45.5M deal with the St. Louis Blues. He has a No Trade Clause for the first five and a modified NTC for the final two.

The undrafted free agent out of Michigan State leaving town felt like a foregone conclusion. As for ending up in St. Louis, we can't be surprised by much of anything during this unprecedented period in league history. And Elliotte's second Tweet above confirms what I alluded to in my blog from earlier today... 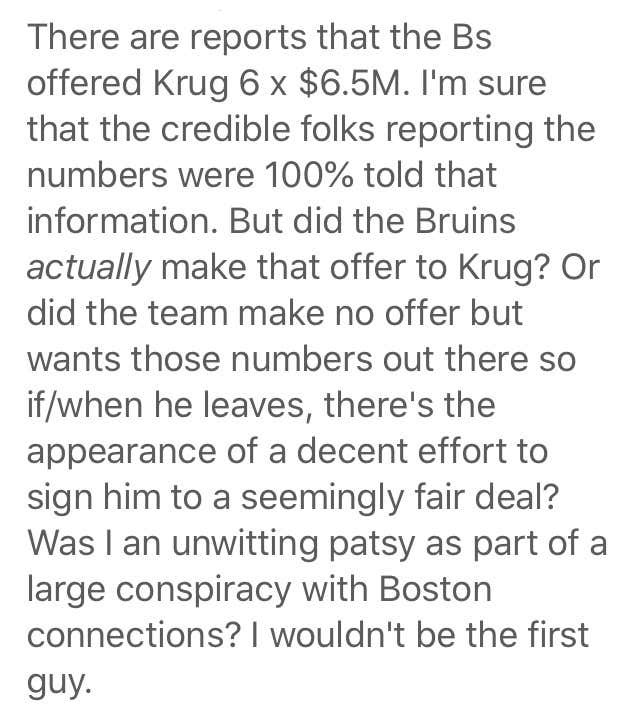 The Bs never spoke to Krug once the season ended. And that "6x6.5" didn't just appear out of the ether (it has the whiff of a page from the Red Sox Front Office Dirty Playbook©). So I'm curious to see what Don Sweeney says in his presser tomorrow. If the Bs decided to move on without making any effort to keep him, just say so and that they're going to use that money for scoring help and wish Torey the best.

I once stopped calling a girl I went on a couple of spark-less dates with. I later bumped into her in a bar and she said, "So you're not gonna call me anymore?". I replied, "Well, I wasn't gonna call you to tell you I wasn't gonna call you anymore." That is to say that I don't know what the protocol is in these situations and if it varies depending on the team/shot-caller. Do some teams give courtesy calls out of respect to longtime employees that their services are no longer needed? Do others just quietly move on to the next one and confirm yet again that players are meat for billionaires? Does it depend on the player?

Regardless, Krug is a now a Blue and Bruins fans are grateful for the balls-out effort he always gave.

Hey look, the Bs reached out to Krug.

At least I was right about him not going to Detroit…

So what do the Bs do now?