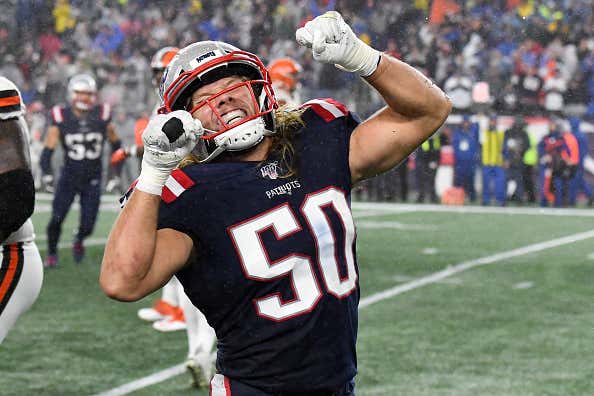 Chase Winovich did his weekly appearance on Scott Zolak and Marc Bertrand's show on The Sports Hub and was asked the obvious and typical question you'd expect every athlete would get at this moment in history, the one about the challenges of getting ready for a football game in a pandemic. His answer was anything but obvious and demonstrates this guy is anything but a typical athlete. 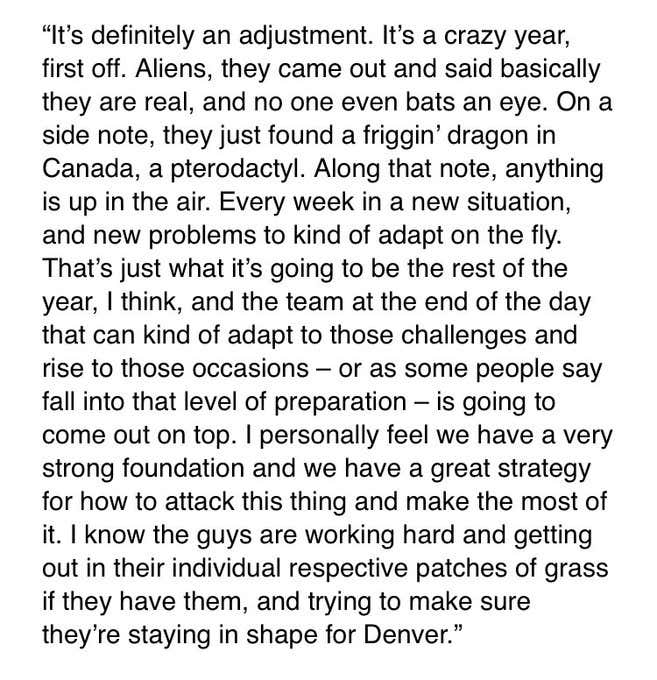 Bloody hell. And I thought I liked this guy because he plays like a feral maniac. Because he's made the coveted Second Year Jump, going from a situational role player to an every down edge defender who leads the team in sacks (2.5), TFL (3) and QB hits (6, twice as many as anyone else). Because Pro Football Focus has him graded as the sixth best pass rusher at his position in the league.

But now I find out his eyes are open to the fact the government is admitting to an alien presence on Earth? And he's bringing Canadian dragons into a conversation about the 2020 season?

I want to do karate in the garage with this guy.

I've made it clear on here many times the UFO phenomenon is very real. Most recently, yesterday:

But this Canadian dragon/pterodactyl was news to me. But it is, in fact, news:

CTV News - One of the largest creatures ever to fly on this planet had a wingspan about the length of a school bus and soared through the skies of Western Canada.

Fossils for the winged pterosaur, dubbed the cryodrakon boreas -- or “frozen dragon of the north wind” -- were found in Alberta 30 years ago. But researchers initially mistook the remains for that of a similar, previously known species.

But new research published Monday in the Journal of Vertebrate Paleontology contends that the fossils are that of an entirely new flying reptile with a wingspan of up to 10 metres.

The uncovered skeleton -- which consisted of the wings, legs, neck and a rib -- is believed to be that of a juvenile cryodrakon. Full-grown, the ancient lizard would have weighed about 250 kilograms -- slightly more than a full-grown pony, according to researchers.

Cryodrakons are believed to have been carnivores that preyed upon small animals such as lizards, mammals and smaller dinosaurs. They would have lived in the region about 76.6 million years ago during the Cretaceous period.

Chase Winovich, Renaissance Man. Football player. Edge setter. Pass rusher. Special teamer. And now we can add UFOlogist and paleozoologist. Now coming on the vast cultural wasteland that can be Boston sportstalk radio and dispense some knowledge to the masses. And I love it. If there's one thing Boston sports has been lacking lately, it's interesting, peculiar characters. Unless you were really into Kyrie Irving's brand of weirdness, and I don't know a single soul who was. Granted, you can be the most compelling personality in the world, but it doesn't mean jack squat if you're not making life miserable for quarterbacks on the weekends. And since he's been checking that box, I'm all about his interest in the paranormal and paleontology.

A couple of final notes about the cryodrakon boreas. First, they have no idea what colors animals were, they just render it to look like the Canadian flag because, why not? And as much as I think the name Frozen Dragon of the North Wind has a great ring to it, they missed an opportunity here. I know Season 8 was a huge disappointment. But you can't have a frozen dragon and not name him Viserion.

What kind of science nerds are you people, anyway?