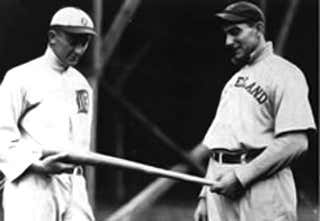 Controversy arises in the race for the American League batting title as Cleveland’s Napoleon Lajoie gets eight bunt hits in eight at-bats against the St. Louis Browns to take the batting crown away from Ty Cobb of the Detroit Tigers. Browns’ manager Jack O’Connor orders rookie 3B Red Corridan to play deep to allow Lajoie to get his bunt hits due to his hatred for Cobb. Despite Lajoie’s 8-for-8 day, Ty Cobb wins the crown .385069 to .384095. O’Connor and coach Harry Howell would get a lifetime ban from baseball.

There was extra spice added to the batting title in 1910, as the Chalmers Motor Company would award the winners in the American League and National League a Chalmers 30 Torpedo Roadster. Sherry Magee of the Philadelphia Phillies ended Honus Wagner’s four-year lock on the batting crown, posting an average of .331.

Napoleon Lajoie was born on September 5, 1874, in Woonsocket, Rhode Island. The son of a French-Canadian immigrant, Lajoie, began playing semiprofessional ball at an early age. He had to play under an assumed name, as his father disapproved of baseball players. When scouts noticed Nap Lajoie’s speed, he began to get offers from professional teams, signing with the Philadelphia Phillies in 1896. Lajoie was poached by the Athletics in 1901, as the American League sought to challenge the National League. A year later, he signed by Cleveland, a that would become named Naps in his honor.

Tyrus Raymond Cobb was born on December 18, 1886, in narrows, Georgia. Nicknamed “the Georgia Peach,” Cobb was known for sharpening his spikes to injure opposing players where he slid into bases. Cobb made his debut with the Tigers at end of the 1905 season. Two years later, he proved himself to be among the best in the game as he won three batting titles and led Detroit to three straight pennants.

The Tigers and Naps were not pennant winners in 1910, as Detroit finished in third place with a record of 86-68 for manager Hughie Jennings. The Naps, meanwhile, finished fifth at 71-81 for Deacon McGuire. Batting .385 Ty Cobb rested the last two days of the season, knowing Lajoie would have a tough time catching him.

Napoleon Lajoie was popular around the league; Ty Cobb was hated. The last-place St. Louis Browns ended the season with a doubleheader against the Naps and decided to help Lajoie win the batting crown. Manager Jack O’Connor ordered his rookie third baseman to play need inviting Nap Lajoie to get on with bunts. Lajoie went 4-for-4 in both ends of the doubleheader as the teams split the doubleheader. On one play, an error was ruled, but the call was changed when coach Harry Howell bribed the official scorer.

When it was learned that O’Connor and Howell allowed Napoleon Lajoie to get eight hits, American League President Ban Johnson acted swiftly, banning both from the game of baseball. Despite the shenanigans from St. Louis, Ty Cobb won the batting .385069 to .384095. Cobb would win the batting crown 12 times in 13 seasons, including nine in a row from 1907-1915. He would finish his career with a .367 average.

Chalmers seeing the controversy, declared a tie for the batting crown and gave both Ty Cobb and Nap Lajoie new automobiles. Chalmers would ward cars to the MVP winners starting in 1911. However, financial troubles led to the award being discontinued in 1915. Years later, an audit determined a game was counted twice for Cobb, in which he went 2-for-3. Taking that game away, Lajoie would have won the batting title.