I've been pretty fortunate everywhere I've lived so far. I've never had to deal with an absolute piece of shit for a neighbor. Now I'm a big believer that assholes typically end up attracting other assholes. Not to stroke myself off here too much but I'm a quality neighbor to have, so maybe that's why I haven't had to deal with any pieces of shit yet.

But if I were to have a piece of shit neighbor to put up with? Well it would be best to have a fella like Randy Bobandy over here.

Tarps off, belly out, fists flying around like a whacky waving inflatable tube man.

I love that little clap right before the "let's do this, mother fucker". You know this slob was just begging for a fight so that he could feel anything in his life. Doesn't even need to be satisfaction, he just needed to feel something. He was so ready to go, so confident that he was about to cave his neighbor's skull in, until he remembered that he's a fat scumbag who hasn't been sober since January '12. A couple of missed haymakers right off the bat and now he's completely lost the element of surprise. Which, of course, leads to this position. 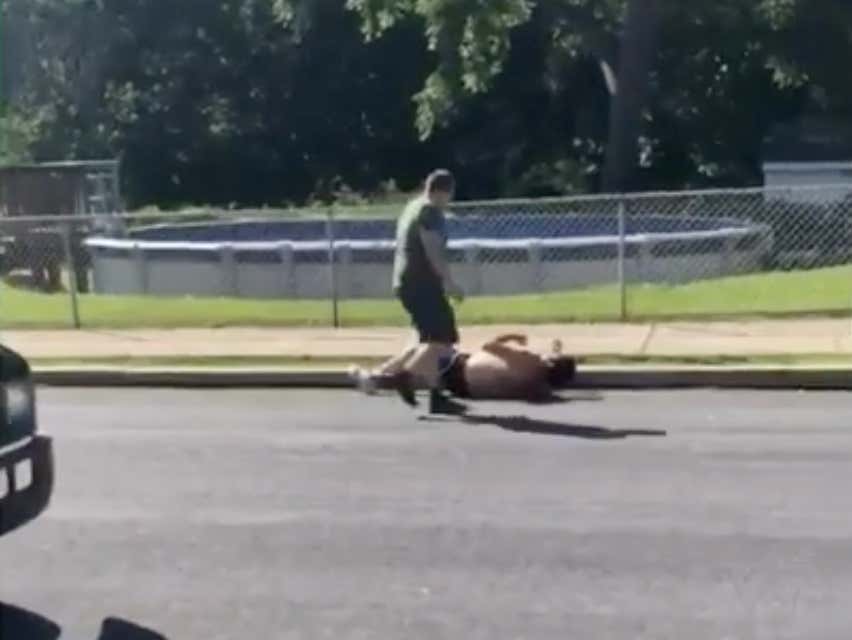 In the street, shirtless, on your back, with your neighbor standing over you and an above ground pool in the background. That, my friends, is what we call rock bottom.

But yeah. If you're going to end up having a shitty neighbor, I guess it's always best that they suck at fighting. Because even if you have to put up with their nonsense until one of you end up moving, at least you can get a few fight wins under your belt in the process. Would hate to have a shitty neighbor who can kick your ass because then there's simply nothing you can do about it.