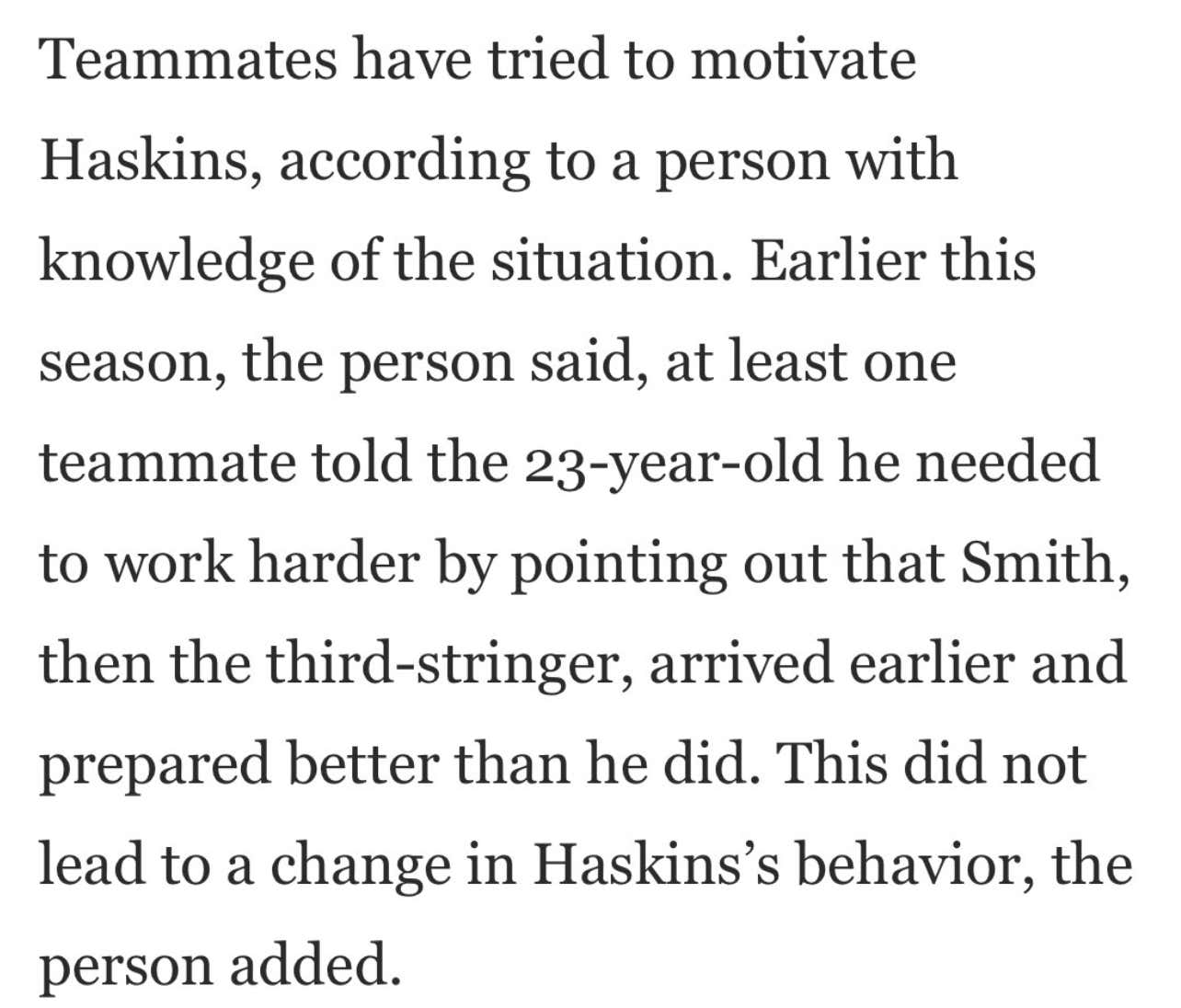 The more things change, the more they stay the same. And what I mean by that isn't about the QB, but the way information and leaks spread out of Washington Football Team Park and into the media. Nothing is kept inside when it comes to this team. It was this way with RG3, Kirk Cousins, and now with Haskins. Everyone talks, throws people under the bus, and plays the politics game. It's been this way since Dan Snyder bought the team, and surprise surprise, hasn't changed since.

The concerns represented a departure from the effort Haskins had shown in winning the starting job during training camp, for which he had drawn praise from Rivera. Something seemed to happen to Haskins after winning the job, the person familiar with the situation said, and his work habits deteriorated. Another person who has seen Haskins at practice this season noticed Haskins being sloppy during pregame warmups, while Allen worked diligently in those same drills even though he was unlikely to play in the game.

I mean that last line is just pure politics. I take all articles with leaks like this with a grain of salt, but the line sounds purely agenda-driven. I don't know. Call me crazy, but I'll always be skeptical about things like that, albeit I think usually there is always truth to the reports.

This is the crux of my argument for Haskins, again from the Washington Post:

In some ways, Haskins has never gotten a fair shot with Washington. Former coach Jay Gruden did not want the team to draft him, creating a challenging start to the quarterback’s career, and Haskins’s 11 NFL starts have come under two coaching staffs with different offenses, behind a patched-together offensive line and surrounded by limited talent at the skill positions. Past coaches have always praised his ability to quickly understand offenses and concepts and have often said he simply needs time to adjust to playing against NFL defenses.

This season was supposed to be about giving Haskins a shot to learn, develop, and see what he's made of. Pulling him after 4 weeks does not do that. Now he becomes a wasted 1st round draft pick to add to the pile. It also goes against the message Ron Rivera has been touting for the last 9 months about how Haskins will be given a chance and this season isn't about winning. But now all of a sudden he's changed his tune which I find…disconcerting. And it's nothing against Kyle Allen, I hope he succeeds, that would be great, but I hate the idea of throwing Haskins away after 10 starts. It doesn't seem right. And then this story gets leaked that miraculously buries Haskins, the day after? It's suspicious.

I hope Haskins uses this as a lesson and pushes him to push himself harder and get back to being a starter. There's no better motivation than riding the bench. If he ain't the guy, he ain't the guy, but I don't think we know that yet. It'll be interesting to see how this QB situation plays out. And don't forget, Alex Smith is now the back up. We could be seeing Alex Smith take back the starting job any day, which is crazy but also awesome.

But most importantly, fuck Dan Snyder. This is all his fault. The last coaching staff wasn't sold on drafting Haskins, and now the new coaching staff wants to shop for their own groceries. And now Haskins is the odd man out. Way to go Dan, way to fucking go.