I believe that no matter where you are on the political belief spectrum, for the vast majority of us, election season is the worst. For everyone who's not on on the fringe, it's an enervating, dispiriting, exhausting slog. It's democracy's dental cleaning. Necessary, but something you endure rather than enjoy, unless you're a real masochistic closet case. And this year is that, only exponentially worse.

The one thing that can make this biannual season tolerable though, it's a good old fashioned sex scandal. Something we're likely not to have on the national level when the two at the top of both tickets look like they're running for the Del Boca Vista condo association. I'm old enough to remember some of the great one. Gary Hart responding to rumors that he was tomcatting around by challenging reporters to follow him around. Only to have a photo surface of him with a hot blonde on his lap on a boat called Monkey Business of all things. Of course Bill Clinton and Monica Lewinsky. Or for more recent vintage, John Edwards knocking up his campaign videographer while his wife was in remission from cancer.

There's just something humanizing about a candidate involved in a sex scandal. It cuts through the bullshit of their carefully stages appearances and campaign ads that show them being kind to old people, making friends with members of key demographic groups and standing on Mt. Rushmore with an eagle perched on their shoulder. It peels back the mask of the fake image they're trying to project and shows the terribly flawed human being they are. It proves that they're no better than the rest of us and are motivated by the same greed, ambition and lust as the rest of us. Like the old saying goes, Washington is just Hollywood for unattractive people.

And with that, a relatively quiet campaign season might have finally gotten some sizzle to go with the steak.

Source -The Democratic challenger in North Carolina's closely contested U.S. Senate contest has admitted to exchanging sexually suggestive text messages with a woman who is not his wife, but he said he will not drop out of the race.

Cal Cunningham apologized late Friday for the text message exchanges in which he tells the woman he wants to kiss her and she says she wants to spend the night with him. The messages were first reported by the website NationalFile.com.

'I have hurt my family, disappointed my friends, and am deeply sorry. The first step in repairing those relationships is taking complete responsibility, which I do,' Cunningham said in a statement. ...

Screengrabs of the messages show Cunningham told public relations strategist Arlene Guzman Todd, 'Would make my day to roll over and kiss you about now,' to which she replies, 'You're so sweet. I would enjoy that.'

Another shows Guzman Todd - who is also married - tell Cunningham, 'the only thing I want on my to do list is you,' to which Cunningham replies, 'Sounds so hot and so fun!'

The pair also plan for Cunningham to make up an excuse for his family and ditch a staffer so the two can meet and 'kiss a lot.'

A spokeswoman for Cunningham's campaign, Rachel Petri, confirmed the authenticity of the text messages.

I should point out here that I know nothing about this National File, other than I've seen it described as a far right site. Make of that what you will. I've never heard of it until this and I won't be answerable for whatever else is on there. Still, like this article says, Cal Cunningham's campaign has confirmed these messages are from him.

What will really make this the race to follow for the rest of the month is if we also get confirmation on these other texts that National File alleges are from Arlene Guzman Todd:

In one photo sent by Guzman Todd to a friend, she captioned “Likes getting oral. Will travel. And has lips too.”

As the texts continued, Guzman Todd began to have mixed emotions about Cunningham, at one point saying “quite frankly he doesn’t deserve my psy.” She then debated whether or not to formally end things with the Democrat rising star. …

In a series of texts, Guzman Todd admits she video called Cunningham after debating ending the relationship, and told her friend she wanted to “fk him one last time and break his heart.”

Then there's some really nasty insults directed at the candidate's wife, which I won't post here because I don't want to be responsible for collateral damage. But you can follow your own conscience click the link if you wish. It continues:

Guzman Todd reveals that she spent a week with Cunningham in his family home having sex, and only left because there was “something weird about f**king in another woman’s house.”

You want screencaps? Here are your screencaps. Make that, the alleged screencaps: 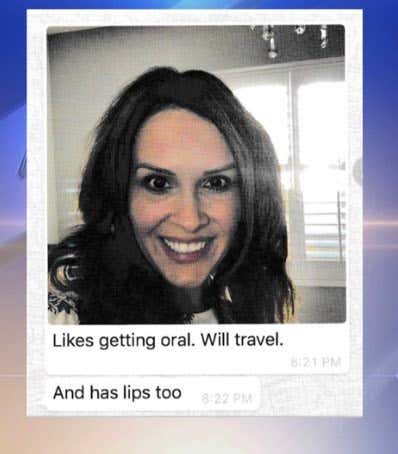 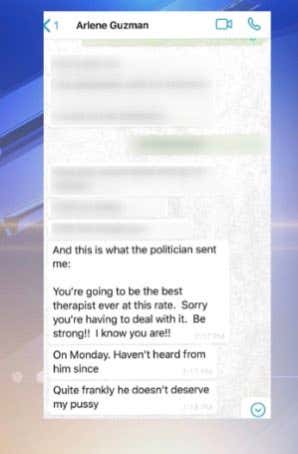 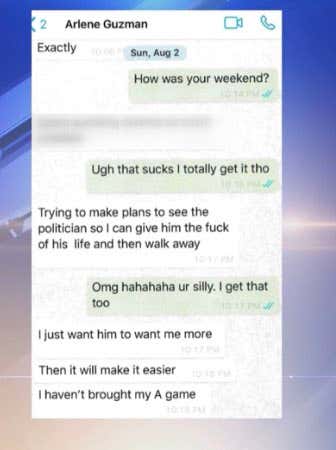 Did I say "alleged"? Good. How about "supposed"? OK. Let me add "reportedly" just to put a hat on a hat on a hat here. The end of the report is that there are more alleged texts coming out in the next few days, so this could be just the beginning.

It's one of those things that make you wonder why anyone would get into politics unless their personal and profession lives are purer than Caesar's wife. Because it's not the 1930s where an FDR could butter his toast on the other side and everyone kept a gentleman's agreement to keep it out of the papers and away from Eleanor. Things get out. Texts get shared. People you cheated on your spouse with and then end it on bad terms have ways to get back at you. And if they won't, then they have friends who might. But politics just seems to be lousy with people who can't help themselves. It's one of the only things that keeps it interesting.

Stay tuned for the next shoe to drop.