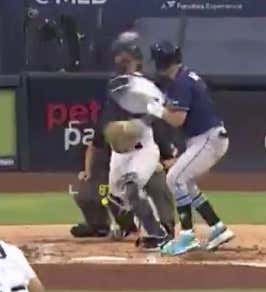 Disgusting. What a call. I'm not saying this umpire should be sent back to the Wild West, tied to a train track by some Arthur Blank looking villain with a locomotive speeding towards his body about to make a flesh soufflé. But I'm saying it should at least be discussed. Yankees fans far and wide are demanding the pitch above be called a strike. You know, the one about six inches below the bottom of the strike zone. These are the types of calls they've become accustom to over the years so it's tough to blame them. This rogue umpire clearly hasn't gotten the memo. Much like the umpire last night. It's a disgrace. It's as if the entire MLB is conspiring against the checks notes New York Yankees. As anyone who has ever watched baseball will tell you, the Rays rake in the type of ratings that are worth the potential fall out from a game fixing scandal to this level. Because while one pitch isn't enough to rig a series, the umps didn't stop there. Oh, no no no. The umpires went on to wallop TWO more home runs.

I can't blog anymore. I'm far too queasy thinking about the gross injustice going down in San Diego right now. Hopefully something gives and finally the New York Yankees catch a well deserved break. Maybe the umps can allow Aaron Judge to hit above .091 moving forward, it's the very least they could do!