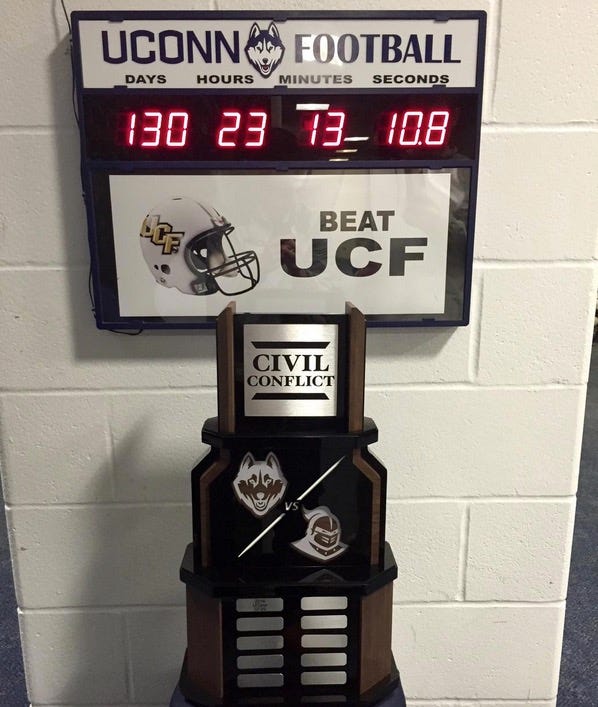 And now the story of UConn football being beaten down and humiliated by the internet. It all started with a tweet – 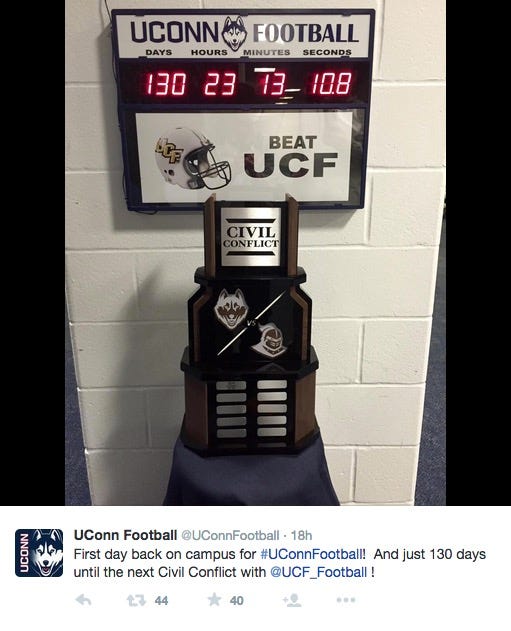 First thing that came to mind…what’s the Civil Conflict? Did you just make that up? I watch and read a lot about college football and I’m not sure I’ve ever seen the Civil Conflict. And who the hell is counting down the days to it so hard they need a 130 day warning? Not sure, but then, neither were 100% of the people responding to the tweet. 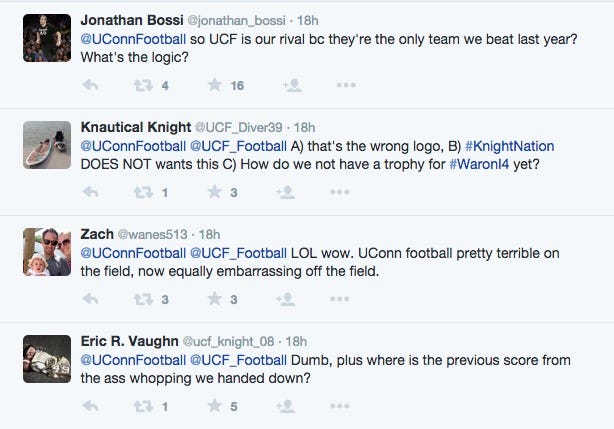 Turns out, UCF didn’t know either. 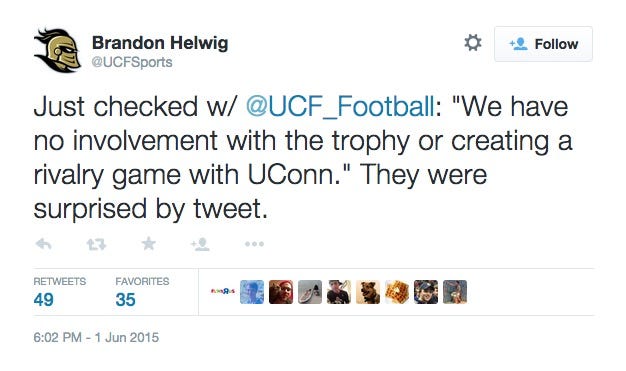 Turns out the “Civil Conflict” had been mentioned before…by UConn coach Diaco in a press conference after beating UCF last year for their only FBS win.

It has come to my attention that Diaco talked up the potential rivalry to the local media immediately after Saturday’s game as well as again on Sunday. He even has a name for it – “The Civil Conflict” – and already has a design in mind for the trophy.

Here’s what Diaco said moments after their 37-29 victory:

“We’re excited about this game. I mean it. I’m excited to continue this game. With all admiration and respect. All admiration and respect for Central Florida and Coach O’Leary. They’re spectacular. But we’re excited about this North/South battle. You want to call it the Civil Conflict? Maybe I’ll win my money and make a trophy. I’ll buy it myself. Put a big giant Husky and a big giant Knight on it. Make a stand. Put it in our hallway. The Civil Conflict. The loser, maybe they’ve got to put nutmeg on the stand when it’s not there and we’ll put a sack of oranges.

“With all due respect. I’m just trying to say I have admiration and respect for Central Florida and Coach O’Leary. We point towards that program as a program on how to operate. We’re going to look at that program to say these guys do it the right way. These guys play the kind of football we want to play and they play it every week. We’re excited about this contest and this North/South conflict.” [UCF]

UCF never accepted or officially responded. Props to UConn for just running with it though.

Poor UConn. At least the hoops team will probably come out of nowhere to win the NCAA tourney this year like they seem to do every other year?

PS – Any time you can start a blood feud rivalry between two schools 1200 miles apart that have played two times and 50% of the teams involved don’t want it/care about it, you gotta do it.