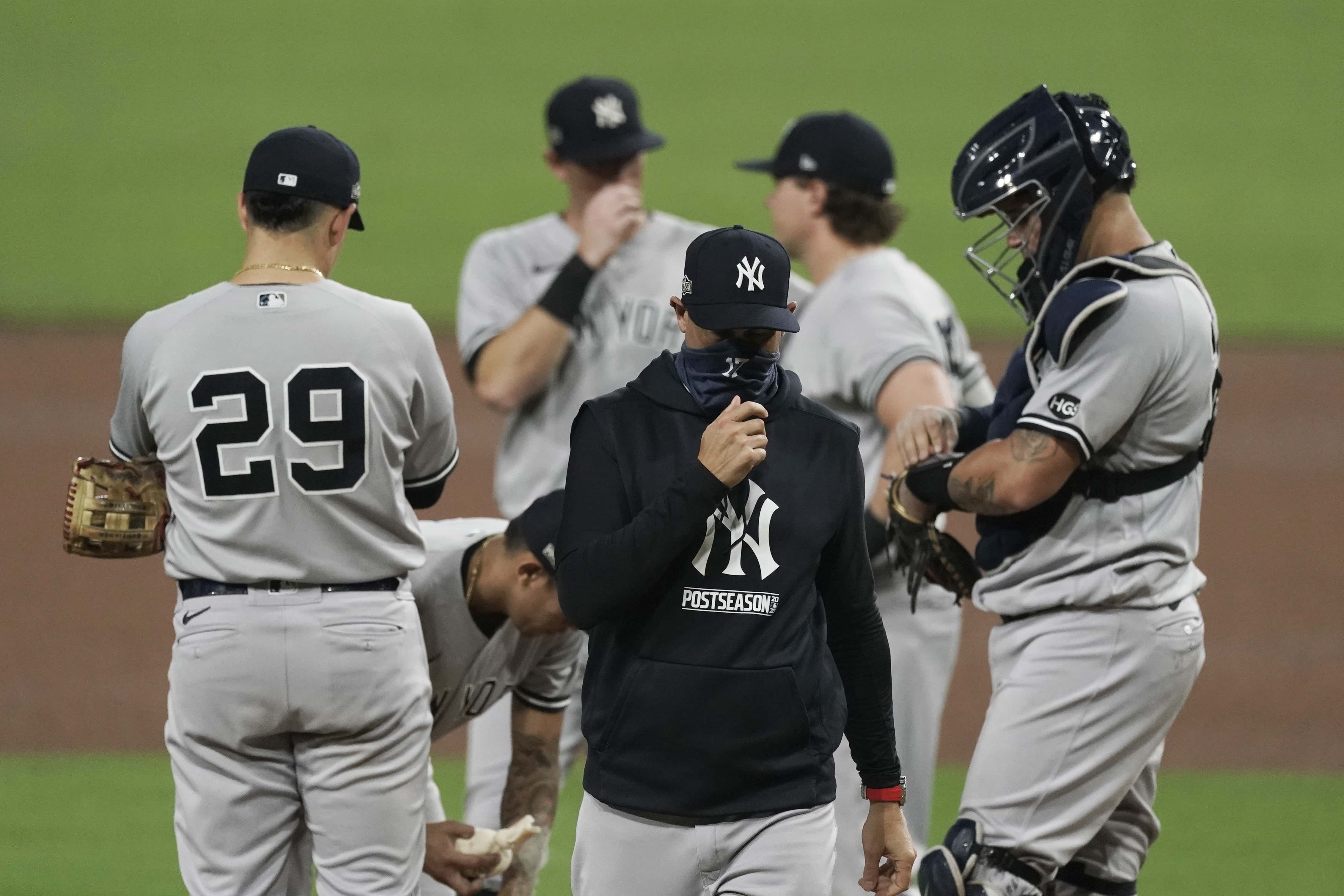 Game 2 of the ALDS between the Yankees and Rays may go down as one of the more infamous Bronx Bomber losses in postseason history when this is all said and done. Coming into tonight the Yanks 21 year old stud Deivi Garcia was tabbed as the starter. Following an all-around complete performance by the team in Game 1, there was a ton of momentum on the Yankees side. Just play your game, get Glasnow out of there early, and things should go your way. Nope, fuck that plan I guess, let's try and get cute and out-smart the Rays.

Deivi Garcia was one out into the 1st inning when the camera panned to J.A. Happ warming up in the Yankees bullpen. I thought my eyes were broken. What in the world was going on? Garcia was clearly not hurt, as he was pitching normally, and things were fine. Turns out the Yankees plan all along for Game 2 was for Garcia to be used an opener and have Happ come in as a surprise long man. Quite possibly the most unnecessary, mind blowingly dumb plan in the history of plans. Boone and company's plan was to trick the Rays into using a lefty dominated lineup and then throw Happ in there to fuck everything up. The only problem? JA Happ ain't scaring anyone in October, and certainly not the Tampa Bay Rays. Happ also isn't a reliever. Did I mention he sucks also? What the fuck!

Garcia gave up a solo shot to the red hot Arozarena with two outs and two strikes in the first, but overall looked fine as I said. His pitch count was at 27 pitches, but he certainly was capable of getting through four to five innings and turning it over to the pen. They didn't give him a chance. Instead it was Happ's turn. The left hander was greeted with a two run blast by Mike Zunino, followed by a Manuel Margot two run shot of his own in the 3rd. Just like that it was 5-1. Sick. Awesome plan you fucking morons. Why in the world would surprising the Rays with JA Happ be this unbeatable idea. No Yankees fan in the galaxy thought this was a good idea. Not a single one. Just pitch Deivi! You lose with him, okay I can live with that. Not this bullshit.

The Yankees tried to look so smart for no reason at all. Deivi Garcia has been awesome this year. He's a top pitching prospect in all of baseball and the Rays have never seen him before. You waste him as a gimmick for one inning. Why? Boone claims the plan wasn't to pull Garcia after one inning, but that's a giant load of bullshit. I mean Happ was throwing literally one out into the game. Just listen to Happ speak about it after the game. Says he was surprised about the plan, was told he would be coming in if a certain guy got to the plate, and implied he much preferred to be a starter (naturally).

Boone claimed they were going to feel out Deivi and make the decision based on that. Certainly was just a bold faced lie. There was nothing Deivi could have done to change his fate. You fucked with a kid's head for no reason at all. I will never understand it.

The Yankees trailed 5-1 and looked dead until Giancarlo Stanton stepped to the plate in the 4th, having already homered in this one, and blasted one of the furthest nukes I've ever seen in my life. I mean jesus christ this was tattooed. 458 feet my asshole. Maybe in yards.

Just like that it was 5-4. Stanton's fifth homer of the postseason already, and at the time his third in as many at bats which tied a Yankees postseason record held by Mr. October Reggie Jackson. Dude is locked in like we've never seen him before. This is Miami Stanton. Sadly, it wasn't enough thanks to the previously mentioned brain dead pitching plan to start and a lack of pretty much anyone else swinging the bat and making contact.

Certainly the Yankees were back in the game, but they didn't help themselves the rest of the way. The Bronx Bombes tallied 18 strikeouts in this one. EIGHTEEN. The only guy to not strike out was Aaron Hicks who seems to be putting together a productive at bat any time he steps to the plate.

A big part of the reason the Yankees struck out 18 times was the man we know as CB Bucknor. I truly believe this was the worst umpiring job in the history of sports. It was legitimately crazy what this man was calling for strikes. I mean pitches not even remotely close. There was a 3-1 pitch to Gleyber in the 9th that looked like it was an intentional pitch out. I nearly fainted. He was unbelievably bad. The reason the Yankees lost was because of the pitching plan, but Bucknor didn't help the cause.

There are a lot of people unemployed in the world today, CB Bucknor should be one of them. It's fucking nonsense he's umping playoff games behind the plate. He's been doing this for decades too. I know complaining about balls and strikes is lame, but this was insanity tonight. Fire this man right fucking now. This man is a menace to baseball and cannot be allowed to continue. Ryan Ruocco put it perfectly.

The Yankees had their chances towards the end to make some noise, but credit to the Rays pitchers who made pitches when it counted most. Top of the 7th down 3, Gleyber and Clint reached to start the inning off. Nick Anderson came in and struck out Gary, DJ, and Judge to end the threat. Anderson was untouchable in this one. Top of the 9th, same situation this time with Gio and Gleyber on. Clint and Gary struck out. DJ lined an RBI base hit, but Judge K'd to end the game.

The Yankees had tons of momentum going into this one and pissed it all away. Boone/Yankees front analytics terrible plan + CB Bucknor's incompetence + 18 strikeouts from the offense all result in a tied up series. You're basically in a 3 game wild card series now and Gerrit Cole won't be available until Game 5 on short rest.

So now you give the ball to Masahiro Tanaka. One of the best playoff pitchers I've ever seen. A man who lives for this kind of moment when your back is against the wall. I need this man's splitter splitting the ball in half Wednesday night. The Yankees bats have to come through, not just Hicks and Stanton. Judge needs to wake up. Voit, DJ, all of them. Do you even play Sanchez? I don't. Give me Higgy. Better win Game 3 because Game 4 is probably Jordan Montgomery. Because of this fucked up Game 2 we could be relying on JORDAN MONTGOMERY for an elimination game. Super duper shoot me in the face.

We've got a series now. In God we trust Playoff Masa. Please be magnificent.

P.S. Imagine they went through with this plan after a Game 1 loss? I would never sleep again.