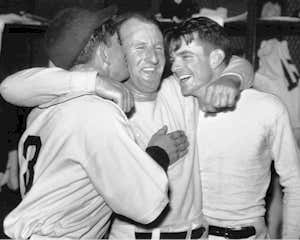 With a walk-off single by Goose Goslin, the Detroit Tigers beat the Chicago Cubs 4-3 in Game 6 of the World Series to earn their first championship. It was the Tigers' fifth trip to the Fall Classic that had previously lost in 1907, 1908, 1909, and 1934. It would start a year in which Detroit became the City of Champions as the Lions won the NFL Championship in December and the Red Wings won the Stanley Cup the following April.

After their agonizing seven-game loss to the St. Louis Cardinals in the 1934 World Series, the Detroit Tigers managed to win a second straight pennant, posting a record of 93-58 for player-manager Mickey Cochrane. Leading the way for Detroit was Hank Greenberg, who won the American League MVP with 36 home runs and 168 RBI. In the National League, the Chicago Cubs won the pennant with a record of 100-54 under manager Charlie Grimm. The Cubs took the pennant thanks to a 21-game winning streak in September.

In the opener at Detroit’s Navin Field, the Tigers had Schoolboy Rowe on the mound for Game 1, while the Cubs countered with Lon Warneke. Auggie Galan led off the game with a double and scored later scored on an error by Hank Greenberg. The Cubs added a second run on a single by Gabby Harnett. Both pitchers were strong as the Cubs did not score again until the ninth inning when Frank Demaree homered to make it 3-0. Both pitchers had complete games as Lon Warneke allowed just four hits in a 3-0 win.

In Game 2, Charlie Root looked to give the Cubs a 2-0 lead while Tommy Bridges was on the mound for Detroit. Root did not retire a batter as the first four Tigers scored. It started with a single by Jo-Jo White, Mickey Cochrane, followed with an RBI double and scored on a single by Charlie Gehringer. Next up was Hank Greenberg, who hit a two-run home run. In the fourth inning, the Tigers added three more runs, with Gehringer lacing a two-run single. The Cubs finally got on the board in the fifth, but they could not get back in the game as the Tigers evened the series with an 8-3 win.

As the series shifted to Wrigley Field for Game 3, the Tigers called up Elden Auker to make the start while Bill Lee made the start for the Cubs. The Cubs took a 2-0 lead in the second inning with a home run by Frank Demaree, while Bill Jurges scored after an error by Flea Clifton at third. The Cubs made it 3-0 in the fifth on an RBI by Auggie Galan. The Tigers began clawing their way back on a triple by Pete Fox in the sixth. In the eighth, the Tigers got a big double by Charlie Gehringer; next up was Mickey Cochrane, who had a two-run single to tie the game. Lon Warneke came on in relief and added two more runs to give Detroit a 5-3 lead. Schoolboy Rowe came on to get the save, but could not hold the led as the Cubs scored twice in the ninth to tie the game 5-5. The game went into the 11th inning when Jo-Jo White singled home Flea Clifton to give the Tigers a 6-5 win as Rowe finished the game to earn the win.

General Crowder made the start for the Tigers in Game 4, as Tex Carleton was the starter for Chicago. The Cubs got the first run of the game on a home run by Gabby Harnett in the second inning. Detroit quickly answered with an RBI double by Charlie Gehringer in the fourth inning. The Tigers took the lead in the sixth when shortstop Bill Jurges booted a ground ball hit by Crowder. It would be the last run scored, as the Tigers won the game 2-1 to take a 3-1 series lead.

Looking to stay alive, the Cubs started Lon Warneke in Game 5, as Schoolboy Rowe looked to being the title home for Detroit. Chuck Klein hit a two-run homer in the third to give the Cubs an early lead. Billy Herman doubled in the seventh to make it 3-0 as Warneke earned his second win of the series, with the Cubs winning 3-1 as Bill Lee earned the save after allowing one run in the ninth.

Back in Detroit for Game 6, the Tigers started Tommy Bridges, while Larry French made the start for Chicago. The Tigers got a run in the first on an RBI double by Pete Fox, while Billy Herman tied the game with an RBI single in the third. After Detroit got a run in the fourth inning, Herman hit a two-run homer to give the Cubs a 3-2 in the fifth. The Tigers tied the game in the sixth as both starting pitchers went into the ninth inning with the game tied 3-3. With one out in the ninth, Mickey Cochrane reached base with a single. Charlie Gehringer hit a ground ball to advance his manager to second with the series-winning run. Goose Gosling would proceed to hit a single to win the game 4-3 and give the Tigers the World Championship.