That's the look of a fat cat in pure elation.

We've all been there. You order a slice from your favorite pizza place (unless you're in Chicago where the dog shit pizza is only served in whole pies that they cut in squares. But I digress) but you order a slice and the nice lady behind the counter spins the pan skipping the thinner slice to serve you up the largest one. Or you order a stiff one from the bar and the bartender overpours for you while giving you a wink because you're just so damn charismatic.

You get the point.

A real life Garfield staring at an unprotected lasagna. So excited he doesn't even know where to begin.

This cat fucks. I don't care what your feelings are on felines.

Look at that face. He's awesome.

"Cats are for bitches you pussy"

Are some cats mangy?

Do old Italian women like my grandmother superstitiously believe they are reincarnated witches and people from the past?

Also yes. But to put it in context they also believe left-handed people should not be trusted because they're evil.

But cats and cat owners get a bad rap.

And no, I am not a cat person. I am an animal person.

Pets of all kinds I love. Dogs, cats, birds, the whole shebang.

I'm a huge dog guy. I've had dogs my entire life. Since I was a little kid.

I used to have a mini exotic short hair named Calvin. And he was the fuckin man.

Acted like a dog. Loved people. Would do anything for food.

Looked like a boss when I'd get him a "lion cut" in the summer.

Somewhere along the line cats started getting slandered and nobody ever stepped in to stop it. It's only got worse.

Do they shit and piss in a box inside your house? Yah they do and it's gross, but that's not their fault.

You see, Greg, when you yell at a dog, his tail will go between his legs and cover his genitals, his ears will go down. A dog is very easy to break, but cats make you work for their affection. They don't sell out the way dogs do. 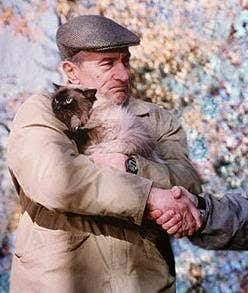 I wouldn't go that far, but it's time somebody made it known that you don't have to choose a side in dogs vs cats. You can love them both.