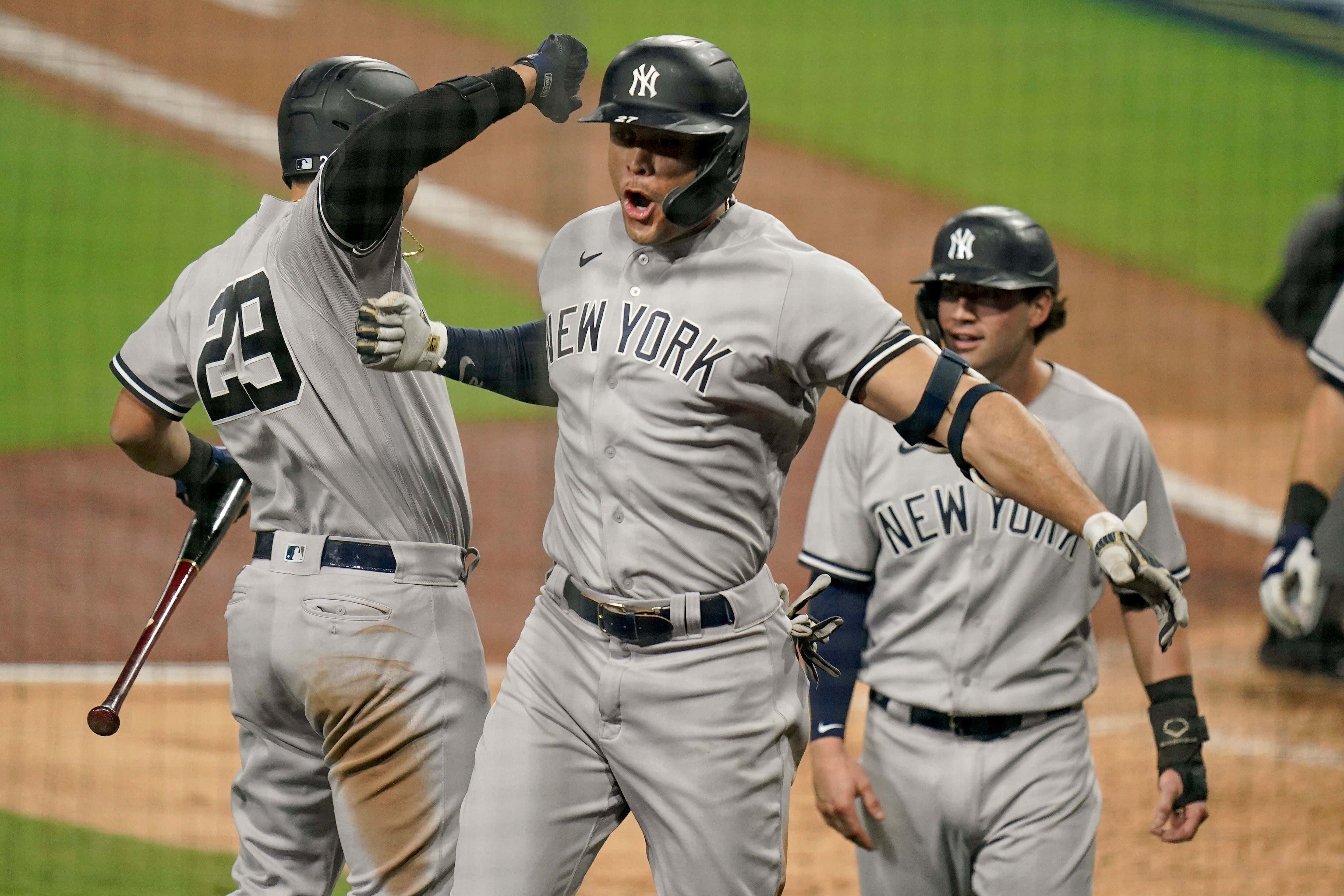 All weekend I was told the Yankees stood no chance in this series because the Rays won 8 regular season games against New York in 2020. That meant literally nothing in actuality as we headed into the ALDS matchup. The Yankees pounced on Blake Snell blasting three homers off him early. Gerrit Cole was just what we needed. The bullpen was fantastic, and Giancarlo Stanton delivered the knock out punch. It was a complete effort from this team. The Rays have been punched in the mouth.

The Yankees first blast of the game came off the bat of Clint Frazier. It continues to perplex me why he doesn't play every day without hesitation, but Clint thankfully got the start tonight and took advantage. 96 up in the zone, ambush into the night. Not sure if this landed.

I'm playing Clint over Gardner until further notice, and that notice will never come. That's my guy everyday, I don't care about your opinion. People saying Boone keeps pushing the right buttons. He got lucky with Gardner's big game 1. The move is Clint Frazier and always will be.

After Cole served up a pair of homers to Arozorena (fuck this guy) and of course Ji Man fucking Choi, the Rays grabbed a 3-2 lead heading into the 5th. The offense needed to pick up their ace after a few mistakes on his fastball location. They did just that thanks to Cole's personal catcher Kyle Higashioka and his giant mountain man right fielder Aaron Judge.

This offense wasn't going to be intimidated by Blake Snell. Those were two huge shots to put the Yankees back on top. With the lead back on their side, the Yankees needed Gerrit Cole to deliver two shutdown innings and hand the lead over to Green-Britton-Chapman.

After two quick outs to start the bottom of the 5th, Cole lost Brandon Lowe to a walk and gave up another hit to Arozarena (seriously fuck this guy). Who but Ji Man Choi was due up, the one man who continues to own Gerrit Cole's life. I have nightmares of this man with a bat in his hand. After starting 2-0, Cole and Higgy decided to give him first and take their chances with Margot.

Be an ace. Be the $324 million man. Cole went knuckle curve striking one looking. A cross up that landed in the zone, but was called a ball because of how much Higgy had to move his glove. Great play to save a wild pitch there by the way and possibly the tying run coming across. Then 98 right by Margot for strike two and 100 gas face fuck you and your mother strike three.

That right there was the ball game. His 6th inning was a lazy fly to center and two more strikeouts, thus ending his night at 6 IP 3 runs 8 strikeouts. Was it the most dominant start of all time? By all means no, but he was good. He made bad mistakes to Arozeana and Choi leaving fastballs over the heart of the plate that they tattooed. Cole didn't have his best stuff, but he grinded like an ace should to win this ball game. That Margot strikeout was a money pitch. Reaching back for 100 you're not hitting this pal.

Green and Britton would both turn in zeroes in the 7th and 8th to set up the Bombers bats in the top of the 9th to try and get some much needed insurance runs for Chapman. They did that.

A Higgy lead off single and a DJ walk set up Aaron Hicks with two on and one out. With Luke Voit out of the game for defense, Tyler Wade was due up next. Realistically this was on the Yankees centerfielder to make something happen or else Chapman would head into the 9th with just a one run lead. Didn't need that. Behind in the count 1-2, Hicks jumped on a hanger up nears his eyes for a MASSIVE RBI single to extend the lead to 2. Hicks had three hits in this one and the sac fly to get New York on the board in the first. Very nice game for a guy who constantly gets criticized for hitting in the 3 hole.

Wade then drew a bases loaded walk to bring up Giancarlo Stanton. Big at bat with a chance to really stretch this lead. All the Yankees really needed was a sac fly. He decided to deliver the knockout blow instead.

Stanton has homered in all three Yankees postseason games now. You wanna say Game 1's was a tack on, okay fine. Game 2's got the team on the board after trailing 4-0, and this one put it so far out of reach you could watch the bottom of the 9th with a smile on your face. Didn't have to use Chapman either which is huge considering there are zero off days in this series. So happy for Stanton. He gets so much shit for being hurt and not living up to expectations, especially in October, but he's shown up in 2020. Do not give up on this man I am telling you.

Also, in Tommy's continuous efforts to not know what do with his hands he basically throat punched me right after the grand slam. If you notice, I do not flinch, I do not fall down. I just move on like nothing happened, but don't kid yourself I could not breathe for 30 seconds. Fucking Tommy. I'll probably die in my sleep choking.

Following the grand slam, Kevin Cash decided to leave this bum John Curtiss in the game to get the final outs. He immediately threw a ball at both Gio and Gleyber's head. You wanna say Gleyber's was an accident fine, but Gio's sure looked intentional. Don't give me that he was nervous in the moment after giving up a bomb. Can you imagine what the reaction would be if a Yankees pitcher in this series gave up a grand slam to go down 9-3 and the 2nd pitch he threw afterwards buzzed someone's head? The Yankees would all be thrown in jail and the series would be cancelled. Just saying…

Anyways, big Game 1 performance all around. Cole, the bulllpen, the offense. Complete effort to start the ALDS. 3 down. 10 to go. Deivi Garcia tomorrow against Tyler Glasnow. Let's go win that too. Podcast is out too if you want some late night listening.