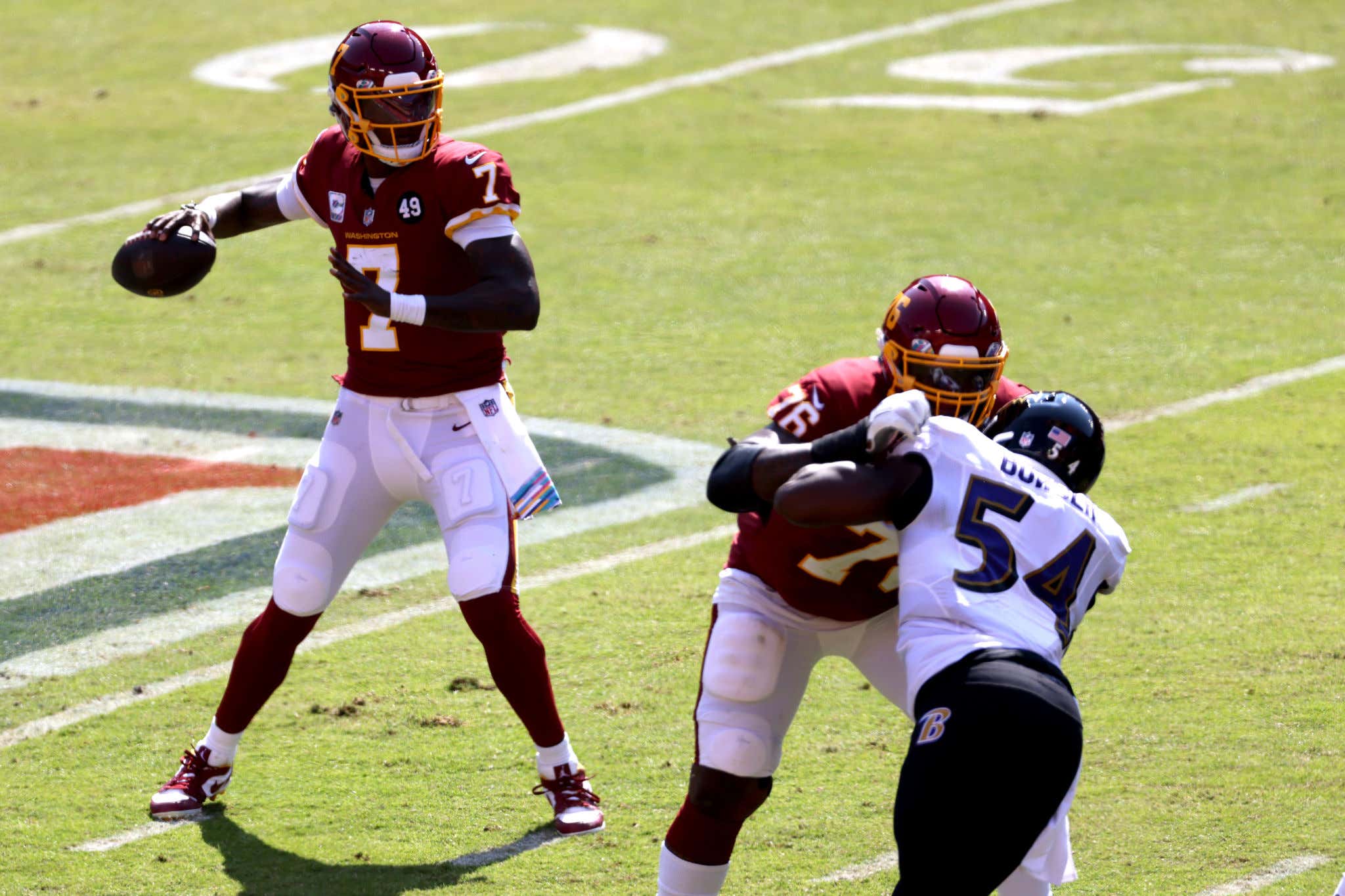 Obviously Dwayne Haskins has been hit or miss so far this season. Some good, some bad. And that is to be expected out of a guy who has started fewer than 20 games since high school. So what we are looking for out of Haskins is improvement. That was the buzz word floating around all week- Riverboat wanted to see that Haskins was learning from his mistakes and improving. And I 100% agree with that line of thinking. We don't need him to be a world-beater quite yet, just make a couple fewer bad plays each week until the majority of the mistakes are gone. Pretty fair.

And before I go on, I can't shake this thought out of my head- when did we stop allowing QBs to develop? It's so weird that in today's NFL QBs are given the shortest rope ever to do the hardest job in the world. I feel like growing up we saw QBs struggle but they weren't benched or written off after 4 games. It was just part of the process. It was to be expected that a rookie or 2nd year QB would struggle in the pros. And even for another example, think about how long it took a guy like Joe Burrow to develop at the college level. Things just take time. You can't expect every QB to be great right away.

But anyway, back to Haskins' game yesterday. I pleasantly impressed with his decision making and quick throws. The gameplan was simple- don't force things, take your checkdowns, and keep the offense moving down the field. So that's how against a good Ravens defense he ended the day 32/45 (71%) for 314 yards. No TDs, but also no INTs. The Ravens start 2 All-Pro caliber corners, and Haskins didn't get in trouble with either of them. What more can you want from him???

What gets frustrating is the goal posts continually get pushed back by people who just want to hate Haskins no matter what. "All he did was dump the ball down to Gibson". I hate that line of thinking. Now you want to trash the QB for making the smart throw and allowing his RB to get YAC? Besides, that's not even true. Gibson has 4 catches and McKissic had 7…but Terry McLaurin had 10 catches on 14 targets.

Dwayne had 0 turnovers, which is huge. Turnovers lead to points, and Haskins protected the ball. Took 3 sacks, but on 1 his Oline left a man unblocked. Could he have adjusted the blocking presnap? I don't know enough about that particular play design, but I'm under the assumption he didn't expect his tackle to not block on the play.

Dwayne Haskins completed 71% of his throws, didn't turn the ball over, and went for over 300 yards vs the Ravens yesterday. Yes, there is more to work on. But he followed the gameplan perfectly, given the complete lack of number 2 WR options he is working with. Would we hate on Carolina for feeding Christian McCaffrey? Of course not, because getting the ball into the hands of your most dangerous weapon is a smart gameplan. Same goes for when Haskins utilizes Gibson and McKissic- both are great receivers who can pick up yards, it'd be dumb not to use them to open up the passing game.

So overall, I'm satisfied with the development we saw yesterday. He ain't Peyton Manning yet, but he showed improvement, and that's all we can ask for at this point. A little better every week, that's what we want. But god dammit it sucks he doesn't have another WR besides McLaurin. He needs another weapon so badly.

PS: One last thing, the Daniel Jones vs Dwayne Haskins comparisons. I have not a clue why people (maybe it's just dumb dumbs on Twitter, sometimes it's hard to tell if it's just an echochamber or what) act like Jones is good and Haskins is bad. If Haskins turned the ball over as much as Daniel Jones he would have been benched weeks ago. I cannot believe how bad Jones is and how prone he is to turnovers. In his first 16 NFL starts Daniel Jones has 17 INTs, 20 fumbles, with 12 of them lost. 29 turnovers in 16 starts. Woof.

I don't know why he gets such a pass.