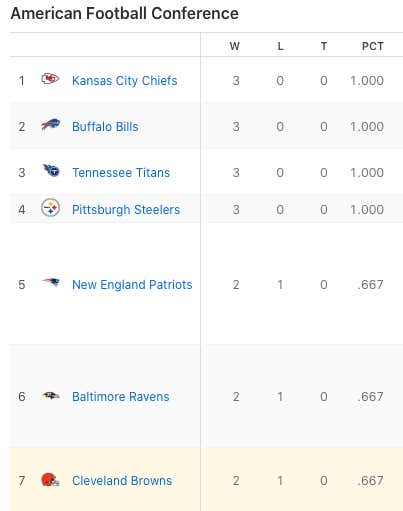 Gosh it feels so good to be still in the mix this late into the year. Right in the thick of things. On the cusp of the playoffs. Scoreboard watching. And with the Patriots not playing today, a Cleveland victory this afternoon would mean that Browns would be IN if the season ended tonight. Am I getting too far ahead of myself?

But here's all I've got to say about that: this isn't my first rodeo with the Cleveland Browns. I've been around enough to know that NOTHING good happens here, and even if the Browns go into Jerry's World today and knock off the Cowboys to move to 3-1, the world is going to come crashing down around us somehow. The stage is already set. Covid outbreaks across the league. The Browns finally have a team and a record and a head coach that will keep us occupied past Week 4, and the NFL is going to be forced to shut down and cancel the season. You just watch.

But we can't worry about what we can't control. All we can control today is the line of scrimmage and how much we throw on the Over 56 in the Barstool Sportsbook. Listen, this is going to be like a Big 12 football game: both offenses are prolific and both defenses STINK. I mean, forget the fact that the Browns have scored 34+ in each of their last two and the Cowboys have scored 40, 31, and lead the league in passing. Toss aside the amount of weapons on both offenses for one second. This game is going way over because neither defense can stop a nose bleed. A peewee team could get to 25 points on these defenses. I mean, the Browns gave up a total of 50 points to the Bengals and Washington. I think Dak, Zeke, and Amari Cooper may be a little more dangerous than that. And the Cowboys have given up 77!!!! points in the last two weeks. 792 passing yards, 9 passing touchdowns, and have gotten 0 interceptions. Folks, the Cowboys are giving up a passing touchdown every 12 attempts. Does the scoreboard in Jerry's World light up to triple digits??

I mean, if you're playing fantasy, start em if you got em. Baker, Dak, Zeke, Amari Cooper, OBJ, Chubb, Kareem Hunt, everybody. My question is, with the abysmal pass defense of the Cowboys, does Jarvis Landry finally make an impact today? He has 12 targets through 3 games…..not good. He's caught 11 of them though. And I think the Browns need to get him a little more involved to make sure we're using ALL of our weapons. If there's a prop for him in the Barstool Sportsbook, hammer that too. Not just because the Cowboys pass defense stinks, but because I think OBJ might be on the back end of a two day hangover….

My dude was ON ONE on Friday night:

Gosh darn it, OBJ. Two day hangovers start at about 26 years old and you're 27. We need all hands on deck for the Over today, and you're off the vino on a Friday night? I mean, you no one tweets 10 times in 10 minutes unless they are getting sheeeshed. I just hope you're in a good spot, OBJ. Not just mentally, but physically. We need points today.