(Even three years later, this is still such a gut punch. I remember thinking it was a cruel joke when word first started trickling out that he was in tough shape. I had just seen him twice and he was still as good as ever on the TPATH 40th Anniversary Tour. Alas, it would turn out to be true. Tom Petty had indeed died and much too soon.

On the occasion of three years since his passing, I'm posting the piece I wrote after he died.) 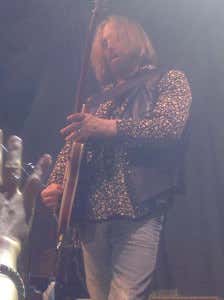 As a fan of the era that produced history’s greatest rock and roll music, I’ve sadly gotten used to writing these farewells to artists who moved not only myself but millions of others as well. Because so many of the great artists of from the 1960s through the 1980s are at what I’d call the Dying Age, it’s usually not a total surprise when we do lose somebody from that epoch of excess and hedonism. But every so often, one of these losses is nothing short of a devastating punch to the gut that saddens you and sends you running for their music to lean on (funny how that works). Late last night, Tom Petty joined the list of such musicians when his manager officially confirmed his death at the age of 66.

To put it simply, Tom Petty WAS American rock & roll. His distinctive, one-of-kind vocals combined with his stellar musicianship and songwriting abilities gave us an icon whose singular sound was America’s soundtrack from the mid-1970s to 2017. I could fill this blog with 5000 words just listing the titles of his good songs, whether performed with his Heartbreakers or on one of his solo albums (that always included a Heartbreaker or two). And his concerts? Always among the best in the industry.

Shortly after I got (erroneous) word of his death, I had to run an errand and our local classic rock station, WZLX, was playing Petty songs in tribute to the not-quite-dead Petty. While flying through the Tip, I found myself blaring “Yer So Bad” with both windows down. I went to sing along but instead just choked up as I struggled to get the words out and a tear streaked down each side of my face (as I briefly pictured myself on a candid YouTube as “CryinPettyFaninTunnel#pussy”). “Goddamn, not Petty,” I thought to myself.

Like most artists from that era, I don’t remember exactly when I heard Tom Petty & the Heartbreakers for the first time. Songs like the yearning “Breakdown” and howling “Refugee” were FM staples and always in the background of my early years. “American Girl” could be heard in “Fast Times At Ridgemont High”, one of the most popular films of the early ‘80s. But like many musicians from that time, it would be a new medium that would not only introduce them to a new generation of fans but allow them to show another aspect of their artistry—the music video.

For roughly the next decade, Tom Petty (and mostly with the Heartbreakers) dominated both the music and video charts; his trippy “Alice In Wonderland”-inspired “Don’t Come Around Here No More” video was the best of the lot. But he also churned out the rueful “You Got Lucky”, the now-singalong-staple “Free Fallin’”, the brilliant “Yer So Bad”, “I Won’t Back Down” and a handful of others. He had gone from musician with a couple of hits to global superstar thanks to the exposure that MTV afforded him (and all the requisite pitfalls that come with such a status).

It was also during this time he took part in helping George Harrison with a song but ended up helping create perhaps the greatest supergroup ever put together: The Traveling Wilburys. In addition to Petty and the Beatle Harrison, the group included ELO’s Jeff Lynne, Bob Dylan, and perhaps the smoothest voice to ever sing a tune, Roy Orbison. The short-lived group put out a pair of albums in 1988 and 1990 (only the first one featured Orbison who died in 1988), they were well-received by fans and critics, and still get significant play today.

In 1993, Petty released what would become his biggest-selling album, Tom Petty and the Heartbreakers Greatest Hits, and it very quickly became a staple in CD players and jukeboxes on college campuses for the ‘90s. I mean, look at the line-up. It’s loaded with banger after banger. It was the ideal album to put on because you could leave it on for the duration, whether you were at a party, playing NHL ’94, or booming your socks off. And it also sent me burrowing into his catalog so I could appreciate the albums the songs came from, back in a time when the album and its sequence mattered.

Through the rest of the ’90s and up until 2014’s underrated “Hypnotic Eye”, Petty (and various collections of Heartbreakers) continued to make excellent albums. Whether taking on music industry jackals, like 2002’s “The Last DJ”, or helping to tell the story in a movie as he did on the “She’s The One” soundtrack, Petty’s signature sound always shined through. “Room At The Top” off of “Echo” remains one of his great songs and “Wildflowers” one of his best albums. He also reunited his pre-Heartbreakers outfit Mudcrutch about 10 years ago; they went on to tour and release a pair of albums.

But when I really, truly fell in love with Tom Petty was when I finally saw him live in concert. Hearing his signature sound in person blew me away. It’s rock & roll personified. Just in your face, balls to the wall rocking out 100%, much heavier than the albums. I wish I could describe it in better “musical” terms but I’m tone deaf with a tin ear so I listen to music on a very rudimentary level—do I feel it in my plums? And I’m not sure any live act made me feel it in my plums more than TPATH.

The first time I saw him was at Great Woods in the mid-to-late ‘90s and afterwards I vowed I’d never miss him again as long as he came to town. And I didn’t. Every couple of years he rolled into town, whether at Fenway, North Station, or Portland, I’d always land sweet floor seats via his fan club and made sure to always grab an extra one or two tickets. With the extra(s), I’d take a pal or another couple who had never seen Petty live, with the sole intent of converting them into Tom Petty superfans.

Sure, they were familiar with a bunch of his tunes but just had never seen him. And every one of them was blown away after the show. “I didn’t realize he sang so many awesome songs I love” was a common refrain. “Holy shit, that was un-fucking-believable was another” was another. But I got legit joy “sharing” Petty with pals and seeing them appreciate the musician in a whole new light.

This summer when he did two shows on Causeway Street, I was feeling the blahs for whatever bullshit was going on in my life at the time. But I went to two Tom Petty and the Heartbreakers concerts in three nights and I didn’t know how much I needed them. Rocking out, in both the physical and mental sense, was just the catharsis the doctor ordered.

It was genuinely therapeutic to scream along at the top of my lungs with 15,000 other people “you don’t…have…to live like a refugee” and another 20 or so songs. Sweat, and stress, poured out of me. I wasn’t seeking healing of any sort but after each show, I felt…healed. Like a new man.

That’s the power of Tom Petty. Simply, his music makes you feel better. Always. And I’m going to miss the hell out of him.