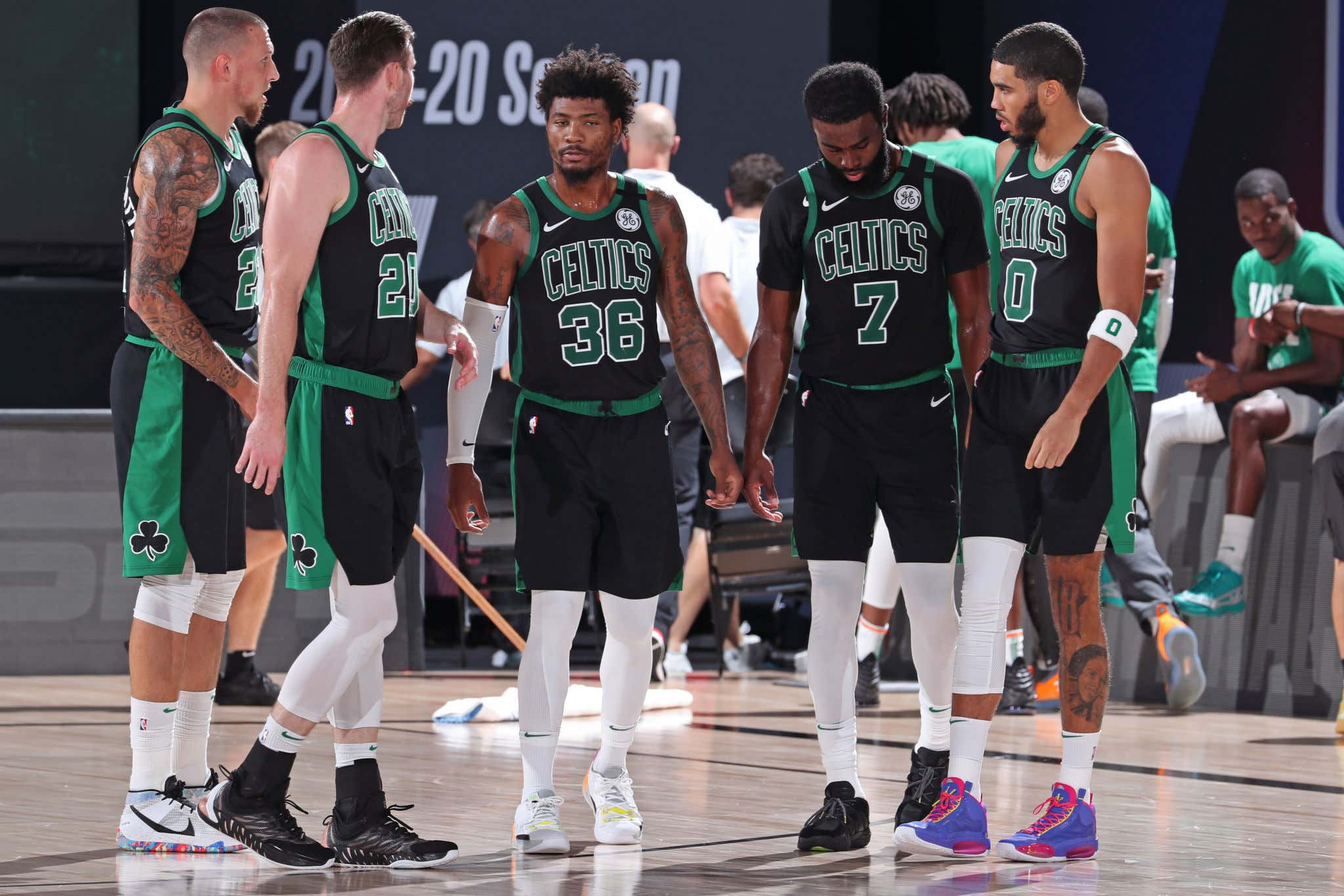 I had to wait a few days to write this blog. It's not like the Celtics season ending in frustrating fashion is anything new, it's happened that way in 32 of the 33 years I've been alive. Normally it doesn't happen with such a prime blown opportunity, but over the last 10 years we certainly have had our fair share of pain. Game 7 in 2010, Game 6 & 7 in 2012, Game 7 in 2018, all of 2019, and now this season's collapse in the bubble. When this sort of thing happens you have to be aware of a few things that will soon follow. First, opposing fanbases will dance on your grave. That's how it works. I had everything over the last few days and I'm sure other Celts fans did as well. Trolling from Sixers fans (weirdly), Heat Twitter and of course, Lakers Twitter. You have to do your best to not get triggered with it. That's just how it goes.

That's why I wanted to let all that shit pass before I wrote this reflection on the 2019-20 season. It's important to have some perspective, both with the good and bad. Believe me, there was plenty of both over the course of this insane season.

Remember what the narrative was around this team when the season first started. They were projected to win around 46 games depending on where you looked. Their Vegas number was 49.5. Many considered them the 5th or 6th best team in the East. They were supposed to crater defensively with the loss of Al Horford/Aron Baynes and would be lucky if Kemba was able to replace 75% of what Kyrie Irving was. Their offseason was a disaster according to some. Gordon Hayward would never return to the type of player the Celtics envisioned when he first signed. The list goes on and on.

- The Celtics finished with the 4th most wins in the league before the hiatus at 43-21. They finished the seeding games at 48-24 which was 5th in the league. Their .667 winning percentage would have been good for 54.6 wins over the course of an 82 game schedule. They drastically outperformed their season prediction.

- They finished with the 4th best offense / 4th best defense / 3rd best net rating. A pretty big difference from what many thought they would be able to accomplish, especially on the defensive end.

- Gordon Hayward had one of the best seasons of his career at 17.5/6.7/4.1 on 50/38% shooting. It was the highest FG% he's ever had, and the highest 3P% since his All Star season in UTA (39%). You could say he returned to the player they thought they were getting when they signed him.

- Kemba Walker didn't just change this team from a chemistry perspective, he put up an All Star season. He matched Kyrie's production for the most part with none of the drama.

- The two Jays erupted. Jayson Tatum turned into a top 15 player in the league. He showed on any given night that he can go toe to toe with the best in the league. Jaylen Brown had maybe the best and most consistent season of any Celtic. They are 22 and 23. The jump they took was exactly what all of us were hoping for.

- Remember all the frustration of underachievement we dealt with in 2018-19? That didn't really exist throughout the entire year. Sure they had bad losses just like everyone does, but it felt like they were finally playing to their potential.

it wasn't all positive. For example

- I don't think Rob Williams took the leap that we were all hoping for. He had his injury issues, defensively he was still making mistakes, and it was clear Brad didn't trust him

- Brad still had issues with timeouts and stopping a run. Maybe this is just how it will always be.

- They still weren't all that good in close games, just 6-5 on the year

- Their bench production was the 29th best in the league. Only the Blazers got less scoring from their second unit.

- Too often we saw them fall in love with the three and collapse in big moments because they didn't really have a plan.

- They somehow lost to the Sixers 3 times. Imagine that shit.

The list goes on and on. Now when you play for this city and this franchise, it's obviously all about the playoffs. All that success in the regular season doesn't mean dick if you can't replicate it when the games actually matter and both teams are going 100%. They Celtics playoff run was a mixed bag. Of their 7 playoff losses, only 1 came by double digits. In fact, it broke down like this

We saw both the good and the bad over this playoff run. They battled through adversity at times. Winning that Toronto series is nothing to sneeze at. But they also folded in huge moments. I think that's fair criticism. What we didn't see was the 2019 playoff version. This wasn't a situation where their talent level was some sort of huge gap that would warrant big time roster reconstruction or filled with players who quit. They just choked and didn't execute down the stretch.

I know a lot of people are mad about how Marcus Smart shot the ball in each of the losses against the Heat. It can be frustrating. Well, if not for his shooting in the Toronto series they don't even make the ECF. You can't have it both ways. The way they went out was inexcusable. Blowing double digit playoff leads is not something championship teams do, and the reality of the situation is the 2019-20 Celtics were not a championship team. That's OK. Their window is not closed. You don't have to blow everything up or make drastic changes. You improve around the edges.

This doesn't mean Brad and Danny are off the hook. They both own a fair share of blame in how this all unfolded. Brad getting out coached, Ainge not making roster tweaks at the deadline, it's all valid. But at the same time, they were right there. They don't turn the ball over 19 and 20 times in two of their losses, chances are they DO make the NBA Finals.

We live in this RINNNGGZZZZZZ or bust culture, especially in this city. Ultimately, it's all about hanging that elusive 18th banner. But when you take a step back and look at the season as a whole there's a lot to be excited about. A shitty ending doesn't negate all the progress we saw over the last year.

That's my biggest takeaway from the year. Ultimately it was a frustrating ending that was easily preventable. They left a great opportunity on the table, no doubt about that. But there are WAY worse spots to be in terms of the NBA landscape. We shouldn't pretend like this team won't continue to improve, why wouldn't they? The best players on this team haven't even approached their prime.