Today is the 10th anniversary of one of the best movies ever made, "The Social Network", about the founding and early days of Facebook. It is so incredibly fascinating re-watching the movie now, knowing what we now know about Zuckerberg, the scope of Facebook's influence on the world, and how different Facebook is perceived now compared to a decade ago. The biggest difference? Facebook used to actually be cool.

"The Social Network" came out at the perfect time for Zuckerberg and Facebook. It was when social networks were still young, Instagram and Twitter didn't exist to any point of making a difference, and everyone used Facebook nonstop. But it was also before Facebook disintegrated into what it is now- a place to share recipes, cat memes, and misinformation to sway elections. Back when it started though? Facebook was awesome.

I would not even know how to explain to someone how cool Facebook was when it was just college kids on it. I got in at the very end of it being just college, in 2006. The very first thing everyone did when they got their ".edu" email address was make a Facebook account. You would just write on your friends walls, you could see how many friends they had at other colleges, and it was just…fun. Addicting though, but we were none the wiser. There was nothing like it before. Myspace existed, but it was…different.

You also felt untouchable on Facebook because your parents couldn't see your page, your pictures, your wall posts, any of it. It was your own private bubble with your friends. And if you were like me and used AIM and Facebook at the same time, that year or two of overlap was the prime time. Kids these days have no idea what it was like to get a girl's screen name, add them, and hear that door opening sound for the first time…but that's neither here nor there. That feeling then evolved into adding someone on Facebook.

Now? Facebook is awful. To be honest I don't even know why we still have it, if you do. I don't have it on my phone and go to the website maybe twice a week? But I don't even know why I do that, there's nothing to see on it. It's really just out of habit at this point. Old people are obsessed with Facebook though. I don't even get it, who are you sharing these memes with, old folks? Your cousin Rhonda? 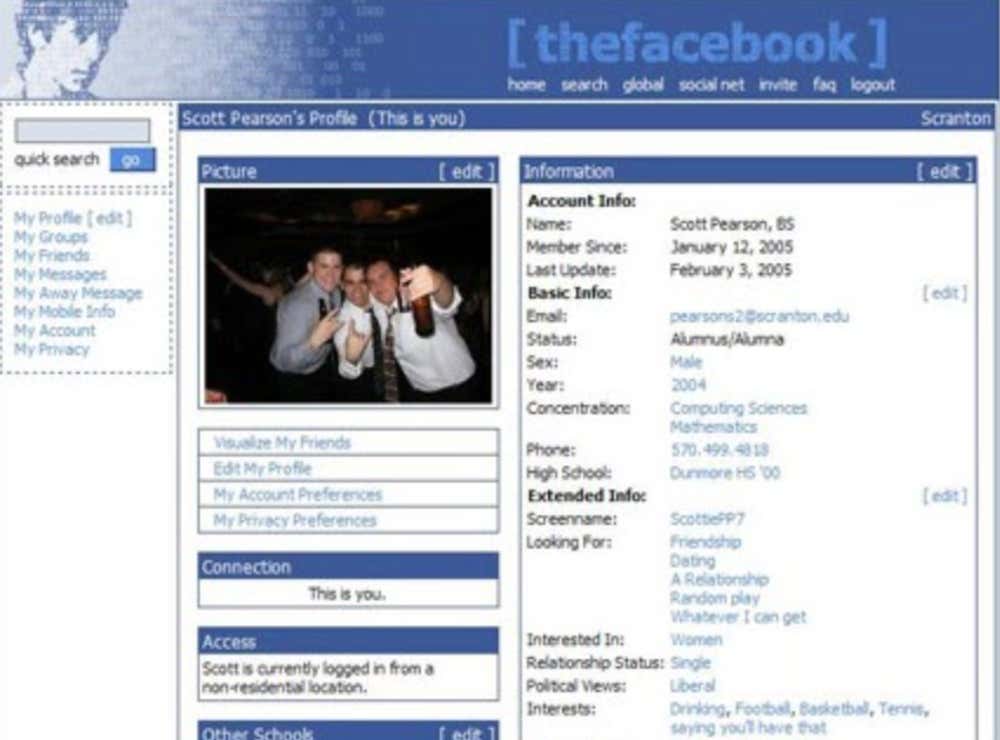 Cannot wait for the sequel to Social Network where they don't try to pain Mark as the sympathetic figure. I don't even fault him for stealing the Winkelvi's idea- Mark was going to be a bazillionaire regardless. And you could have given their idea to a million other people, and none of them would have made Facebook into what it is today. There's no denying Mark created something that is above and beyond the realm of possibility for 99.999999% of other humans. But man, what total piece of shit he turned out to be.