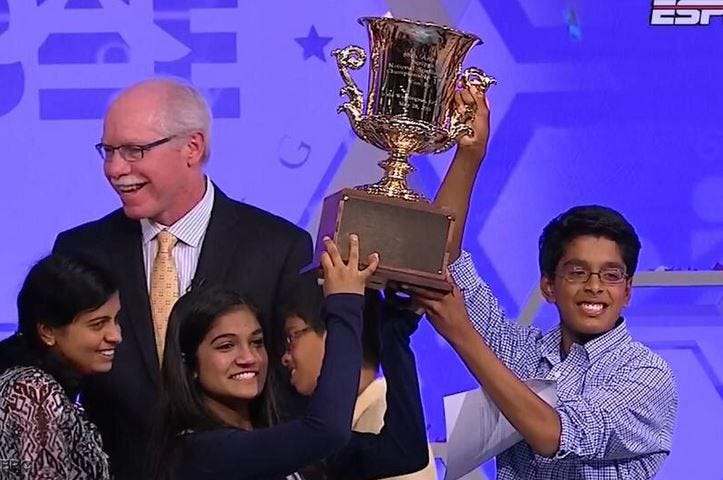 So for the 2nd year in a row we had a tie at the National Spelling Bee. Just a total joke. You play to win the game! You play to win the game! Like maybe I can understand it happening last year because they got caught off guard, but how do you let it happen 2 years in a row? Disgusting.   They need to change the rules ASAP. Start cutting down how much time they have to answer as the rounds go on. Make them spell each other’s full names. Make up fake words. First one to spell it right wins. Do something. Do anything. You can’t have ties.  Sanya and Goop are probably still standing in the dark refusing to let go of the trophy and I don’t blame them.

Anyway here are the top highlights from last night. 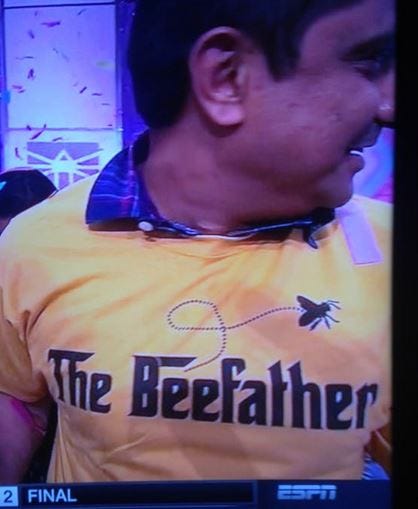 This was the dad of Sanya who was a co champion. Chick has been in this thing like 5 years in a row. Her sister was a past winner. Apparently giving birth to smart indian kids is what this dad does and the Beefather let everybody know about it. Just throwing up gangsta spelling bee symbols after every correctly spelled word. Then throwing on the Beefather tshirt the second the thing ended. Mean mugging for the cameras every chance he got. I don’t know if there are bloods and crips in the spelling bee world but if they are they are both afraid of the Beefather. He runs shit up in this house and he knows it.

PS – Lots of chatter that Sanya was the Danny Almonte of the Spelling Bee too. They had her listed at 13. I had her at least 20. 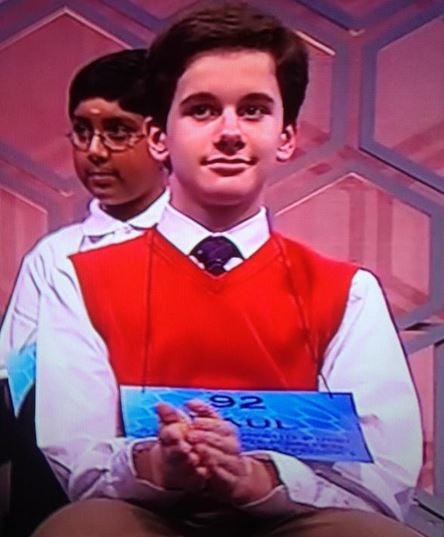 Absolutely sucked that Paul got bounced so fast. Just Mr. Electricity on the big stage. Kid just went up there each time and threw his nuts on the table and let the chips fall where they may. Tried to spell words before they even finished giving him the definition. While everybody else was high fiving each other he was all business.  Never has being slightly autistic ever been so sexy. Kid just had swag dripping out his ears.