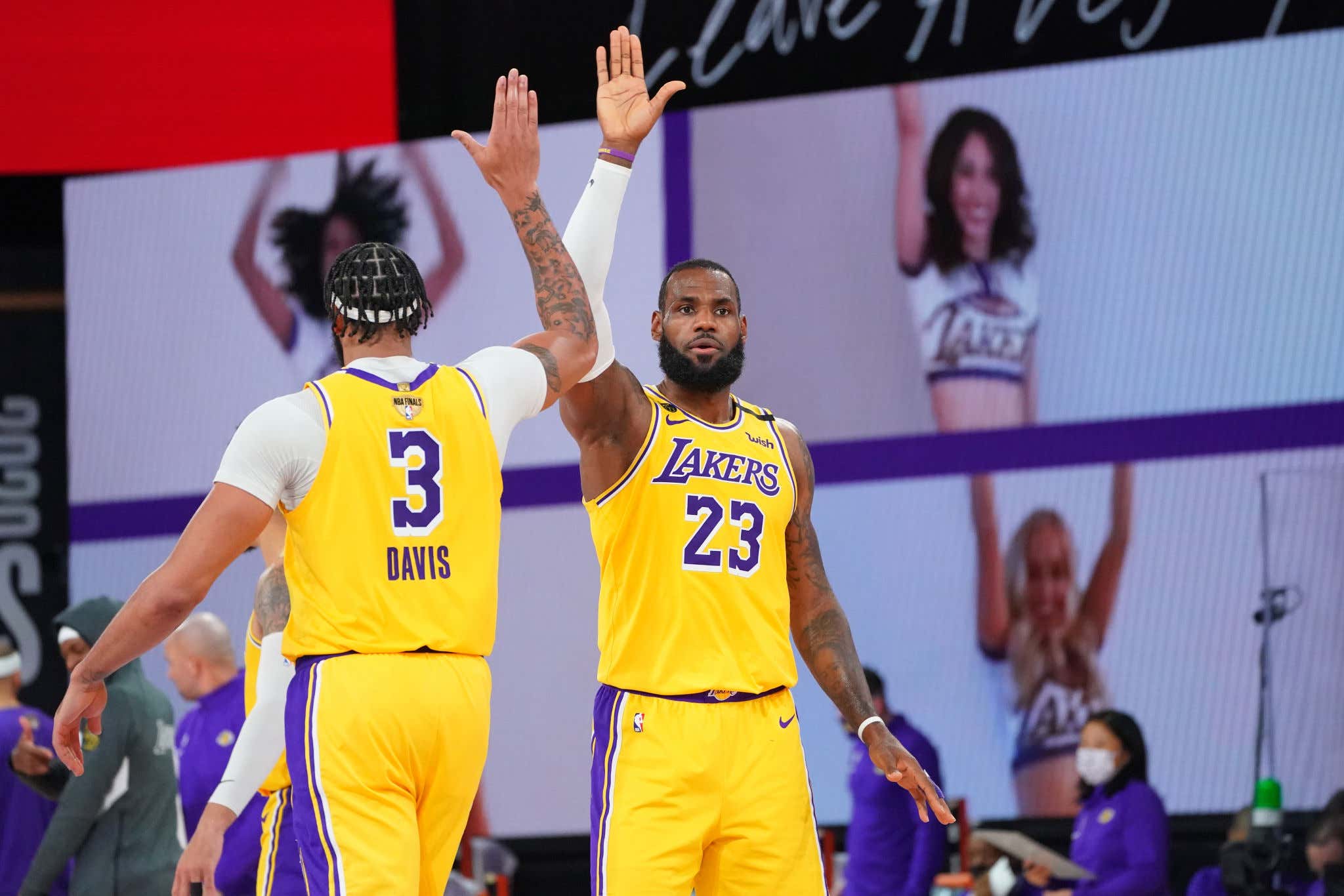 Good morning everybody happy Thursday and welcome back to another edition of Last Night In The NBA Where we bring you up to speed on everything that went down from the night before in the Association. After nearly 40 days we finally kicked off the NBA Finals in what was a pretty hyped up matchup going in. The big bad Lakers going up against the nobody believes in us Heat. Two teams that had shown to be the best of the bubble so far in these playoffs, the general consensus was that we were in store for a good series. Now, I'm not so sure. If you have no idea why I might think that because maybe you were watching playoff baseball like a weirdo or something, here's what happened.

First things first, do not let that final score fool you. This was a beatdown. I say that knowing that score shows a 18 point difference. It was much, much worse for the Miami Heat.  The Lakers basically took their foot off the gas over the last quarter plus of the game. This shit got as high as 32 and it stayed that way for the majority of the game. A complete and utter ass whooping as I said last night. It looked like a varsity team going up against a JV squad. Too big, too strong, too talented, everything outside of the first 6 minutes was all Lakers, so we may as well start with them.

Down 13 points early, the Lakers subbed out LeBron. A weird decision you might think, but behind KCP they rallied and were able to have a 16 point turnaround in basically no time.

You knew right then and there that MIA blew their chance. It doesn't help that no team in the league blew more double digit leads than them during the year if I'm not mistaken. It was as if they blew their load too early, their best punch barely drew blood, then the Lakers got pissed off and laid the hammer down. Of course a huge part of that was the performance of their two best players, as you can expect LeBron and AD did whatever they wanted

and was historic in its own right

Yeah I'm not really sure what the Heat can do about Davis. Especially is Bam is hobbled. Not that it really mattered anyway while he was out there, AD is just on another level right now.

But you have to give credit to the second unit for really being a difference maker in this game. During the first half when the Lakers made 11-17 threes, the secondary scorers went 8-14 from deep. That was that. If the "others" on the Lakers are going to shoot like that and help build these type of leads, their top end talent is too good to see them blow it. That's why guys like Danny Green, KCP, Kuzma, Caruso, Rondo etc are so valuable if they play well. They helped the Lakers get off to a great start and they never looked back. For a team that had shooting concerns, you couldn't see them in the first 24 minutes.

Here's what's crazy too. The Lakers missed 16 of their final 18 3PA and it didn't matter! The Heat never even came close to challenging once the third quarter started. It became clear that the Lakers were at their best when they took Dwight out and didn't go with two traditional bigs, and it wouldn't shock me if we see more of that in this series. Start him, let him play a little bit, but then move AD to the five and blow this team out. That's probably the formula.

For MIA, hard to have a bigger disaster than what we saw from Game 1. Even before all the injuries, their effort and execution was not the same we saw in the ECF. A lot of that had to do with what the Lakers were doing, but this did not look like the same team to me. It was as if they turned back into a pumpkin. Duncan Robinson went scoreless, Tyler Herro finished 6-18 and was a -35 which is tied for the worst plus/minus in a Finals ever. Andre Iguodala, the hero of Game 6, went 3-7 and was a -25. Jae Crowder, someone who started the game great, finished a -21. Their defense was nonexistent, they weren't making shots finishing just 42/31% from the floor, and because they weren't aggressive they got killed at the line 27-14.

Then the injuries started to pile up. Jimmy Butler twisted his ankle before the half, was able to come back and honestly still played well finishing with 23/5 on 8-13

But then Gordan Dragic had a plantar tear in his left foot and who knows what he'll be like the rest of the series. Halfway through the third quarter Bam fucked up his shoulder and did not return. I'm sorry, but if a team has an injured Butler/Bam/Dragic, I'm not sure what they can accomplish. That would be like if LeBron sprained his ankle. AD left with a shoulder, and like….Rondo tore his foot. That'd be a pretty big loss for the Lakers right? Well when your three best players get hurt, that fucking sucks. Why couldn't we just get a Finals with no injuries? Is that too much to ask?

All you can really do if you're the Heat is forget this game ever happened. Just because you lost Game 1 doesn't mean the series is over. Remember Dallas in 2011? The injury thing makes it tougher, I can't deny that, but hey if you come back and steal Game 2, it's mostly whatever. I will say the lone bright spot for the Heat is maybe Kendrick Nunn found his groove after not playing at all in the EF. He had a quick 18 points in 19 minutes and even though it was in garbage time, maybe it will get him in a rhythm.

And that's it! You are now all caught up with everything that went down last night in the NBA. We're back tomorrow night for Game 2, so do all your chores and shit today so you're free to watch. Have a great Thursday!