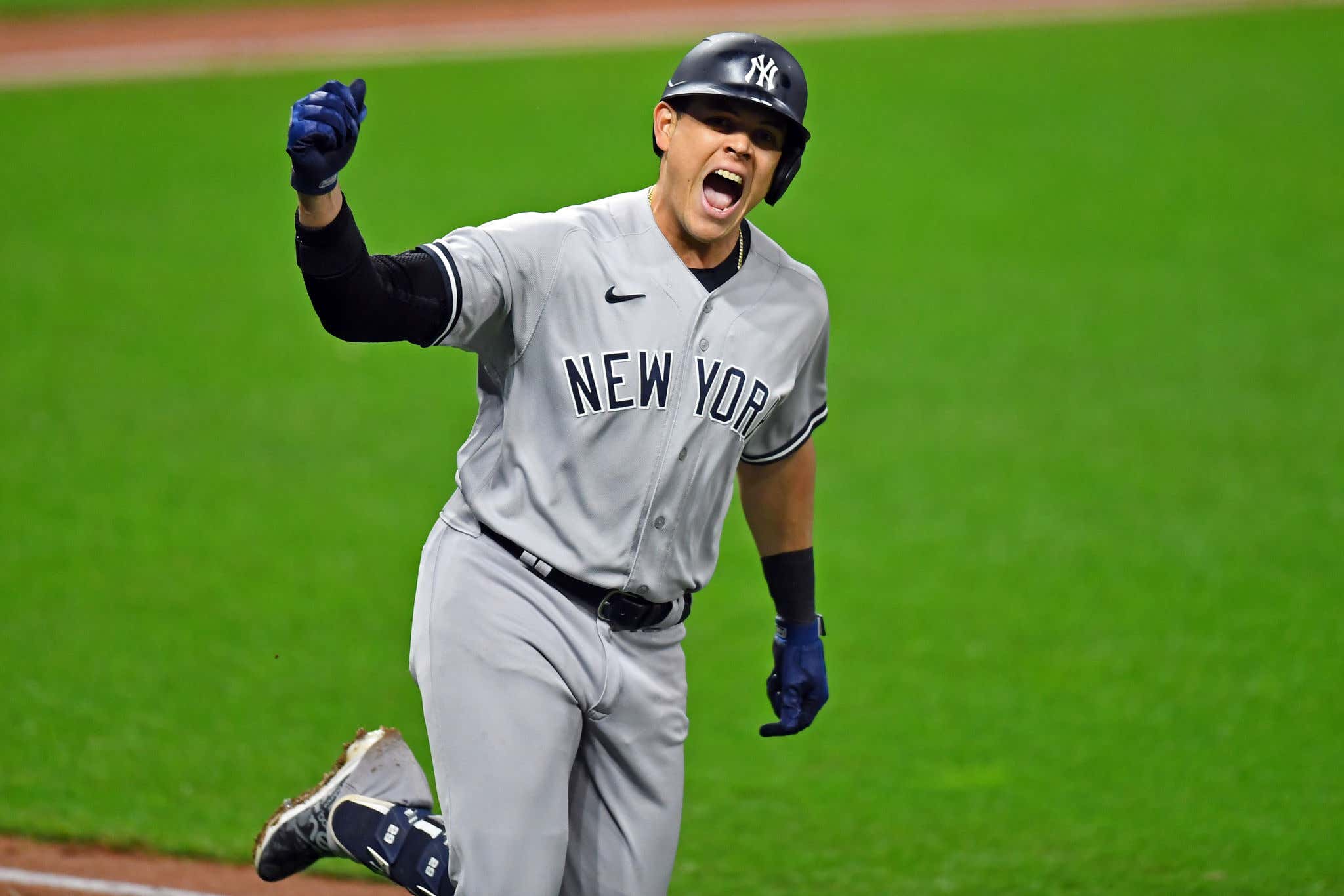 It's the middle of the night as I start this blog. The New York Yankees just won one of the craziest baseball games I've ever seen. One of those games you watch on YouTube years from now to try and remember all of the chaos that unfolded. Hurricane weather, blown leads, clutch hits, guys getting arrested, bonehead moves by managers, unbelievable defense, this game had it all. In the end, the Yankees swept the Indians and are headed to the ALDS in San Diego where the Tampa Bay Rays wait.

There was the weather debacle, but I'm not starting this blog talking about weather after what I just watched. If you're curious, go check out my earlier blog. The Indians had themselves an early 4-0 lead after the 1st inning and looked poised to runaway with this one and force a deciding Game 3. The Yankees of the regular season get the doors blown off of them in this one. These relentless Yankees refused to give in. Stanton answered in the 2nd with a solo shot to get New York on the board. G got some shit for hitting a tack on homer at the end of Game 1, but this one was big. It gave some life to the team and showed the Indians they weren't backing down. Carrasco could be hit. In the 4th inning Delino Deshields misplayed an Aaron Hicks line drive in center that put the Yankees CF at 3rd with nobody out. Two walks followed to bring up Gio Urshela.

The Indians took out Carrasco and brought in their maniac stud reliever James Karinchak. This guy legit thinks he's Rick Vaughn from Major League. Rocking 99, the haircut in the back of his head, this weird windup. Yeah Gio welcomed this asshole to the postseason with a go ahead grand slam. The first postseason grand slam ever hit by a Yankees third baseman. If you're gonna go Rick Vaughn you gotta rock glasses dude. What a buffoon.

Gio's bat flip following the slam was orgasmic. He never shows that kind of emotion at the plate, but when you hit a go ahead grand slam in the postseason you unleash that bat flip.

$25,000. The Yankees paid the Blue Jays $25k for this man. The Indians didn't want him before that. Just crazy how good this human being is at baseball and how overlooked he's been his whole career. I finally think the rest of baseball is starting to recognize and appreciate this man, but it's taken too long. He is a star. Yeah I said it. Star.

A Stanton sac fly extended the lead to two, but Chad Green quickly surrendered the lead after inheriting two Tanaka baserunners in the bottom of the 5th. Tie game. Real quick on Tanaka. You'll look at that stat line: 4 IP 5 H 6 ER 3BB 3K and think he was terrible. Fact of the matter is he kept the Yankees in this game. After his first inning that was messed with by the weather delay, he settled down for three innings and allowed the Yankees to avoid going to the bullpen and score runs to take the lead. Obviously he wasn't at his best, but he was way better than his statline showed. I'm so happy he'll get at least one more start with the Yankees in the postseason. With his contract up after this year, you never know when that could be the final time you see him. Tonight was not the end.

Following the Indians tying it up, Gary Sanchez came up with a man on against rookie stud Triston Mackenzie in the top of the 6th and lifted a ball deep to right. Off the bat I thought easy fly out, but the winds were swirling still and carried this baby out. Fucking GARY you son of a bitch.

The Yankees 8-6 lead would last until the bottom of the 7th when Zack Britton lost his control, walking two men after retiring the first two of the inning. The ever so dangerous Josh Naylor was due up, but the Tribe decided to pull him back for Jordan Luplow. The move made absolutely no fucking sense and Twitter lost its mind. Zero sense. Naylor had destroyed the Yankees almost any time he came up in these two games, and here he was in another dangerous spot. I was terrified. Nevertheless Naylor was pulled, and to counter that Boone went with the righty Johnny Loasiga. Of course Luplow proceeded to rip a two out two strike two run double over Aaron Hicks' head to tie the game. Unfuckingbelievable. Jordan Luplow. Somehow that nonsensical move paid off. It had no business working.

At this point I figured it just wasn't in the cards tonight. The Yankees weren't winning this game. Their bullpen was spent. It was in Loasiga's hands to figure this out after having already burned Green and Britton. You can't go to Ottavino in a tie game. Chapman had to wait. This was all fucked.

An inning later Lasagna walked the first two batters and had to be pulled for Chapman in the 8th inning and nobody out. On the very first pitch from the Cuban Missile, Cesear Hernandez ripped a single to center scoring the go ahead run in the bottom of the 8th. There it was. Checkmate right? It was the next two batters that helped keep the Yankees above water barely breathing. Chapman got Jose Ramirez to strikeout for out numero uno. Carlos Santana proceeded to rip a ball to 3rd where Gio Urshela saved the baseball game. Truly an unbelievable play from the seat of his pants. The Yankees do not win this game without this play being made.

I cannot describe accurately enough how amazing a play this was. Just stupid good from Gio. What can this man not do?

That set the stage for the top of the 9th. Brad Hand against the Yankees 5-6-7 hitters. Get three outs and you force a Game 3. The Indians closer was a perfect 16/16 on saves this season, but you knew it was only a matter of time before that blew up in Cleveland's face.

Stanton led off with a walk and was pinch ran for by the Sock Man. Gio then went down to scoop an 0-2 slider basically on the ground into center for a base hit. On a 3-2 count with two on and nobody out Gleyber chopped a ball just over the head of Hand. The Yankees needed some luck in this one and it came right here. Hand could not come up with the ball cleanly and allowed Gleyber to reach on an infield single.

Shit almost reminded me of For Love of the Game in the 9th inning as the ball goes off Billy Chapel's glove. Unfortunately for Cleveland, there was no infielder magically there to make the play like in the movie. The bases were loaded with nobody out. Gardy struck out on a 3-2 fastball down the dick leaving it to Gary Sanchez to keep the Yanks alive. He did his job lifting a ball to center that was deep enough to bring home Tauchman to tie the game. Gary's sac fly meant who but DJ LeMahieu was due up with a runner in scoring position and the game on the line. As a pitcher here, you cannot possibly be more overmatched. It's what he was put on Earth to do: drive home runners in scoring position. Ice in his mothafucking veins.

He even smiled…What the fuck!

Death. Taxes. DJLM with RISP. Practically the only words I live by these days. No joke if they don't pay this maniac in the offseason I will never recover.

The Yankees had retaken the lead and were headed to the bottom of the 9th 3 outs away from San Diego and the ALDS. After allowing a two out strikeout to reach first (shoot me), the left hander got Austin Hedges to strike out and give the Yankees the W. Holy moly.

The game was delayed when it wasn’t raining, then it started, then it poured. Two guys trespassed and tried to sit in the stands, promptly being arrested. Gio Urshela's slam, gold glove all world defense, and clutch 2 strike hitting in the 9th. Stanton's great at bats. Tanaka gutting it out. DJ LeMahieu's clutch go ahead hit when it mattered most. Gary's much needed sac fly. Chapman's six out performance. It all resulted in one helluva series clinching W. This team refused to die. A relentless effort offensively. A World Series championship caliber performance. Sure the pitching was a bit of a mess, but that's how it goes sometimes. They just found a way. I am so glad they do not have to play on Thursday for their sake and my own.

Now San Diego awaits. Joining them there will be the Tampa Bay Rays. Of course this is how it goes. A budding rivalry that escalated greatly in 2020 where both sides despise each other. It's only fitting these two battle it out with a ticket to the ALCS on the line. I cannot fucking wait. What a win. Short Porch is out, go listen. I'm so fucking tired, but we're moving on baby.